MADONNA: REBEL HEART TOUR Is On Its Way Comments (0) 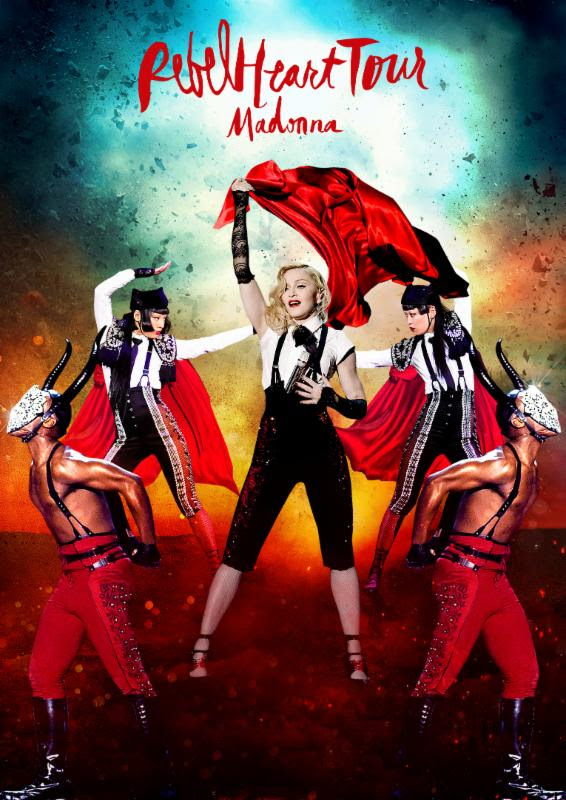 Madonna's Rebel Heart Tour will — finally! — be released September 15, 2017, by Eagle Vision in the form of Madonna: Rebel Heart Tour as a digital download, DVD and Blu-ray with bonus content, and as an audio CD with “highlights” (22 songs) from the wildly entertaining tour.

The MADONNA: REBEL HEART TOUR film was recorded around the world and features both live and behind the scenes material, as well as previously unreleased footage culminating with performances at the Qudos Bank Arena (formerly known as the Allphones Arena) in Sydney, Australia in March of 2016.  MADONNA: REBEL HEART TOUR is co-directed by Danny Tull and Nathan Rissman, both of whom have worked extensively with Madonna on her feature films and tour movies.  The DVD Cover art was designed by Madonna fan @_AldoDiaz.  A version of the film previously debuted on Showtime in December 2016.
The tracklist for MADONNA: REBEL HEART TOUR film and live concert album span all decades of the iconic superstar's illustrious career, including songs from her chart-topping Rebel Heart album to classic fan favorites. Of particular note to longtime fans will be the new interpretations of some of Madonna's timeless hits.
Praise includes: Madonna is Unstoppable (New York Times); Doesn't Miss a Beat (Washington Post); the Queen of Pop...an inspirational figure (LA Weekly); the ultimate professional(Entertainment Weekly); on fire (Rolling Stone); an authoritative diva far from the end of her reign (Time Out New York); the genre's greatest icon (Boston Herald); immeasurable (Detroit News); Queen of the World (Willamette Week); bigger, if not better than ever (San Diego Union-Tribune).
Produced by Live Nation Global Touring, the Rebel Heart Tour kicked off on September 9, 2015 in Montreal and visited arenas in 55 cities on four continents over seven months. Madonna performed 82 shows, plus the special Tears Of A Clown fan club show in Melbourne. The tour grossed $169.8 Million with 1,045,479 in attendance, making her the top grossing touring female artist in the history of Billboard Boxscore with over $1.31 billion in ticket sales sold over the course of her career. Madonna is also the fourth top grossing touring act since tracking began in 1990.
The Rebel Heart Tour was directed by Jamie King with musical direction by Kevin Antunes (with band keyboardist Ric'key Pageot, drummer Brian Frasier-Moore, guitarist Monte Pittman, and background vocalists Kiley Dean and Nicki Richards), lead choreography by Megan Lawson, hair by Andy LeCompte, makeup by Aaron Henrikson, and costume design by Arianne Phillips.

I loved this tour and saw it several times. It's filled with blasts from the past as well as her best current work, with very few missteps. I'm wondering if she'll have a premiere party for this?