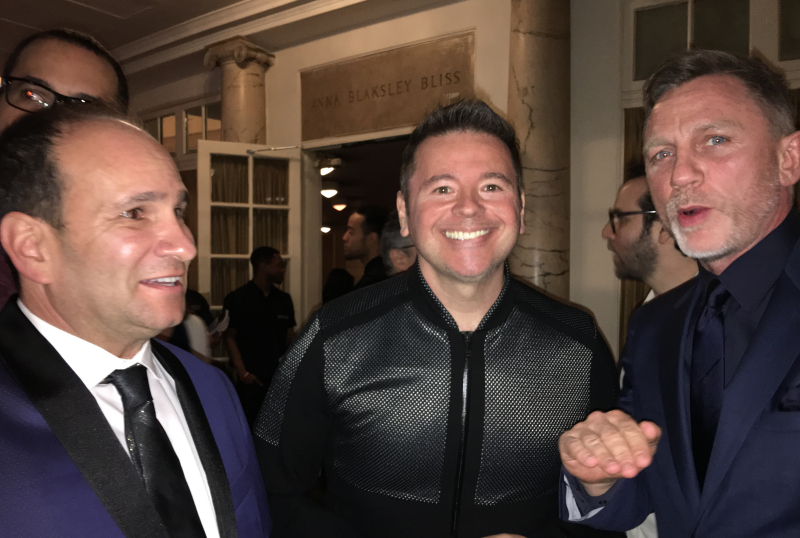 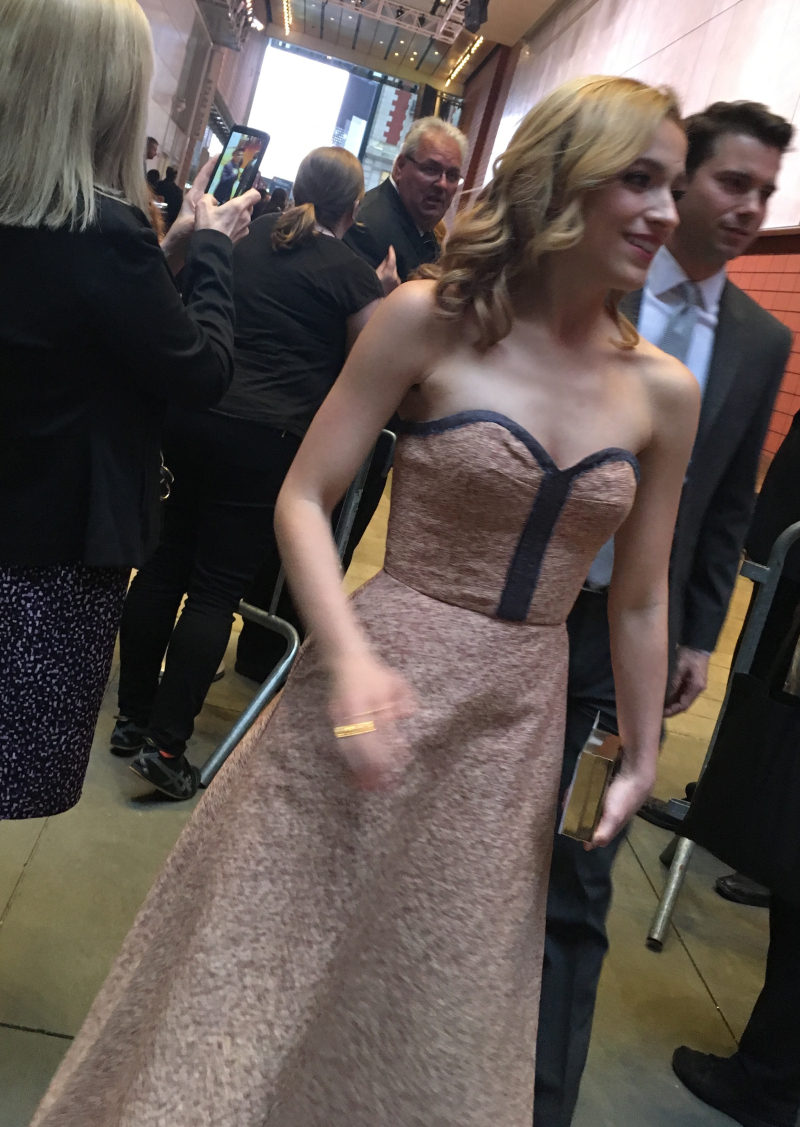 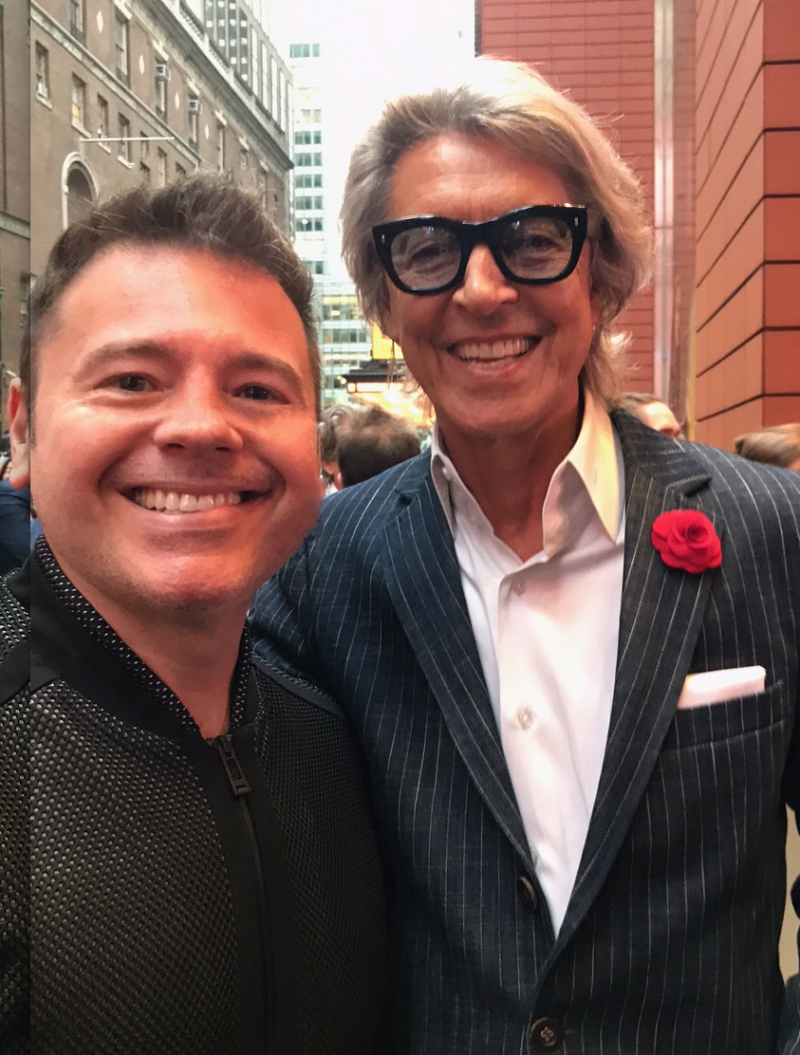 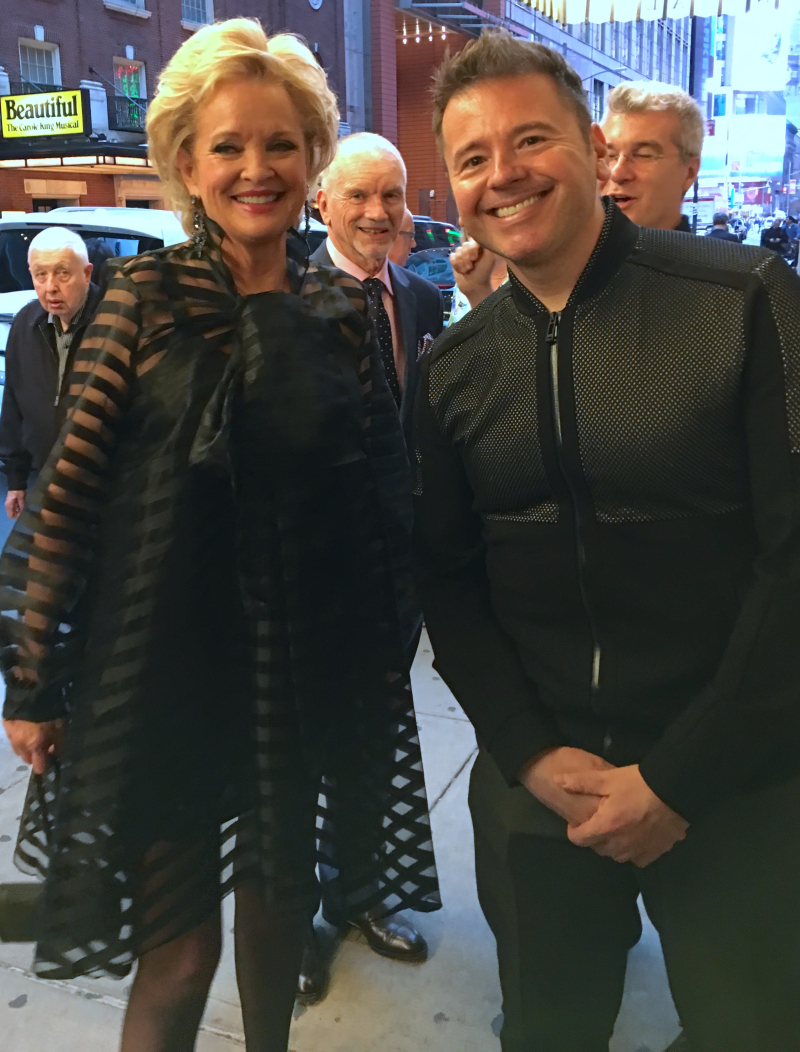 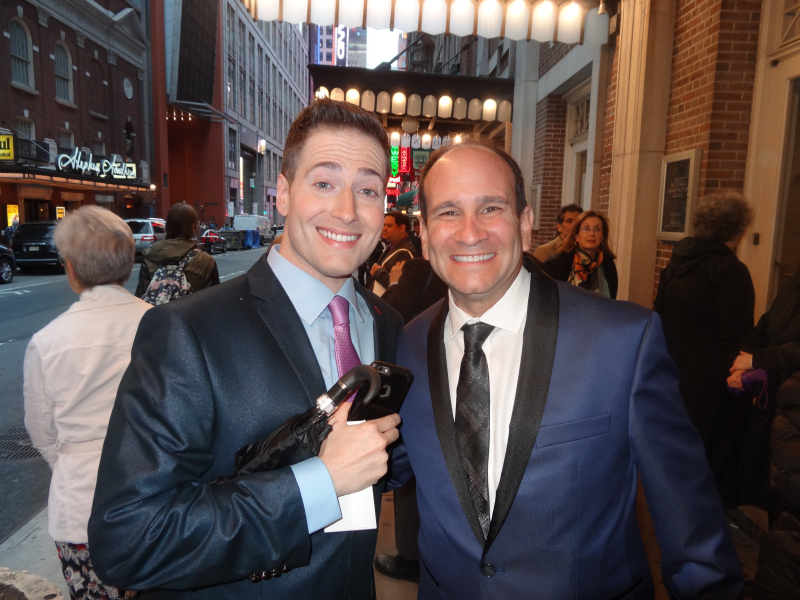 I was embarrassed to run into Seth Sikes, the singer who is also an A.D. on Bandstand; he's a star in his own right and here I was stalking celebs. Oops. I also later realized my neighbor does the PR for the Drama Desk Awards, and that a good friend of mine is apparently very close with Christine Ebersole! Wish I'd known that last one; we had a devil of a time getting her to stand still for a shot as she entered the building. (She was very nice, just busy, and the man with her praised our patience.)

The funniest part was that Mike #1, who brought me, was dying for Daniel Craig, but we all figured he wouldn't show. When Mike #2 was off asking Kevin Kline for a pic (“No. No. No. No. I don't do pictures.”), I totally spied Craig at the bar in the theater's lobby. I told Mike #1 to get over there and took his phone, prepped to get him a pic and hopefully one for me, too. He asked Craig and the response was, “Can I get my drink first?” followed immediately by, “Did that sound angry?” 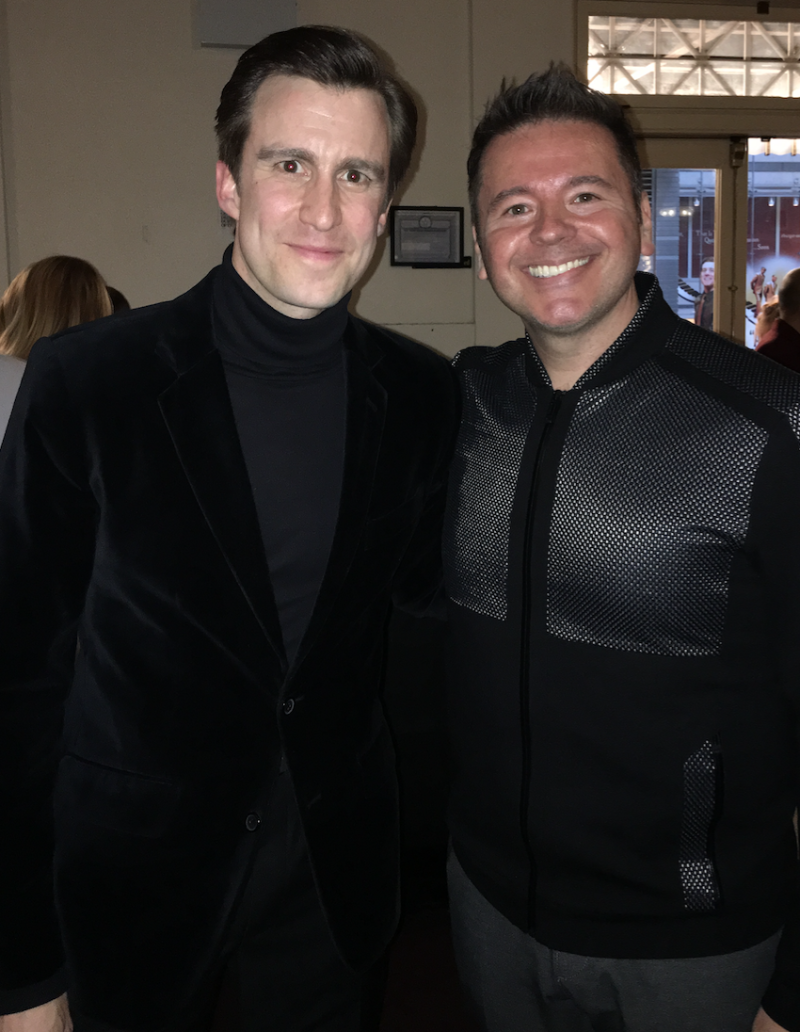 Had the feels for Creel! (Image by Mike Summers)

He was goodnatured enough, but made us wait 90 seconds while his drink was 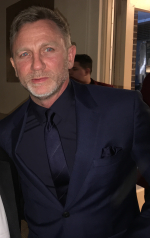 painstakingly prepared and his handler was gravitating back to run interference. When he was almost set to do it, Mike #2 saw us and sensed we were on the prowl, asking who we were waiting for... right in front of Craig ... then wanted his own pic, too. (Love ya, Mike #2!) That was it for Craig; he did one for Mike #1 then insisted that he'd only do one more, which meant Mike #2 and I would have to share. Fine by me! Mike #2, who has more celeb pic-withs than anyone I know, is a stickler for being alone in it, but Craig, irritated now, firmly said, “I'm doing one more. I'm drawing the” — CLICK — line.” The show was fun. We had Jane Krakowski in front of us, and she was beyond gracious afterward. She also stole the show, kissing winner Kevin Kline then doing a pratfall as if swooning. “It's called scene-stealing,” he ad-libbed drily. (His acceptance speech was a riot, and when he left, he did do a pic for longtime celebrity shooter Gary Lee Boas.) 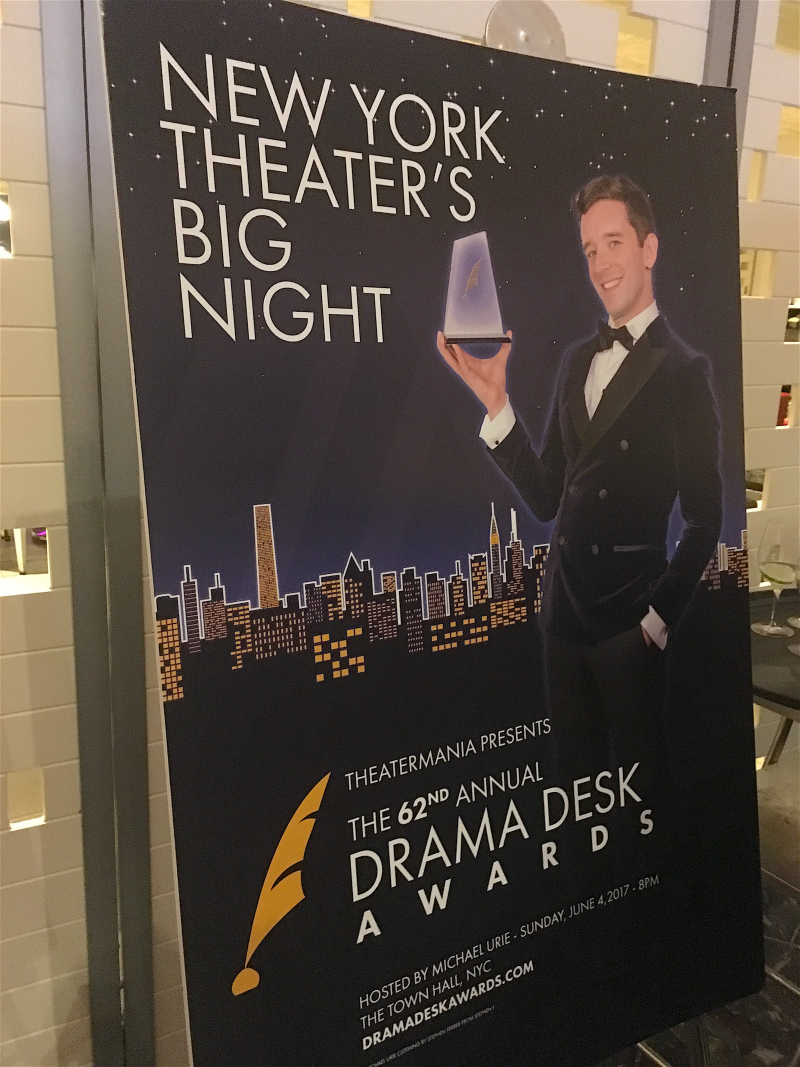 After-party all the time! (Image by Matthew Rettenmund)

Michael Urie was a great host, and though there were quite a few technical awards that weren't exactly riveting, the show held our attention. Aaron Rhyne, who won for Outstanding Projection Design, had Mike #1 and I falling in love (with him) and hs speech, about his mother's struggle with cancer, was the most affecting of the evening. (He turned out to be a humble doll at the after-party, too.) One unfortunate aspect of the show as a dreadful woman in the row in front of us (and sitting next to Mike #2) who kept taking photos of every single person onstage, not bothering to be discreet (photography wasn't banned, it was just her screen was bright), and talking loudly, being disruptive. The woman behind her gave her the tap and the woman SEETHED not to touch her, so another man kept chastising her and clapping loudly in her ear to fluster her. Did. Not. Work.

With big winner Bette Midler not even there to accept (c'mon), at least her co-star Gavin Creel was on hand to get his award! I've met and interviewed him; I think and hope he kinda-sorta knew who I was, and we posed for a pic in the lobby. Glad he won — great person, great show. 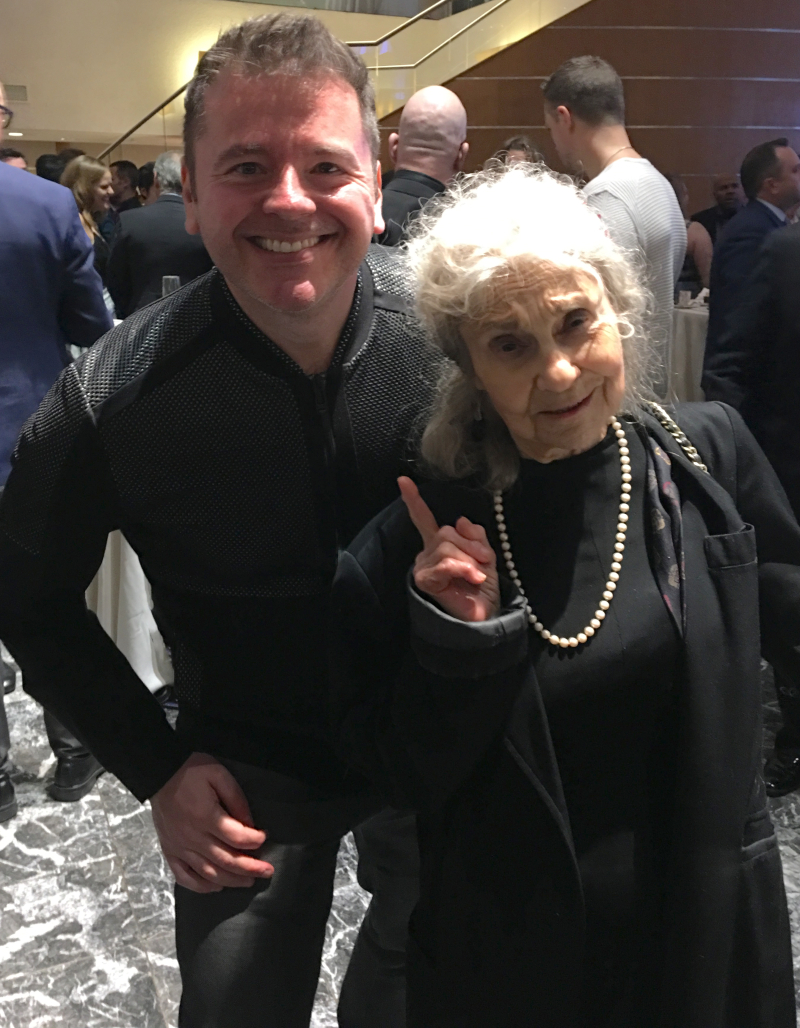 With the utterly amazing Lynn Cohen, 83 and partying her ass off. (Image by Mike Summers)

Afterward, the starfuckers wanted Hal Prince, but he never emerged. Instead, we headed to the after-party, where we bumped into winner Laura Linney and met the very kind Lynn Cohen, who humored all of us with funny pictures. Wanted to steal Andy Karl from his wife, but his wife is Orfeh so — I lose. (Image by Michael Stern) 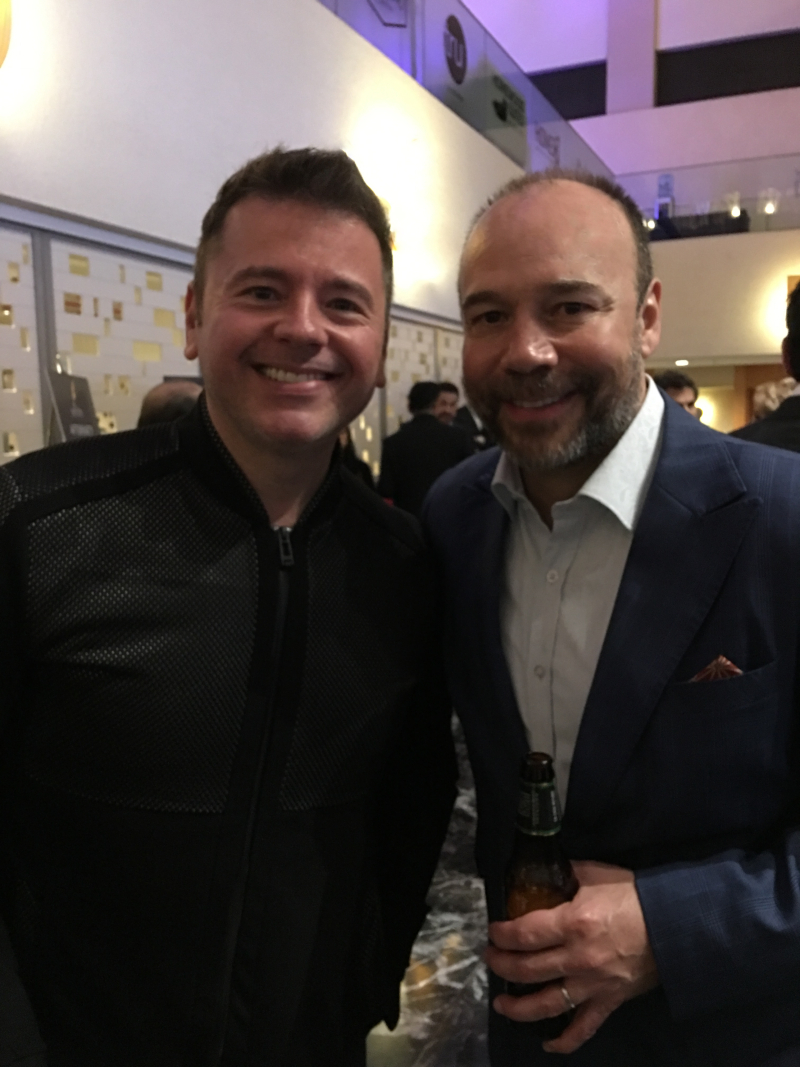 Also had a chance to tell Ryan Spahn, Urie's BF, how amazing he was in Daniel's Husband, say hello to Michael Musto and the hilarious Drew Droege, and to eat like a pig.

I think the boys were mostly happy with their haul, even if all Bettes were off.

P.S. Whoever this guy is, I want to take him to Bermuda: 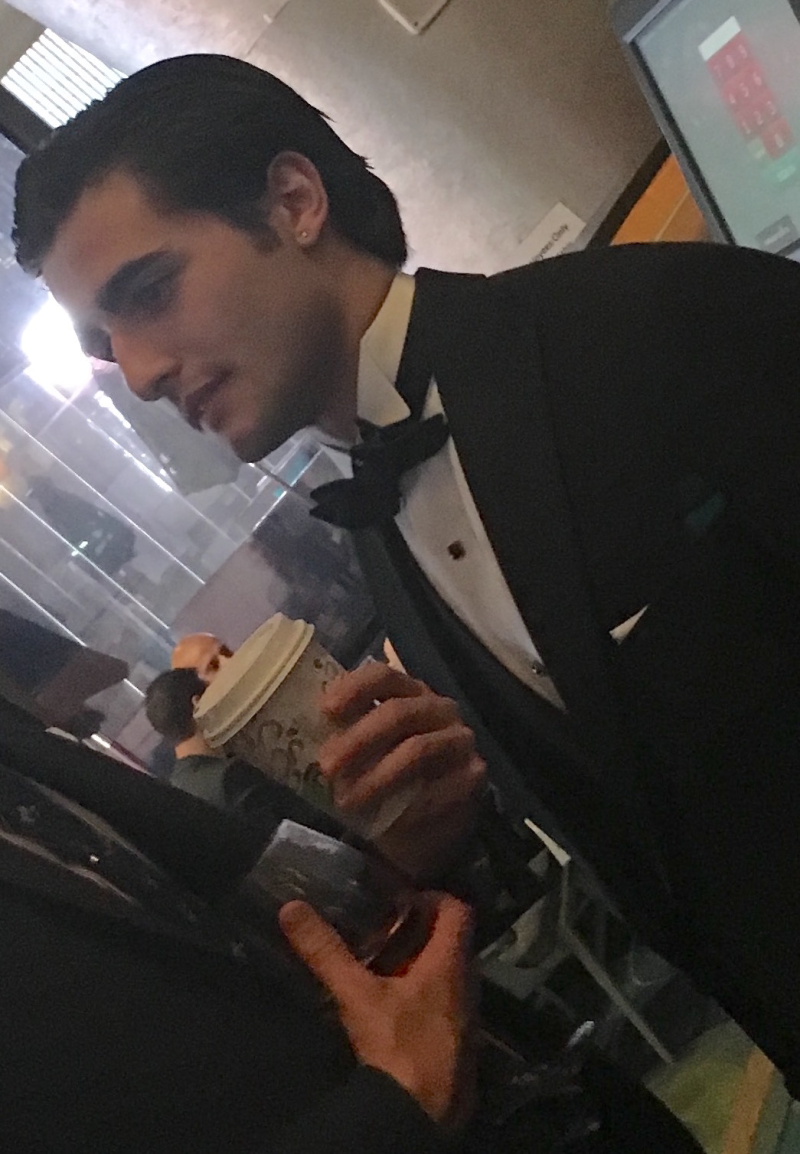