Madonna's fans are not often thought of as teenagers, let alone tweens, but one Idaho (material) boy is challenging that stereotype.

Joshua Emara, 13, is a talented violinist, one who plays for tips in his native Idaho to hone his skills ... 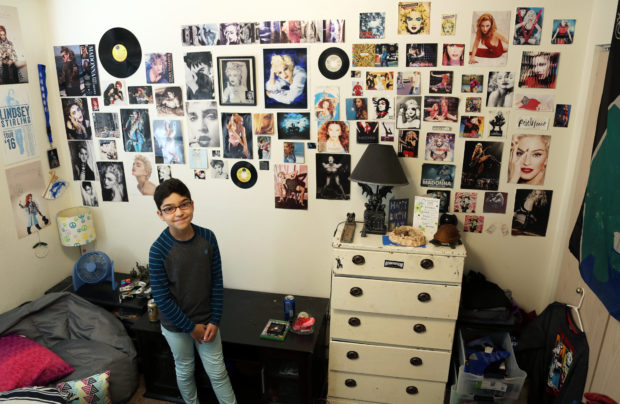 Looks like my room 30 years ago! (Images via IdahoEd News)

Via IdahoEd News: Emara, who identifes as a plancer (a violist who dances), has been a huge Madonna fan since he was 3, when he would watch her Confessions Tour on TV with his mother, mimicking her dance moves at block parties.

Today, his room boasts dozens of photos of the pop idol, who he says inspires him “because she never cares what anyone thinks of her and she is constantly surprising people and pushing the boundaries. I want to have a similar outlook on life.”

Now, he is known as a performer at the Capital City Public Market on Eighth Street in Idaho, where he shows off his skills and hopes to be a Juilliard student one day.

Performing at the market started when Joshua needed to pay for science camp. Hedidn’t want to be part of a cookie fundraiser with fellow students. The market is now opening doors for gigs. His market exposure has led to the free production of a music video, performing jobs in Twin Falls for the Special Olympics. And this month, Joshua performed at his first wedding.

“All I wanted to do was perform in front of people,” Joshua said. “I never thought it would turn into this.”

His next goal is to head to Las Vegas and audition for America’s Got Talent in December.

“I think I have a shot at winning,” Joshua said.