Waiting For You: A Review Of THE WAITING GAME Comments (0) 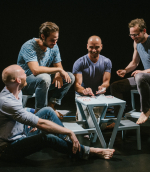 I had the pleasure of seeing Charles Gershman's The Waiting Game, directed by Nathan Wright, at 59E59 last night, as part of the East to Edinburgh preview of plays heading to the Edinburgh Fringe.

Short — just an hour — it is the mercurial story of two men battling for the moral high ground after the lover they shared, Sam (Ibsen Santos), has long been on life support following a drug overdose. Keep reading for a full review of the sexy gay play ...

Marc Sinoway plays Paolo, Sam's sardonic, hostile husband who does meth any time things threaten to get too real. Joshua Bouchard is Sam's committed lover Geoff, also a fan of the pipe, who thinks it's time to let Sam die. 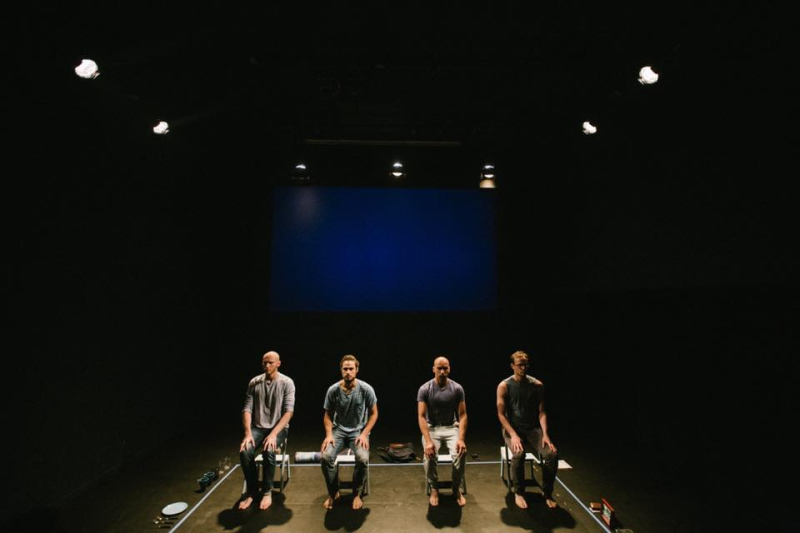 A coolness to The Waiting Game makes it feel like a reliable witness to all it reveals. (Images by Paulo Salud)

Caught in the middle is Kellan Peavy's Tyler, who is dating Paolo and can't shake the ghost of Sam — or the encroaching threat posed by Geoff.

Hovering over them all is Sam — the actor has no lines and is used more as an artful prop — who does not speak and is said to be brain-dead, but may be communicating with Paolo via Gchat.

The time period of the play is a bit confusing in a bad way (Gchat, a stray plotline about intentional HIV infection in which an undetectable status is never mentioned), but its staging is a bit confusing in a great way — the actors set up and strike all set elements themselves in a balletic way that allows the play to ever so slowly present itself, and to artfully recede in the end. Perfect marriage of content and space; ironic for a play whose conscious characters are struggling with imperfect marriages and “marriages.”

The dialogue is sharp to the point of being painful — those boys in the band had nothing on this band of boys, who are intent on pushing each other's buttons to test the limits of their feelings for one another.

Superb acting all around. I've seen Sinoway in multiple projects and he keeps getting better and never loses his mysterious magnetism, which is perfectly suited to the anti-hero Paolo. The emotion he eventually has to unload on the audience is devastating.

The Waiting Game plays just one more performance in NYC, on July 29 at 2:30. I hear it's sold out, but give it a shot.

Tickets for The Waiting Game in Edinbugh here.