Your Place Or Ours?: A Review Of AFTERGLOW Comments (0) 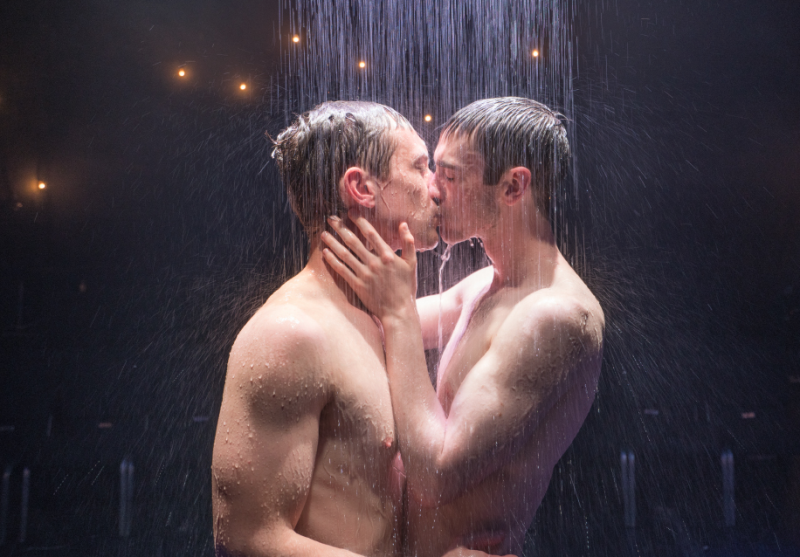 Josh (Brandon Haagenson) and Alex (Robbie Simpson) are a privileged married pair, Josh a director so successful his husband wouldn't have to work if he didn't want to, and Alex an industrious would-be chemist. They've paid a surrogate to carry their presumably perfect baby because they think they're genetically gifted, or so they joke ... or so they say they joke. At one point, Josh says to his husband, “We're young and hot,” in the context of wondering why they don't have even more sex than they already do, and he also marvels at how he's in the best shape of his life.

It's hard to love these guys immediately. 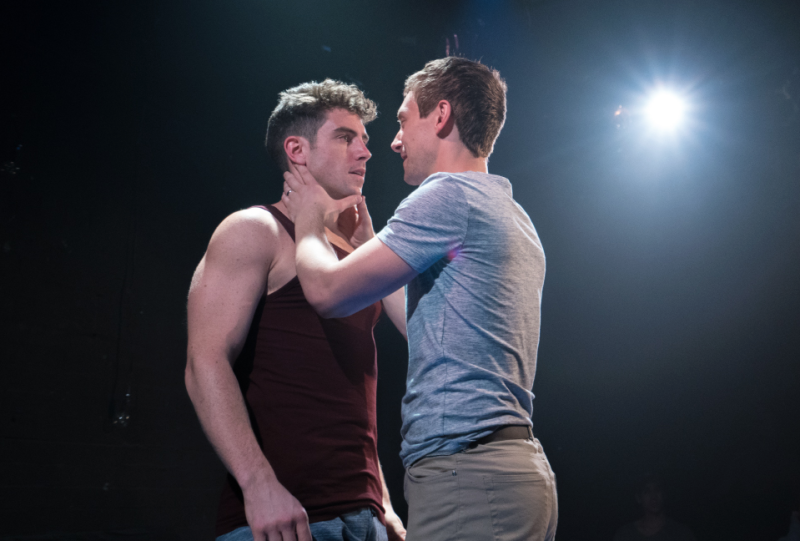 Robbie Simpson & Brandon Haagenson. If the dude on the left were my husband, you'd never even meet him.

Add to the mix Darius (Patrick Reilly), the masseur they frolic with one evening, and their having-your-cake-and-eating-it-twosome is well on its way to something else, with Josh becoming romantically attached to Darius right away. They set up alone time with Alex's unconvincing approval, and quickly fall in love, against Darius's better judgment.

Afterglow fails as a play about polyamory — it feels nakedly (and the amount of frontal nudity is remarkable) anti-polyamory from the beginning, instead resolving as a fairly straightforward story about how good people often fall for okay but extremely selfish ones. What it offers, on the down side, is some vapid talk from adult gay men who at times express themselves like teenage girls, and, on the up side, eventual emotional pay-off when everyone stops pretending and says exactly how they feel.

The acting is uniformly fine here, with each performer pouring heart and soul into lines that don't always deserve it; having Josh quote Woody Allen to defend his feelings is predictably unsuccessful. One thing Gelman does well is create gay water cooler scenes; it's no The Boys in the Band, but his Afterglow will have audiences debating afterward. Hell, a couple of guys were murmuring approval/disapproval of the characters' actions during the play the night I caught it. It's that kind of play, where you will find yourself choosing the person you relate to the most.

Not to be overlooked: Ann Beyersdorfer's stage design and Jamie Roderick's lighting design are magnificent, mesmerizing and modern. The play incorporates a fairly sensual overhead shower and smartly interlocking pieces the actors are forced to stagehand around; and yet this device gives the play some balletic depth, and allows us to glimpse emotions from the characters even when they're not technically on. The lights follow the action like a nosy stranger, and underscore important moments subtly and with style, such as when a nighttime romp on the roof is effortlessly romanticized with stars that glitter in the sky, and also below. The tech is just a knock-out.

Ultimately, Afterglow did not turn me on, but it definitely provoked thought on the topics of sex, relationships and family as seen through a contemporary gay lens.

Afterglow has been extended through August 19 at the Davenport Theatre (354 W. 45th St., NYC).