I had a very unusual experience at the Blondie gig last night, which was the latest stop on their Rage and Rapture Tour 2017 with Garbage.

See, lots of good stuff happened, but lots of bad stuff happened — and yet, I think it could be that the resolution was so appropriate, it wound up being a positive experience overall.

Plus, it's always nice meeting Debbie Harry! Keep reading for a full review ... 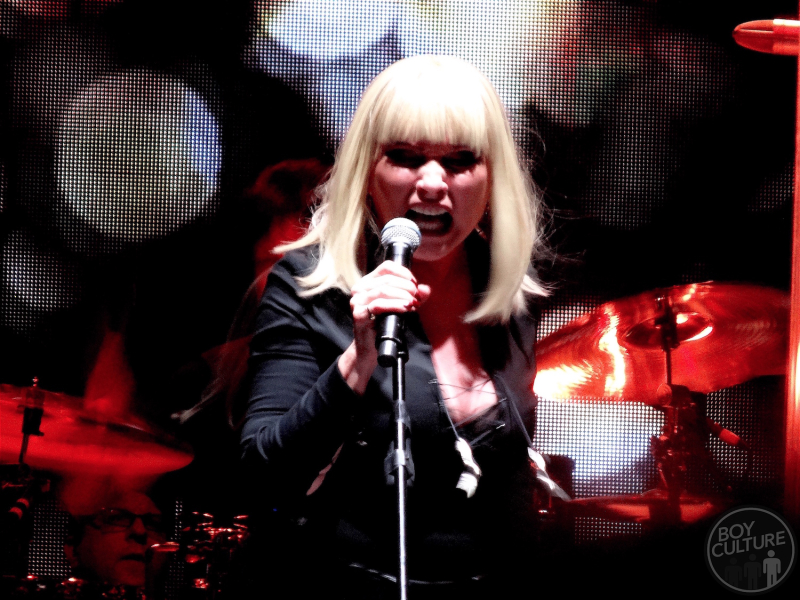 This reminded me of the “Maria” video. (All images by Matthew Rettenmund)

First, my friend and I splurged on meet-and-greet VIP packages, which ran us $300. For that price, we were guaranteed amazing seats, a pic with the band, a chance to get their autograph and a Pollinator gift (the new album is thought by many to be their best since reforming, though I'm also very partial to The Curse of Blondie). 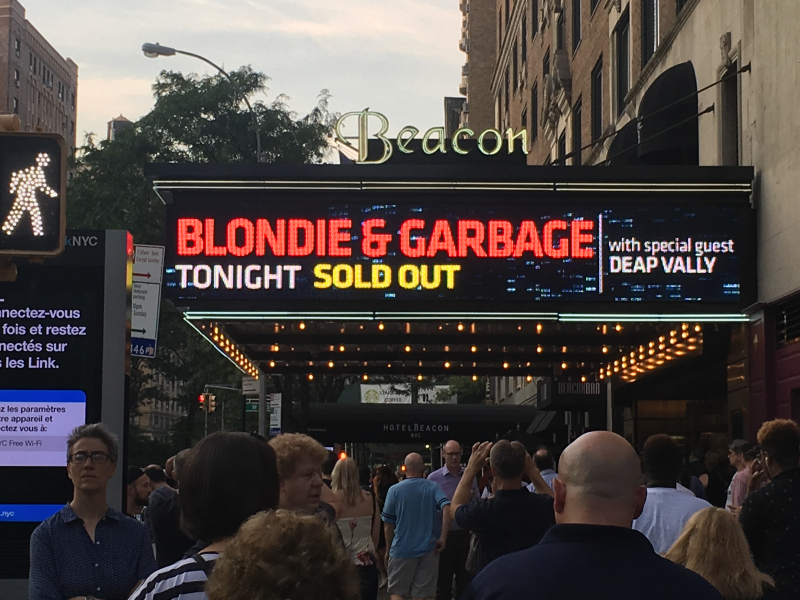 Scalpers were ferocious. One literally tried to put his hands on my tickets as I showed them to my friend!

One bummer for some (not me) was that the M&G was scheduled to occur at 8:30 p.m., just under an hour before Blondie's set, which cut into Garbage. I am not a fan of theirs, so didn't mind, but it kind of devalued your ticket a bit.

Plus: Met lots of fun friends at the M&G, including a new, cute one. 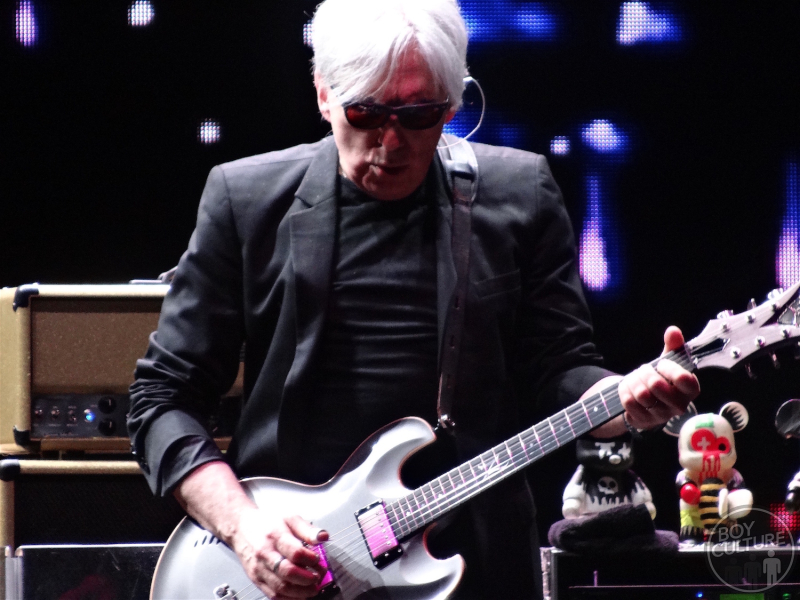 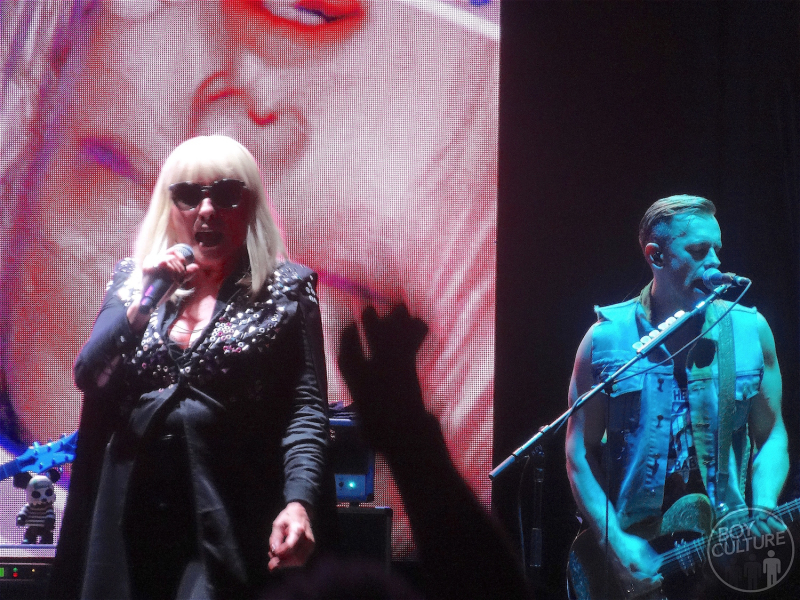 Minus: When I was handed my VIP tickets, it was apparent they sucked. We were in row H, which is quite  far back at the Beacon Theatre. Others were in the very front rows, while still others were even further behind us. Luckily, we were surrounded by pals, including a longtime blog reader and his hubby. 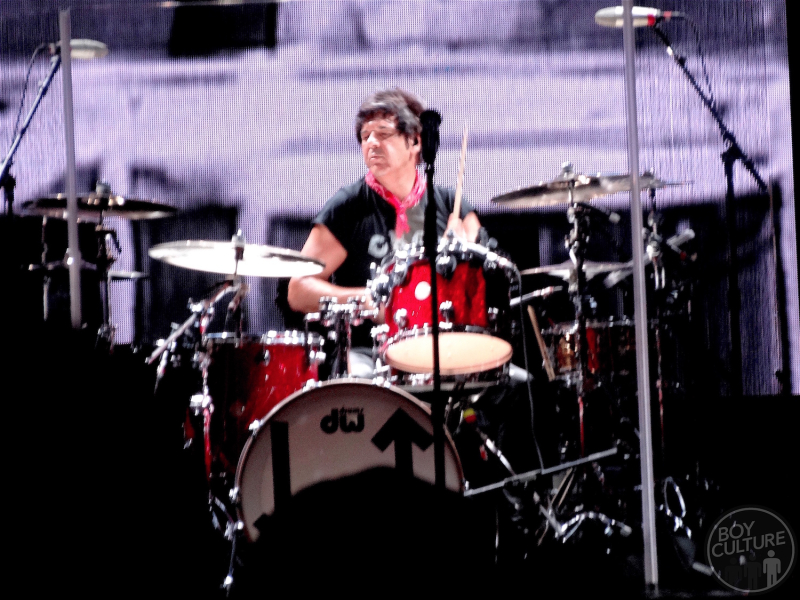 Clem Burke, one of the world's best drummers

The M&G itself was not too disastrous, though I would've done things a bit differently. We were herded downstairs (the staff was 100% respectful and nice, probably the most uniformly accomodating I've ever witnessed), where the band would pose against a blue curtain. What sucked was they were standing under an icky fluorescent light — and no flash was used! I may be prematurely pessimistic, but it seemed to me a little pro set-up with flash would have been easy, cheap and would have resulted in outstanding images. 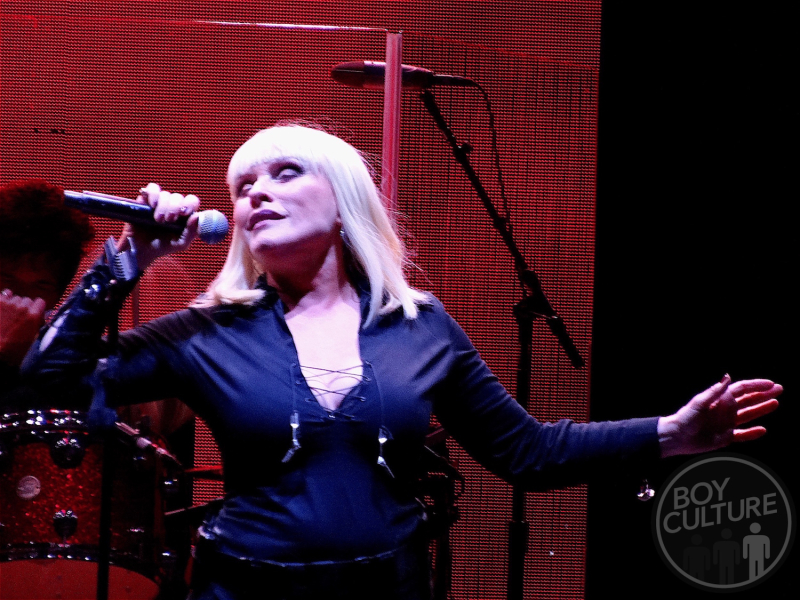 Her hair was beautiful ... 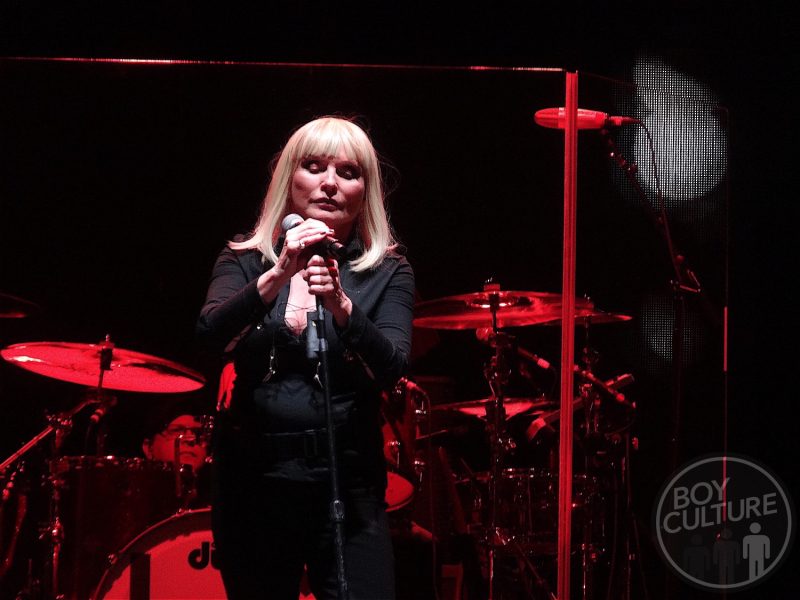 Do you love her now?

Also, we had received an email a day before (!) the event letting us know they would not sign anything, but would instead hand us a signed Pollinator vinyl album. Fans tried to break this rule, but were unsuccessful.

As for the actual interaction, what stressed me out was that the band members were positioned where they wanted to be and did not move! So you had to try to awkwardly insert yourself without their participation. (This was further complicated by the email's warning not to touch the band members without permission. Debbie, may I touch your left breast?)

So... it was like squishing into a bunch of statues. 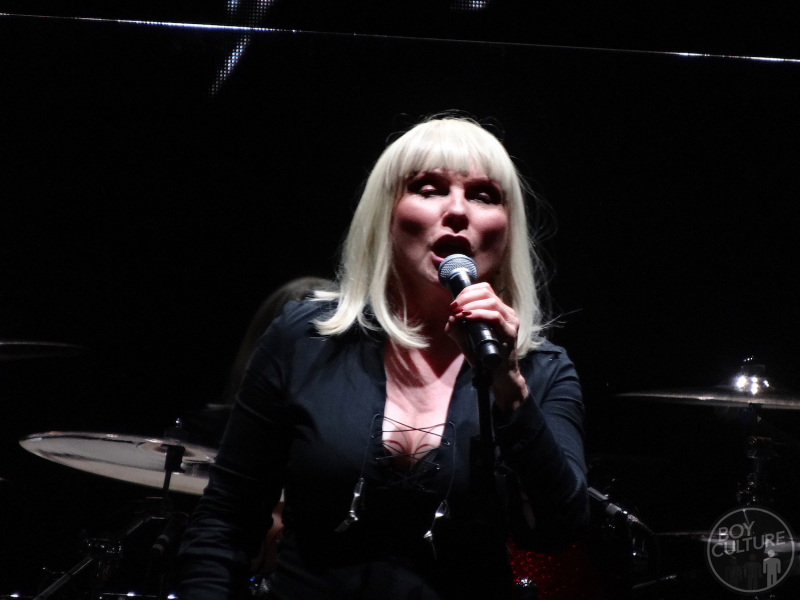 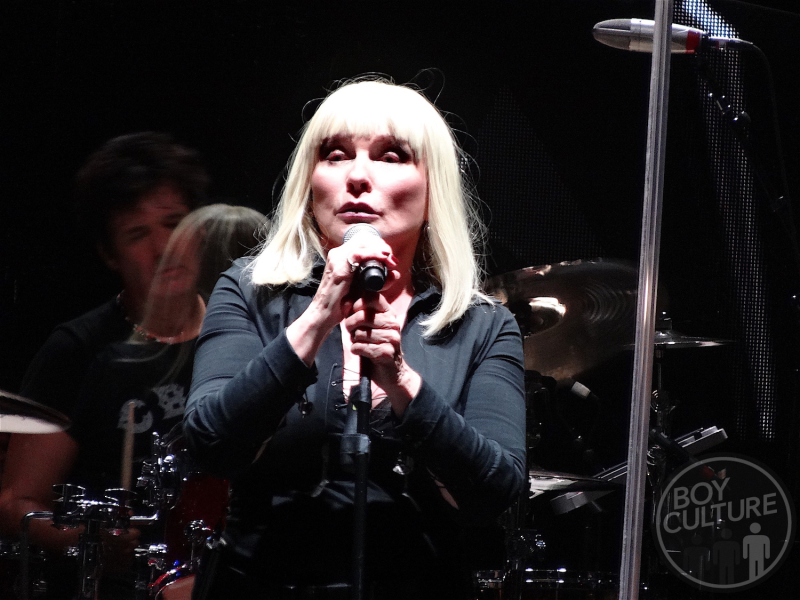 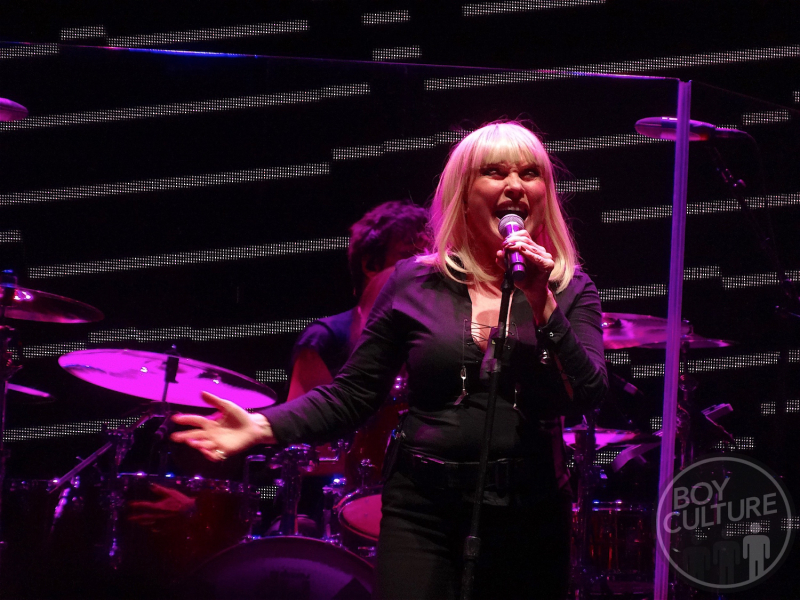 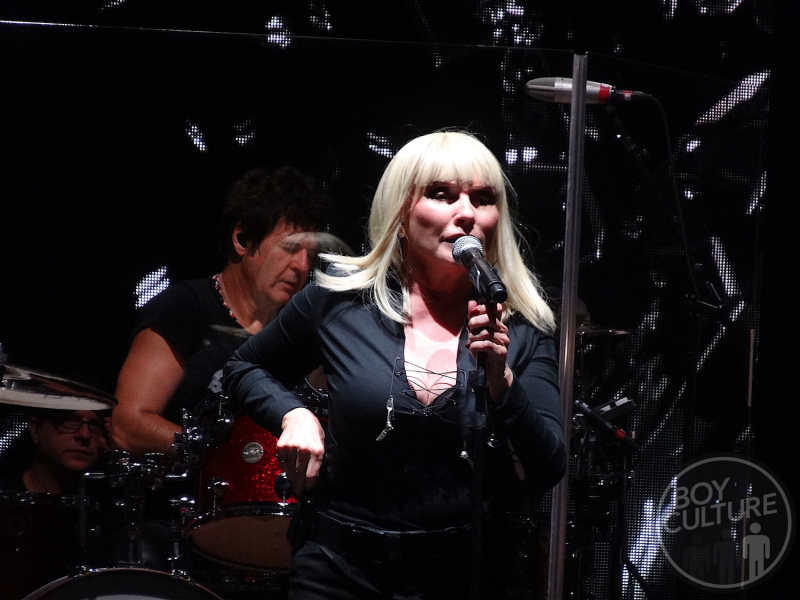 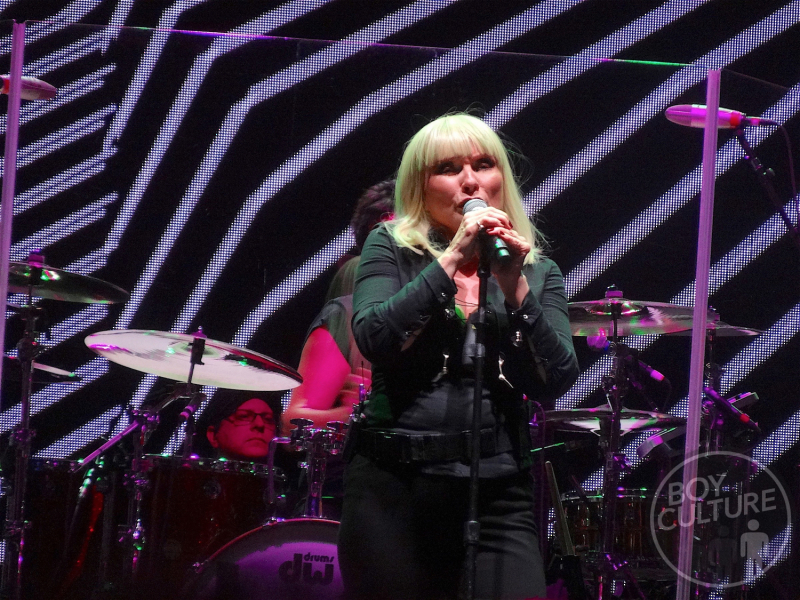 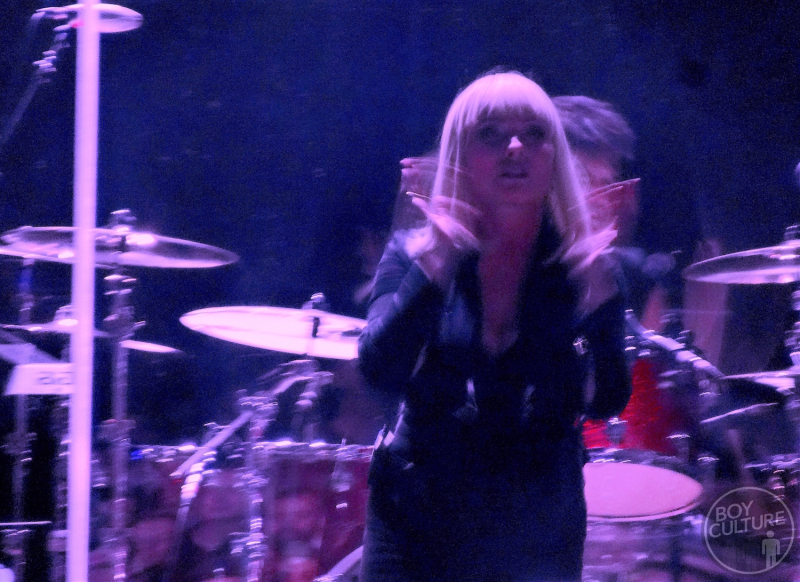 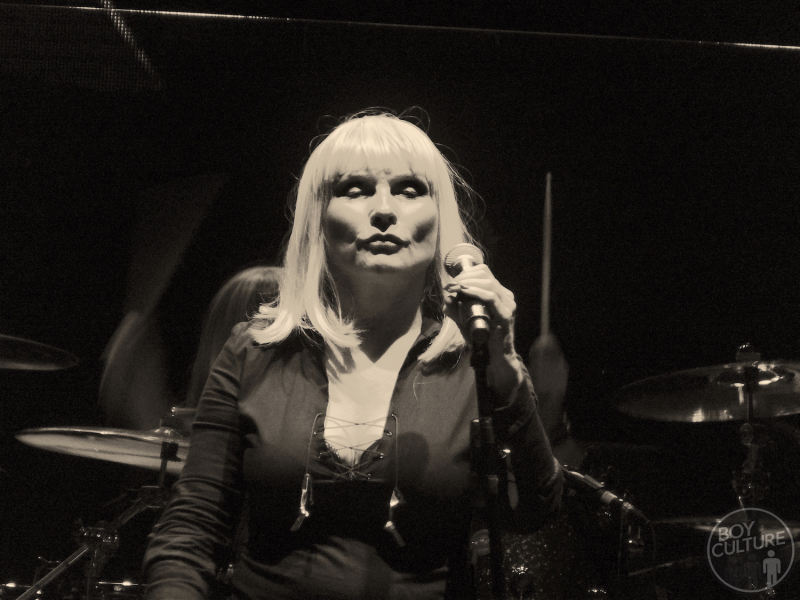 Debbie in action. She would have looked way better, but there was literally no light on her most of the show.

None of this is to insult the band — they were fine, and Debbie was welcoming to me. She said she loved my shirt, which was more than most got. Also, the biggest, best plus of the M&G experience was that Debbie looked stunning, exactly as you would want her to look for a photo op, with a striking blonde wig. (One person went to put his arm around behind her and caught some of her hair by mistake, to which she reportedly warned, “Don't pull on my hair.” Seems reasonable.)

But reports of the band being rude were unfounded, ast least last night. They just aren't huggers and expressive, especially on an exhausting tour.

As we left, we were to take a signed vinyl album. Once upstairs, five of us (out of the 50ish who were there) realized Debbie's signature was missing from our albums! Unreal. So we found another extremely nice staffer, who promised to help us after the show. (After the show, she politely told us Debbie wasn't signing anything that night — the band walked offstage and out of the building — but swore she would replace it, so I am anxiously awaiting that in the mail. And a couple of cheeky fans slipped in non-Pollinator items on the off chance that she might sign after all as a make-good.)

We took our (bad) seats, and Blondie came out and played a great show, truly. My friend, who has seen countless shows, actually called it his favorite, even in spite of the disappointing events leading up to it, and our seating.

Debbie emerged in a fantastic alien-bee mask and a cape emblazoned with the command “STOP FUCKING THE PLANET,” in keeping with the album theme, and they tore through “One Way or Another” and “Hanging on the Telephone” (Debbie joking about the lack of phone booths).

Their first new song of the set was their single Fun, easily their hottest lead single in a decade. The crowd loved this and all their 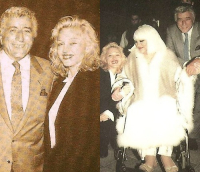 other new tunes, which never happens at legendary artists' shows.

Next came “Call Me,” one of my favorites, and the new track My Monster.

“Rapture” received a rapturous response and, as always, Debbie broke into her punk-spasm dancing. As an aside regarding Debbie's age — 72 — please note that when Peggy Lee was 72, she was wearing an almost identical wig, but was confined to a wheelchair (Pictured: Image via atrl); people age differently, and aging has changed in the past 25 years, but we should be grateful we have this woman still out there “doing the punk rock.”

A cover of Dylan's “Rainy Day Women #12 & 35” got the crowd revved up and precipitated a little pot smoke and a cover of “Fragments” by Unkindness, Pollinator's closing track, had the place reacting as euphorically as if they were hearing a classic hit. It was followed by “Too Much” and the anthemic “Long Time,” also from the new CD, and the last newbies.

Unfortunately, Debbie really can't do justice to “Atomic” anymore. It's maybe my favorite Blondie single, but she just can't do any part of that song well, so resorts to straining and speaking every time she does it, but the finale “Heart of Glass” was stellar. 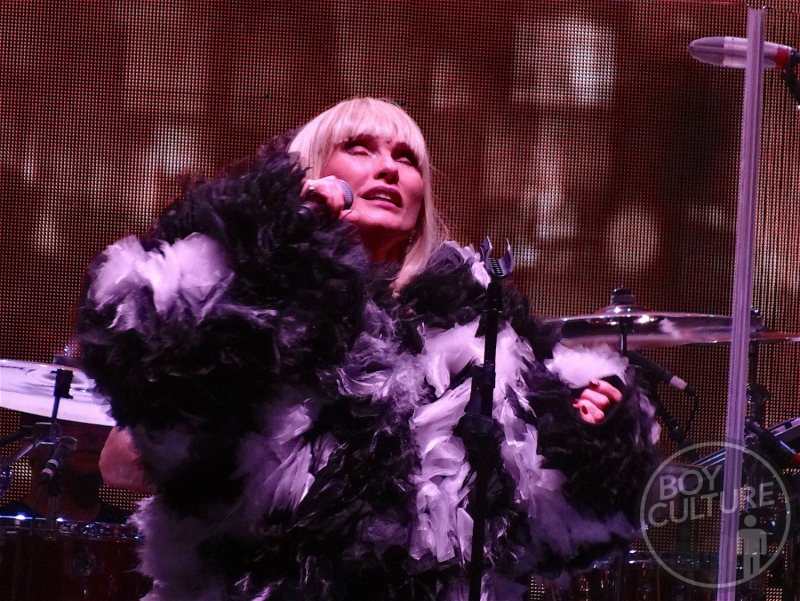 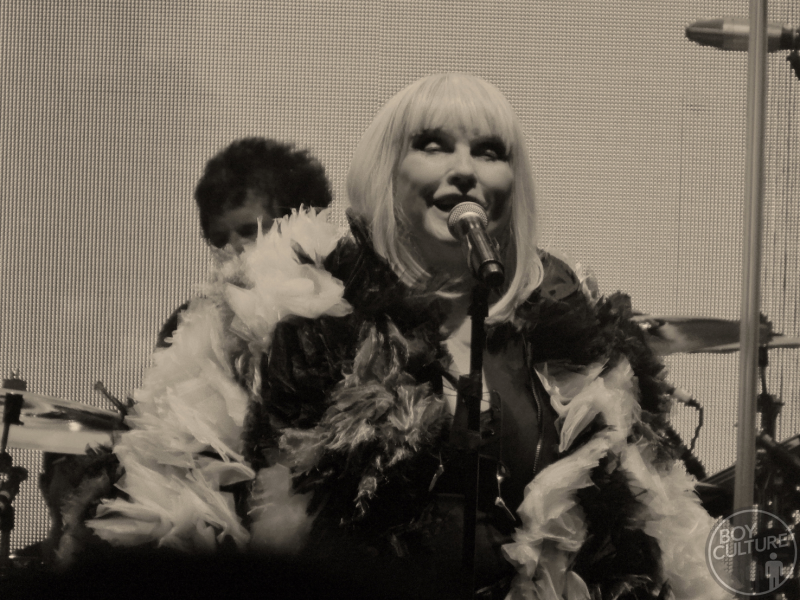 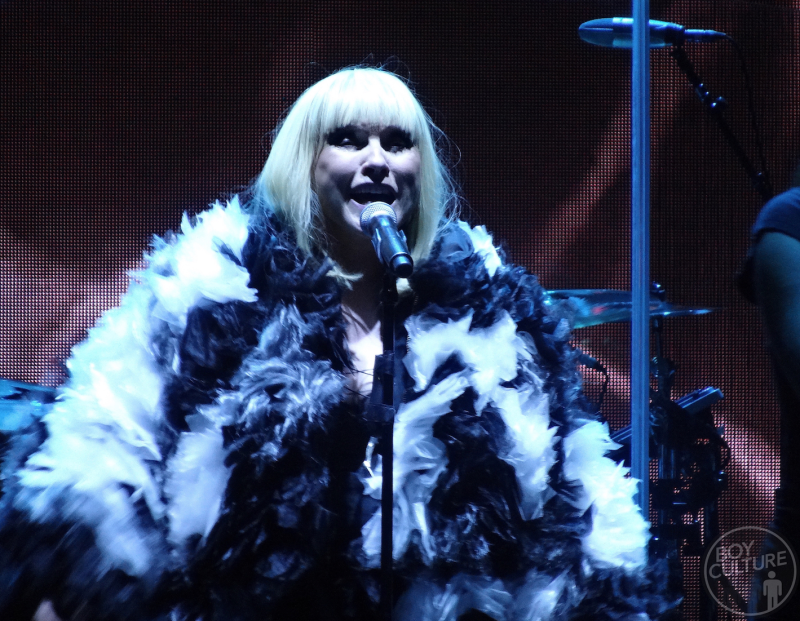 After leaving the stage briefly, they returned to favor us with Dreaming,” one of their best-sounding classics, and an overwhelming take on “The Tide Is High” that made use of a gigantic, diverse, rag-tag band. There was even a tuba in there, and Debbie was having a blast in a fluffy coat that rendered her spherical.

With a warm good night, it was all over, and we filed out. It wasn't the experience we paid for (a distinction I make so no one thinks we were expecting the band to give us more than we deserved), but the concert itself was aces.

And in the end, we were given refunds, so instead of making us whole, we were made a whole lot better. Now, let's just hope the picture is not a tragedy!