Has black conservative commentator Gianno Caldwell — who was fond of claiming Hillary Clinton only cared about black votes, not black people all the while supporting demonstrably racist Donald Trump — finally had enough?!

Listen to his tearful words, delivered on Fox News Channel, about Trump's insane equivocation of Nazis with those who are fighting against Nazis ... 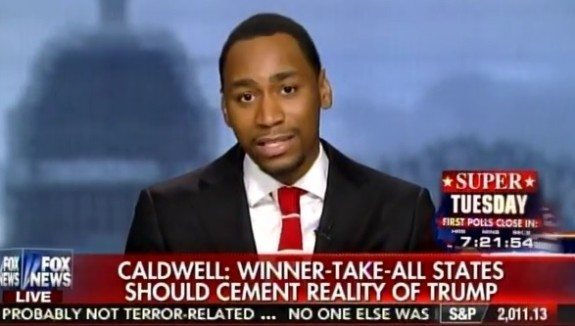 Caldwell still has not repudiated Trump in general — all he's done is weep over the president's unacceptable words at ONE press conference — and he still holds out hope that Trump will learn.

Still, nice to see some right-wingers are coming around, especially on FNC during a segment FNC hoped would refocus the debate on what to do with Confederate statuary:

Last night, I couldn't sleep at all because President Trump — our president — has literally betrayed the conscience of our country. The very moral fabric in which we've made progress when it comes to race relations in America? He's failed us. And it's very unfortunate that our president would say things like he did in that press conference yesterday when he says, “Well there's, y'know, good people on the size of the Nazis. They weren't all Nazis, they weren't all white supremacists.” Well, Mr. President, people — good people don't pal around with Nazis and white supremacists. Maybe they don't consider themselves white supremacists and Nazis, but certainly, they hold those views.

This has become very troubling, and for anyone to come on any network and defend what President Trump did and said at that press conference yesterday, is completely lost and the [potential?] of being morally bankrupt. I am sorry — no, I believe that, and I'm being very honest, as someone who's been taling about these issues for a very long time I am sorry that this is where we are right now, and I hope the president learns a lesson from his press conference on yesterday. It's disturbing.