Olympic diving legend Greg Louganis is opening up about his family history, telling PEN about the various issues he faced having been adopted and raised by parents whose love he questioned as a rebellious and confused teen.

Incredibly, he first met his biological father at age 24 while making an appearance for Speedo in Hawaii. 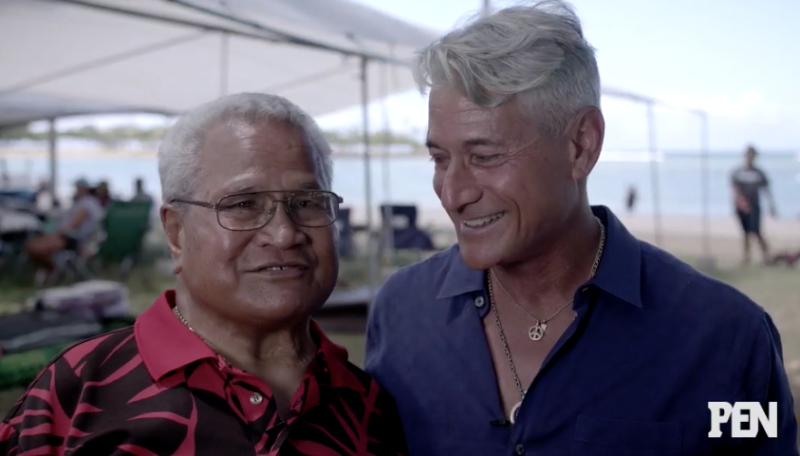 Louganis with the man he only recently called father. (Video still via PEN)

Via People: When Louganis first met his biological dad, it was confusing:

“Like me, he’s a man of few words. But he told me he’d wanted to raise me,” adds Louganis.  The diver learned that Lutu’s brother lived in San Diego and had actually been keeping tabs on Louganis and relaying updates to Lutu, but had stayed silent to protect Louganis’s privacy.

“It was pretty amazing, but I was stunned,” he says. “It wasn’t until I was on the plane to L.A. that I started to have questions.”  Despite his skepticism, Louganis continued to meet with Lutu, who appeared whenever Louganis visited Hawaii.

He never asked for anything ... he was only concerned about my happiness, Louganis says of his biological dad, a man he kept at arm's length for decades before a DNA test confirmed the man was telling the truth.

Going forward, Louganis is only looking to the future and not expressing regrets:

“We’re not living in the past anymore,” says Louganis. “I’m excited that now we can focus on being in the present and talk about what’s going on in our lives now.”  He’ll also be spending a lot more time in Hawaii.

“I have family there,” he says, almost in disbelief. “It’s an incredible gift that I’ve been given.”

Watch all of Greg Louganis: Finding My Father over at People.com.