Susan Bro, Heather Heyer's grieving mom, says she has not — and now will not — speak to Trump.

“I'm not talking to the president now — I'm sorry. After what he said about my child?”

Bro's comments to Robin Roberts on Good Morning America represent another chapter in how low the U.S. presidency can sink ... 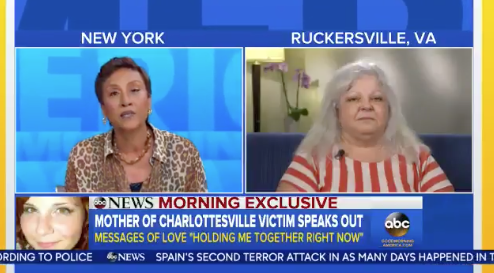 After Trump's defensive, nasty presser at Trump Tower, which Bro did not watch until well after it occurred and at which he said some white supremacists were good people, she has decided not to speak with Trump — and not to forgive him for his remarks:

At first, I just missed his calls. The first call, it looked like, actually came during the funeral. I didn't even see that message. There were three more frantic messages from press secretaries throughout the day and I didn't know why — that would have been on Wednesday — and I was home recovering from the exhaustion of the funeral, and so I thought, “Well, I'll get to him later.” And then I had more meetings to establish her foundation, so I hadn't really watched the news until last night.

And ... I'm not talking to the president now. I'm sorry. After what he said about my child? And it's not that I saw somebody else's tweets about him, I saw an actual clip of him at a press confrence equating the protesters, like Ms. Heyer, with the KKK and the white supremacists ...

... You can't wash this one away by shaking my hand and saying, “I'm sorry.” I'm not forgiving for that.

I love this woman. Watch:

Q: Have you talked to President Trump directly yet?

Heather Heyer's mom, Susan Bro: "I have not, and now I will not." (via ABC) pic.twitter.com/GKqkC4j5ov

Susan Bro to Trump: "Think before you speak."