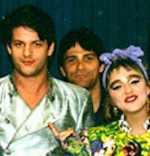 Patrick Leonard on Madonna: “I have the demos where she sang a song, having written it 15 minutes before, and it was a #1 record and remains valid 30 years later, who’s gonna tell me that’s not a real artist?” (Image by Bill Lanphier)

If you've read Part 1 and Part 2 of my long chat with Patrick Leonard, you'll want to check out this handy guide to all the times he's worked with her:

All songs are cowritten and produced by Leonard with Madonna and sung by Madonna, unless noted.

“Open Your Heart” #1 — Production only

“The Look of Love” NA

“Till Death Do Us Part” NA

I'm Breathless: Music from and Inspired by the Film Dick Tracy (1990):

“Something to Remember” NA

With Honors: Music from the Motion Picture Soundtrack (1994):

“Has to Be” NA — Co-composition with William Orbit, no production; B-side, Japanese bonus track

“Nothing Really Matters” #93 — No production

“To Have and Not to Hold” NA — Production only