Say what you want about the good ol' days of MTV, old-timers, but Sunday night's edition contained an incredible moment in response to the white supremacist-driven violence that occurred in Charlottesville just over two weeks ago.

A descendant of Robert E. Lee, now a clergymember, spoke out against Lee's status as a symbol of white supremacy, and Heyer's mom, Susan Bro, announced a foundation in Heather's name to promote social justice. Watch ... 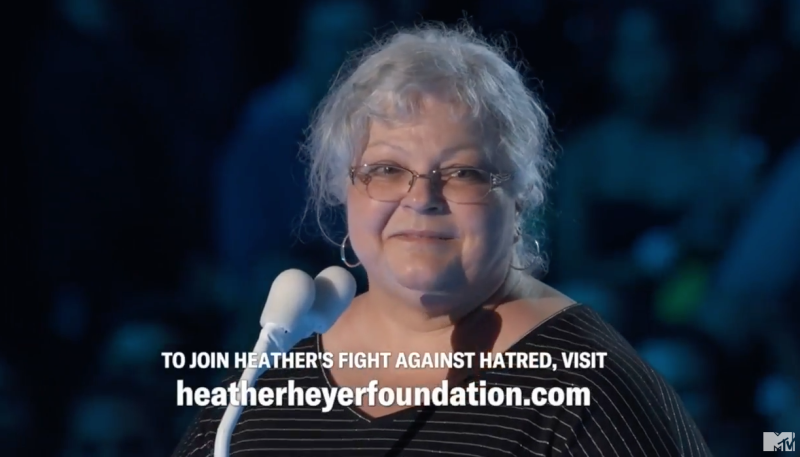 Robert Lee IV: "I call on all of us with privilege and power to confront racism and white supremacy head-on." (MTV) pic.twitter.com/xVy9iyoLeU

He said, in part:

I am a descendant of Robert E. Lee, the Civil War general whose statue was at the center of violence in Charlottesville. We have made my ancestor an idol of white supremacy, racism and hate. As a pastor, it is my moral duty to speak out against racism, American's original sin... I call on all of us with privilege and power to answer God's call to  confront racism and white supremacy head on.

He went on to say we could take inspiration from Black Lives Matter, the Women's March and Heyer, who was mowed down in Charlottesville, allegedly by a white supremacist.

Lee introduced Heather's mom, Susan Bro, who honored her daughter as well as all six (with no single winner) nominees in the newly created Best Fight Against the System category.

More importantly, she announced the launch of the Heather Heyer Founation. Watch:

The Heather Heyer Foundation was created to honor Heather Heyer, a young civil rights activist, who dedicated her life to promoting equal rights for all people. The Foundation has established a scholarship program to provide financial assistance to individuals passionate about positive social change. Scholarships will be awarded to those seeking a degree or certification in, but not limited to, law, paralegal studies, social work, social justice, and education.

A historic moment, to be sure.