Reality Whites: Should It Be A Surprise That 3 Out Of 7 RHONY Cast Members (Probably) Voted For Trump? Comments (0)

On this past week's Real Housewives of New York City reunion, a fan question led to the women carefully explaining their connections — real or imagined — to the 2016 presidential candidates.

Three of the women wouldn't say who they voted for, but only after talking about their close ties to the Trumps; one said she voted reluctantly for Hillary; two voted enthusiastically for Hillary; and the final woman, who is registered in Florida, didn't vote because, “It's not my thing” ... 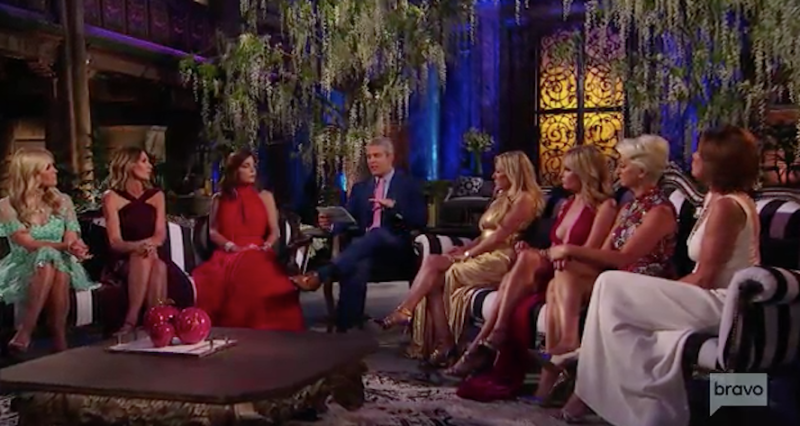 Which one of you bitches voted for that mother? (Image via Bravo)

Dorinda Medley, whose late husband was a big DNC booster, said she adores Hillary and would vote for her again.

Bethenny Frankel related an amusing story about bumping into Trump. Of Hillary, for whom she voted, she said she did not like her choices in the election and also griped that politics isn't a dialogue like it should be. HA! Bethenny Frankel is advocating for a dialogue? You could hang up during a phone call with her and she wouldn't realize for an hour.

Tinsley Mortimer, sounding like guillotine-bait, idiotically said she never got around to getting her ballot situation worked out since she was living in NYC but was allegedly registered in — where? — Florida. No biggie!

As for Ramona Singer, Sonja Morgan and Luann de Lesseps, all three talked up their ties to the Trumps before pleading the fifth.

At clip's end, Andy summarizes by saying he thinks it sounds like it was three for Hillary, three for Trump and one who abstained.

So even among liberal, female New Yorkers, Hillary could only count on three outta seven. BTW, a majority of white people has not voted for the Democratic candidate for president since before the Civil Rights Act:

How about we not invite Republican-voting reality stars to gay events anymore? They shouldn't be able to have it both ways.