I was very against Arnold Schwarzenegger when he ran for governor of California — and I think he sucked in that capacity. He certainly fumbled LGBTQ rights.

But his new rebuke of Trump over Trump's instantly infamous “both sides” comments is truly powerful. Schwarzenegger does not hold back here. You must watch ... 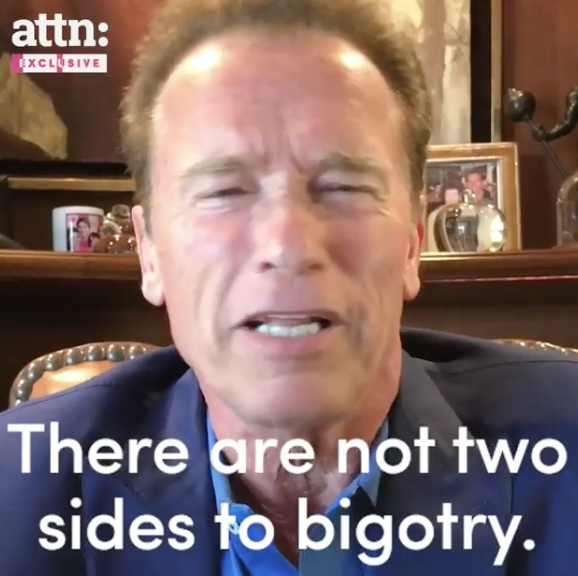 There are not two sides to bigotry. The only way to beat the loud and angry voices of hate is to meet them with louder, and more reasonable voices. That includes you, President Trump. You have a moral responsibility to send an unequivocal message that you won't stand for hate and racism.

I have a message to the neo-Nazis: Your heroes are losers. You are supporting a lost cause. Believe me — I knww the original Nazis. I was born in Austria in 1947 shortly after the Second World War. Growing up I was surrounded by broken men, men who came home from the war filled with shrapnels and guilt. Men who were misled into a losing ideology. And I can tell you that these ghosts that you idolize spent the rest of their lives living in shame ... and right now, they are resting in hell.

Let's all commit right now to leaving the terrible ghosts of the past in the trash heap of history.