Tina Fey Turns To Sheetcaking To Defeat The Nazis Comments (0)

Tina Fey brilliantly lampoons Trump's “both sides” B.S. with an ode to “sheetcaking,” which is going to set the Internet — and no crosses — ablaze.

Hilariously, early on, Tina says, “I've seen Raiders of the Lost Ark and I wasn't confused by it.” She also calls out “Yard-Sale Barbie,” Ann Coulter, and asks, “Who drove the car into the crowd? Hillary's emails?” 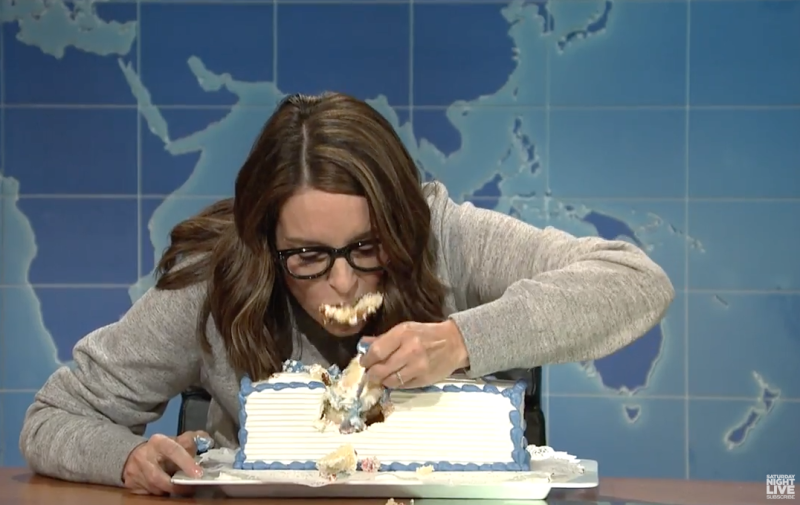 Tina is SNL's MVP of all time, rattling off jokes like this:

Part of me hopes these neo-Nazis do try it in New York City, like, I hope they try it and get the ham salad kicked out of them by a bunch of drag queens ... 'cause you know what a drag queen still is? A 6'4" black man.

Even more pointedly, while devouring her cake:

And then next time when you see a bunch of white boys, boys in polo shirts, screaming about taking our country back and you wanna scream, “It's not our country — we stole it from the Native Americans and when they have a peaceful protest at Standing Rock, we shoot at them with rubber bullets, but we let you chinless turds march through the streets with semi-automatic weapons.” And when you wanna yell that, don't yell it at the Klan, Colin, yet it into the cake.