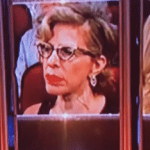 Because people started reacting to Jackie's reaction as if it may be real, she followed it up with even more outlandish tweets:

Laura Dern had famous parents. Forgive me for being from real people #elitism #Emmys2017

I hear that Laura Dern looted art from Nazi victims

I hear the media actually taking my reaction seriously? Are you kidding me?

Honestly, guys, it's not that hard to figure out. No wonder the Russians had no problem duping America with anti-Hillary and pro-Trump Facebook posts, and no wonder there are people who think all news is fake, including mass shootings.

I've been enjoying Jackie's work for 20 years in NYC, including this semi-recent one-woman performance.

P.S. For anyone at all skeptical of the idea that Jackie Hoffman was making jokes: