Do I Know You From Somewhere? — An Evening With Patrick Leonard, Madonna Maestro Comments (0) 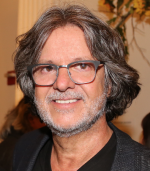 Tuesday night was the long-awaited An Evening with Patrick Leonard show at Joe's Pub in NYC, featuring prolific songsmith Patrick Leonard, the man behind some of Madonna's biggest hits and most soul-baring compositions.

He's 61 and a musical genius, but this marked his solo debut!

It was a nightmare for me professionally (to the extent that being a blogger is any kind of profession) due to a series of unfortunate photographic events not worth reliving, but I did get some stuff and the show itself was bliss, a total gift to fans of Leonard's immaculate work with Madonna. As generous as his 13-song set list was, he definitely left us wanting more. 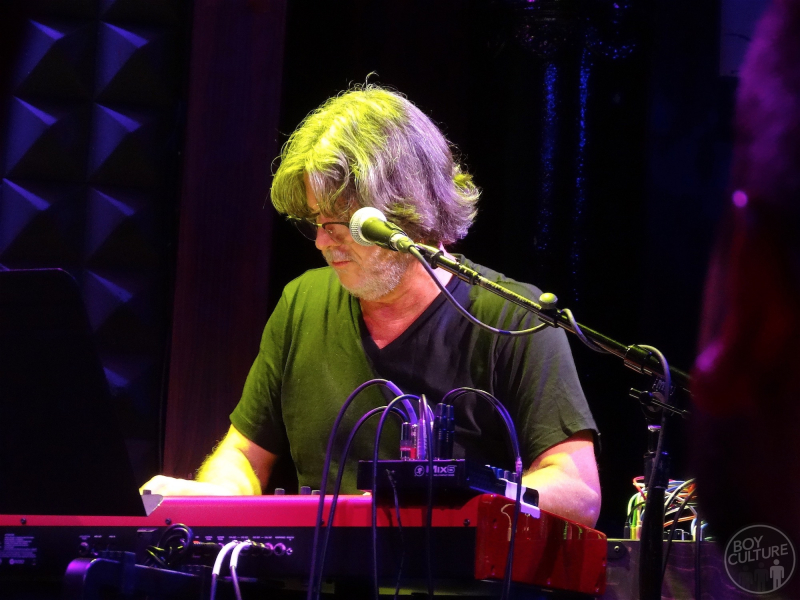 First of all, Leonard's event was a reunion of fans, and not only locals — I saw familiar faces from Chicago, from L.A. — and one fan apparently made the trek from Japan. 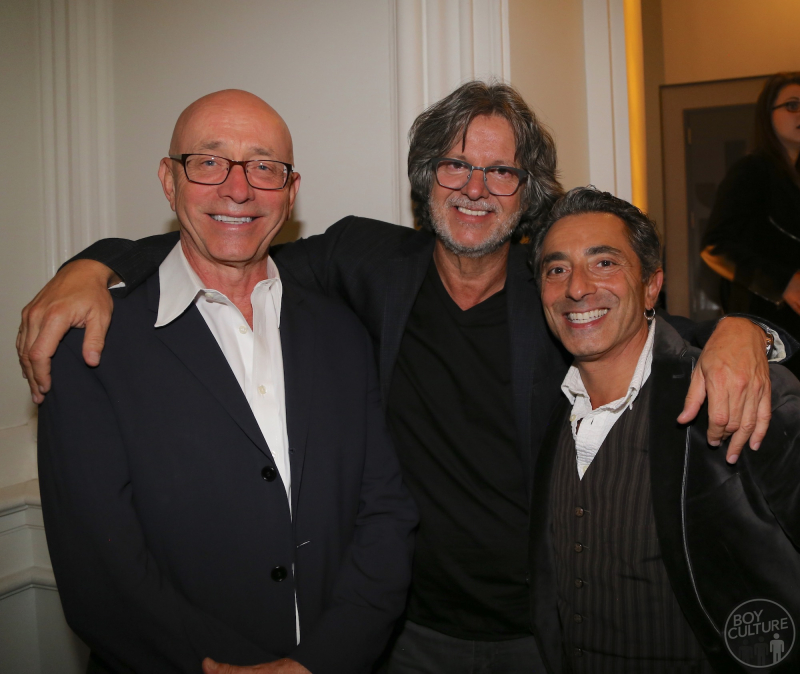 Put together by John D. Lee after he and Leonard met via Instagram, the all-instrumental show featured Leonard — accompanied by Bruce Gaitsch on the guitar and Doug Yowell on the drums — socking it to us with a set list that touched on all phases of his work with Madonna, skipping only their unreleased compositions for the aborted movie musical Hello, Suckers! (Rumor has it a demo from the project was played privately for some fans in the wee, small hours of the morning after the show.) 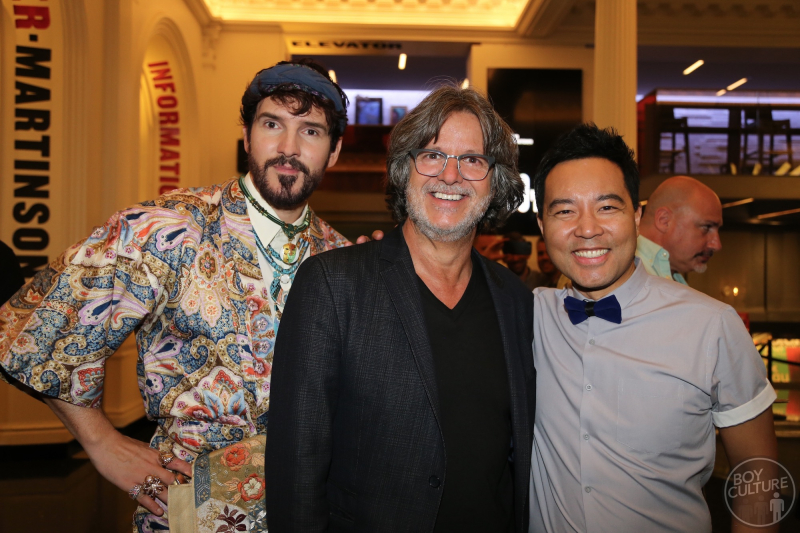 Leonard opened with “Live to Tell,” his first #1 with Madonna. The song felt opened up and less dramatic, more sweeping than the album version. He indicated he had orginally intended for the performance to incorporate some spacy sounds, but a malfunction ruled that out.

Next up, the band tore into “La Isla Bonita,” one of Leonard's hits with Madonna to which she has frequently returned over the years in various live settings. It was a special treat that Gaitsch, who co-wrote the song with Ciccone and Leonard, was on hand to bring it to life. Great arrangement with real verve. Watching Yowell's passion on the drums was contagious.

Leonard told the audience Madonna's nickname when they were working together in the '80s was Daisy (which, as we know, was a Great Gatsby reference), so his sheet music for the next number bore the scrawl “tango for Daiz” when he recently unearthed it: the criminally underexposed “Spanish Eyes” from Like a Prayer. The song was perfectly suited to the jazzy, improvisational setting. 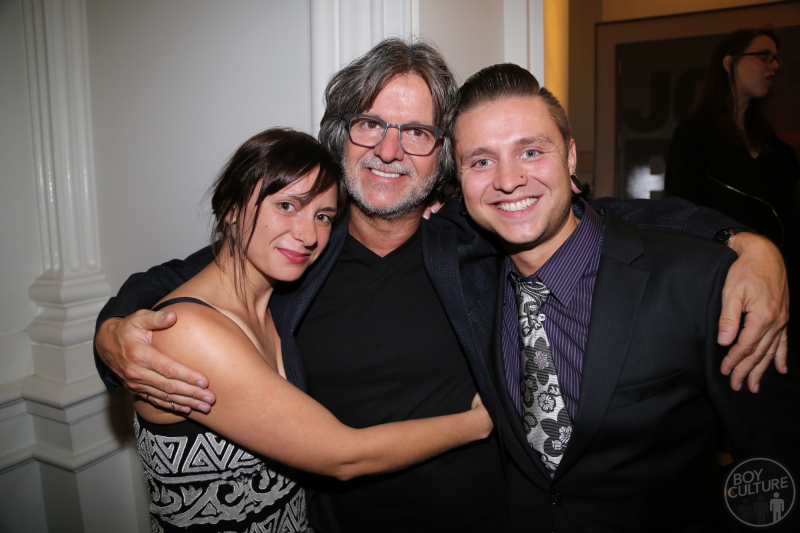 Leonard with his daughter Jessica (of “Dear Jessie”) and son Jordan. His kids are super down-to-earth and were blown away to see their dad perform — finally! 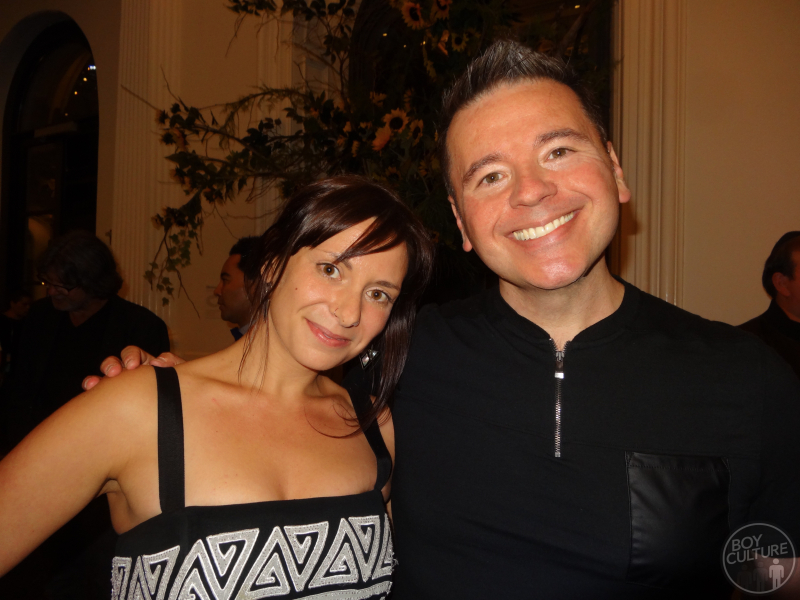 We discussed the pink elephant in the room — our adoration for her father's talent!

Next up was one of the highlights, a song the fans were jonesing for ever since hearing of this show: “Dear Jessie.” The Beatles-inspired tune from LAP was named, at Madonna's suggestion, for Leonard's daughter Jessica Leonard, now a screenwriter. Thrilling the audience, Jessie was in the crowd, along with one of Leonard's two sons, Jordan Leonard, a visual mapper. Jessie later spent time autographing foreign pressings of her namesake song, which was a Top 5 UK hit. She told me she'd never had so much attention in her life. Her dad's take on the song was faithful to the original. 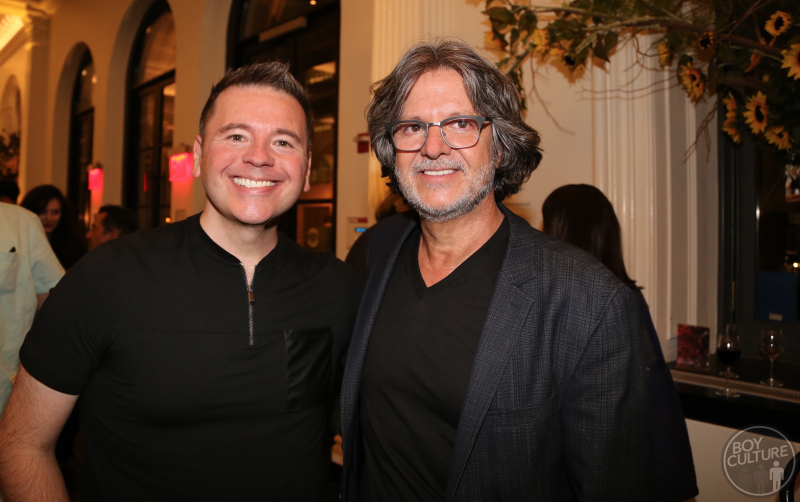 Some things really matter. As my friend Lav told me today, it was among our best musical experiences ever.

“Oh Father” appeared to be a highlight for Leonard, who remarked how much he liked the song after a particularly intense rendering that had the crowd deathly silent, drinking it in. It may not be a stretch to assume he considers it his best song with Madonna; it is certainly a song he has expressed pride in before, one he has said he's grateful lives on the evergreen Like a Prayer album so it can be discovered year after year by new fans. “Yeah, I love that song — love that song,” he said after it wrapped, then noted the complex, moody song (a #20 hit in 1989) had been sung by Madonna live in the studio.

My second favorite moment of the night was next: “He's a Man”! Leonard told the crowd I'm Breathless, the 1990 album on which it appears, was “done rapidly.”

The movie was done and Warner Bros. or some group decided that there should be a record, but there were only three sogs. They were Sondheim songs, so that's good, right? ... They asked if we would write songs inspired by, so we set about doing it and the whole thing was written and recorded in just a few weeks, but it's some of my favorite stuff we did ... and she did brilliantly.

As did he. Leonard had previously told me he had an affinity for the '30s sound due to his father being a jazz sax player, and that shone in the band's sizzling rendition of “He's a Man,” a slinky number with the va-va-voom confidence of Mae West that is vastly superior to his work with Madonna on “Hanky Panky,” a tune that was granted single status.

Part 1 of My Long Q&A with Patrick Leonard Here!

Most amazingly, since the (actually, now distracting and dated) walkie-talkie dialogue from Dick Tracy present on “He's a Man” was not available to Leonard, he substituted hysterical quotes from Hush... Hush, Sweet Charlotte (1964). I've always thought that any good Madonna song can be great with a sample of Bette Davis howling that Olivia de Havilland is a bitch.

Don't ever accuse Patrick Leonard of not knowing his audience, girl.

Part 2 of My Long Q&A with Patrick Leonard Here!

Leonard then took the evening back into introspective mode, offering the internal struggles of “Something to Remember” from I'm Breathless and the perfectly partnered “Promise to Try” from Like a Prayer. Both songs address an important figure in the singer's life — the first a true love that couldn't work, the second quite specifically Madonna's late mother. Absent lyrics and vocals, the music of each is so intelligently crafted it's hard to imagine them as anything other than what they are, laments sans artifice, sans shell.

Changing things up, the clear climax of the show arrived in the pairing of “The Look of Love” from the Who's That Girl soundtrack (1987) with “Skin” from Ray of Light (1998). It would be hard to find two more dissimilar songs to marry, but “The Look of Love” provided a wonderful transition from the heartbreak city of “STR” and “PTT,” while a plucky new arrangement made it sonically right for its positioning flat up against “Skin.” 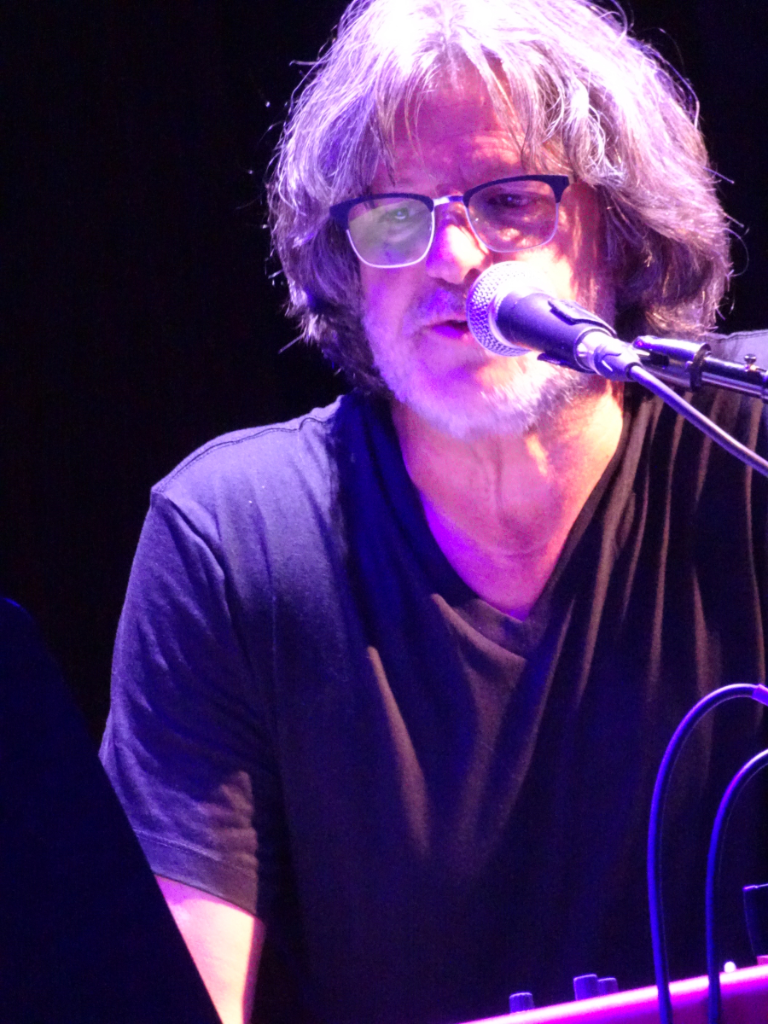 At a bar after the show, Leonard regaled fans with stories about the music. (Image by Mark Doctrow)

The opening of “The Look of Love” was accomplished with a modular synthesizer, teasing out a Euro techno sound absent from the original version, which hit #9 in the UK. This reinvention was a taste of what was to come, a throbbing “Skin” that brought all the slay the room could handle. Magnificent. It was during this performance that I kept thinking, from my perspective, how incredible it would have been to see Madonna emerge from behind the band, walk up to a mic with lyric sheets and just improvise as if she were back in 1998, creating the song, recreating it vocally as Leonard did sonically in 2017.

“Frozen” represents Leonard's second-to-last single with Madonna (the absent “Nothing Really Matters” being their so-far-final single together). Leonard transformed it via modular synth, creating a powerful and nearly out of control percussive sample. It was like the dissonance created in jazz, this odd, mod bassline doing battle with “Frozen's” familiar, serene melody. Man, did it work. It is ready, as is, to be the next version Madonna performs of this gem on tour. 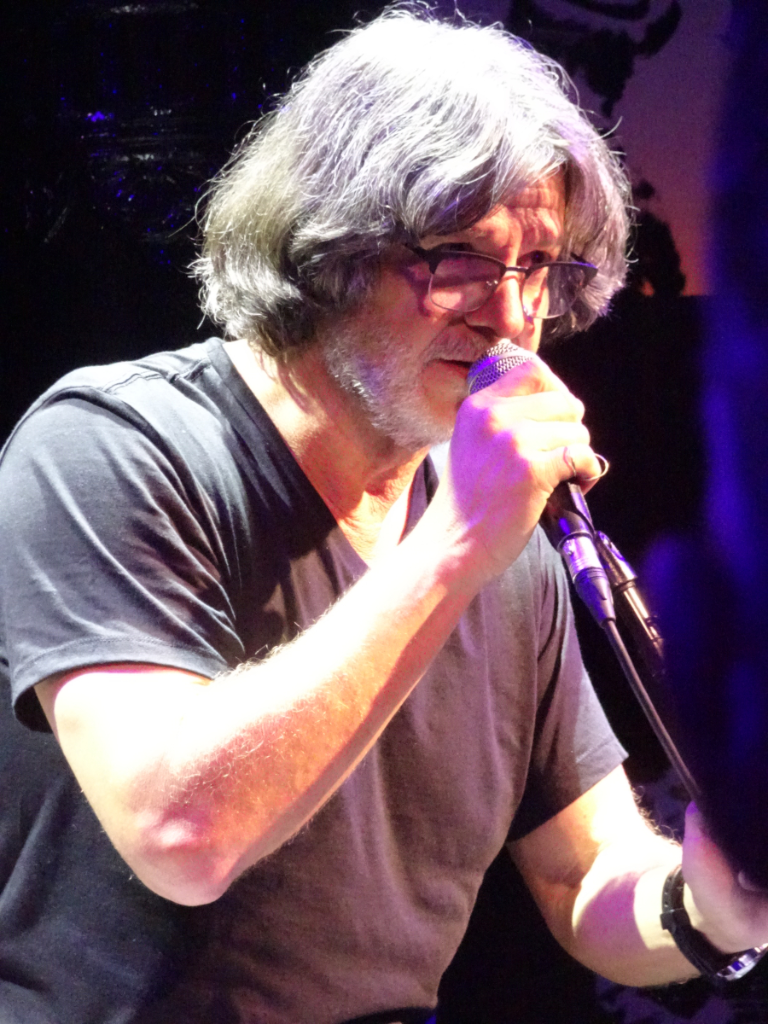 Anyone who thinks Madonna is a musical poser should listen to Patrick Leonard speak about their collaborative process. (Image by Mark Doctrow)

Probably my least favorite take of the night was Leonard's adventurous recasting of the lesser ditty “Love Makes the World Go Round.” It is not one of their best, but it was their absolute first, so for that reason alone it deserved its day in the sun. It was so changed many ardent fans didn't seem to recognize it. Despite it being my least favorite (hey, something's gotta be your #13 favorite out of 13), I think it was superior to the original, and was happy to have it.

Finally, Leonard ended our visit to church with an achingly simple “Like a Prayer.” Like Marlene Dietrich offering “Falling in Love Again” as “the last one and the inevitable one” during her cabaret act, there was never any question that “LAP” would end the evening. What was surpising was the song's unassuming presentation, which encouraged fans to sing along — including the gospel riffs and ad-libs. So uplifting and joyful! These crazy bitches have some good voices on them. 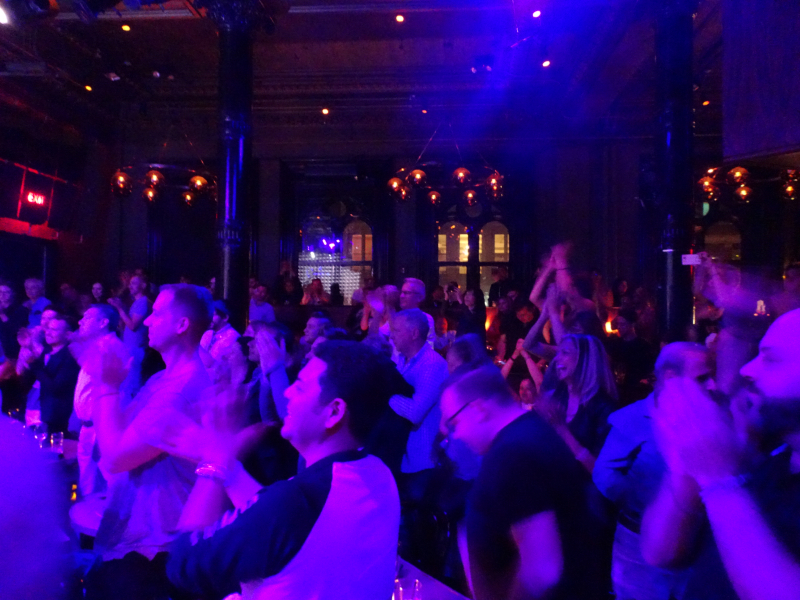 After the show, Leonard graciously stayed to meet everyone in the lobby, pose for pics and sign anything put before him. He was completely accommodating, ending up so frazzled I hope it won't discourage him from doing this again and again. Lee told me to expect Leonard to do many, many more shows, with L.A. next on the list.

Even if you watch all the videos from this performance online, I would like to point out that Leonard not only has the option of changing up his new arrangements and/or adding vocals (Madonna?), he also has quite a few songs he skipped this time: “Where's the Party,” “White Heat,” “Who's That Girl” (we did get a tiny nod to this), “Cherish,” “Till Death Do Us Part,” “Act of Contrition,” “Supernatural,” “Hanky Panky,” “Cry Baby,” “Now I'm Following You” (both of 'em), “I'll Remember,” “Nothing Really Matters,” “Has to Be,” “Sky Fits Heaven” and the unreleased “Angels with Dirty Faces.”

Song #7: “Something to Remember” (including sample from Song #6):