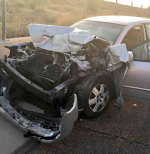 He's virulently anti-Obamacare and anti-single payer. He has tweeted about being young and healthy, so why should he pay for all the sick and dying?

Now, he's the one who's in one of those camps — and he wants his fans to bail his ass out. Kinda like a handout ... 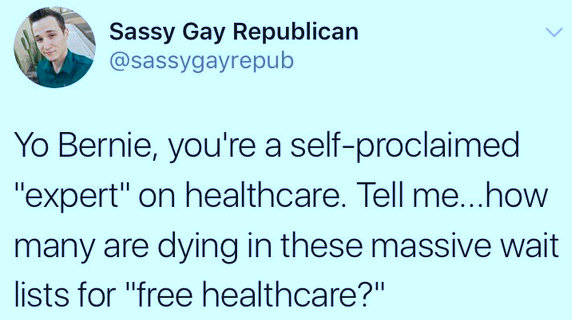 Joe.My.God.: Sassy Gay Republican is a pizza delivery driver who has mocked universal health care, his reasoning being that if he doesn't need it, why should he chip in to the kitty? Well, in his description of the catastrophic car accident he got into while delivering pizzas — an incident we know zero about except what he reports — he claims that in spite of his past substance abuse, he was sober and wasn't texting. Great! But from his GoFundMe (seriously!), it seems reasonable to assume he was at fault, and that other cars and people were banged up. Now he expects people to give him money directly out of their pockets because he's hard up. And you know what? A bunch of his donations are coming from liberals stating they don't want to take pleasure in his misfortune. This is why liberals are losing so much ground — too often, we extend a helping hand to our enemies instead of crushing them, or at least instead of allowing them to crush themselves.

This is for the crazy influx of haters after a few of my posts went viral. https://t.co/myTiNF2FTN

The Ellen Show: Ellen DeGeneres explains to Megyn Kelly why she would never give Trump a platform by having him on her show: “He is who he is and he has enough attention ...  I cna't have someone that I feel is, is not only dangerous, for the country and for me personally as a gay woman, but to the world. He is dividing all of us.” Man, Megyn Kelly comes off as a supercilious empty pantsuit in this exchange, especially when after Ellen's very personal comments she comes back with a soundbite about her plans for her vapid show:

Towleroad: A judge has ruled against a pair of Minnesota videographers who want to shoot only opposite-sex marriages.

DListed: Rich Republican Melissa Joan Hart took to Instagram to whine that her family vacay to Puerto Rico had to be called off. Bummer for her!!!

Joe.My.God.: Ann Coulter openly floats the idea of death squads for people who are not anti-immgrant, including Donald Trump — she now prefers Pence since he is attractive and less of a buffoon.

OMG Blog: Marilyn Manson let Howard Stern read Justin Bieber's apology texts on the radio. I think Bieber's a douchebag, but Manson sounds like every bit as much as a tool in this exchange.