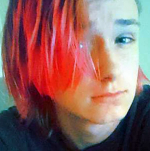 Ally Steinfeld came out as trans this year, saying she was “proud to be me.”

Months later, she was brutally murdered in what is being described as a plot by a group of teens who stabbed her in her genitals.

Why isn't her murder being investigated as a hate crime? The answer is all kinds of “white lives matter” ...

Via The Daily Beast: Ally Steinfeld, a recently out trans girl who used to go by the name Joey, was brutally murdered, her genitals stabbed and eyes gouged out, dismembered and burned, her body stuffed into a bag found in a chicken coop.

The intensity of the crime, as well as the victim's gender identity, would seem to make it an obvious hate crime, but the prosecutor in Missouri pooh-poohs the possibility:

“I would say murder in the first-degree is all that matters,” prosecutor Parke Stevens Jr. said told the Associated Press. “That is a hate crime in itself.”

In this case, three of Steinfeld's roommates in a trailer are charged with her premeditated murder. An outside friend is charged with abandonment of a corpse. She had been dating one of them, but an argument led to bad blodo, after which time one of the friends is alleged to have told people he had to kill her. It is even alleged that he tried first to poison Ally, stabbing her to death when she wouldn't drink the poison.

He later  bragged of the killing, and those in trouble for the crime apparently communicated, in a damning way, via social media about their plan and how to keep the murder quiet.

As The Daily Beast poins out, Ally is the 21st trans person murdered in the U.S. just this year.