I saw the elaborate trailer for Jigsaw, the latest (last?) installment in the Saw series of films (never watched any of them), but I was surprised to read the film's marketing campaign consists, in part, of images protesting the fact that gay men still face hurdles when it comes to donating blood in America. 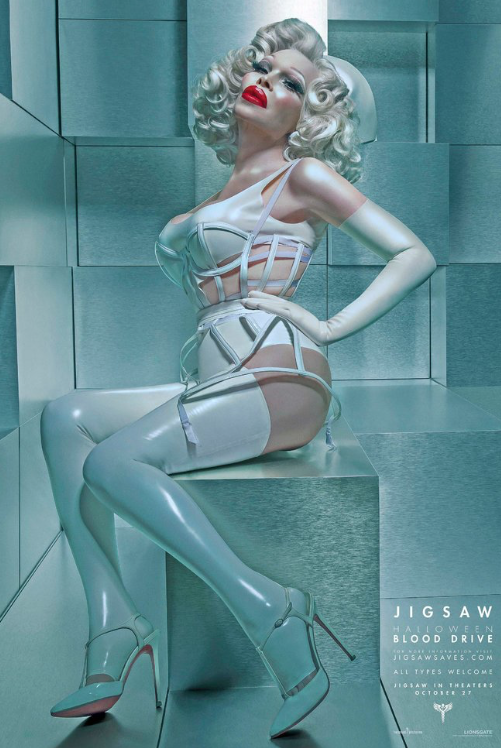 The Saw films have, since 2004, run blood drives — enough so that the American Red Cross honored their creator.

Now, Lionsgate, the studio releasing Jigsaw October 27, has rolled out a series of ads decrying the fact that men who have had sex with men can't donate blood unless they've been celibate for a year.

From The New York Times:

... Mr. Palen is now taking a more antagonistic approach. “All Types Welcome” is a condemnation of blood donation rules set by the Food and Drug Administration that prohibit most gay or bisexual men from giving; before donating, they have to forgo same-sex sexual encounters for at least a year, a contentious precaution resulting from concerns about H.I.V.

Mark Burg, the producer who has helped steer the “Saw” franchise, was even more blunt. “We want this policy changed,” he said.

An F.D.A. spokeswoman, Lyndsay Meyer, noted that the celibacy rule, enacted in 2015, replaced a more restrictive policy. “While acknowledging at the time that the change to a 12-month deferral was less than hoped for by some, the F.D.A. considered this to be a first step,” Ms. Meyer said, adding that studies are underway to “help inform further changes to policy.”

More power to this buzzzz-worthy movie and move.