Tennis, Everyone!: BATTLE OF THE SEXES Is The Feel-Gay Movie Of 2017 Comments (0)

I went to a screening of Battle of the Sexes — the story of Billie Jean King's herstoric tennis match vs. Bobby Riggs — thinking it would probably be tons of fun since King herself was supposed to be in attendance.

Alas, King wasn't able to make it (though the directors and some co-stars came), but the film was more than enough on its own, a crowd-pleasing, spirited retelling of the story of how a clownish, faded tennis star and one of the greatest female athletes of all time used a ridiculous event to further their own agendas ... 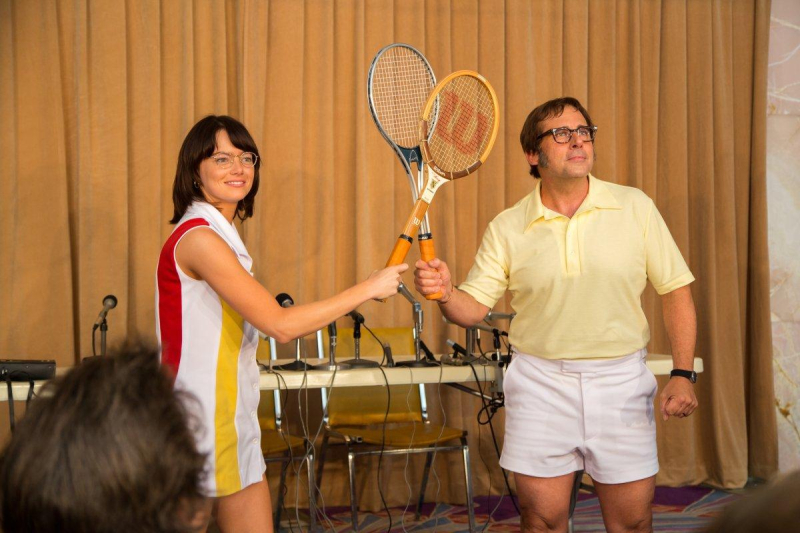 Stone & Carell make a racket together (Image via Fox Searchlight)

Battle of the Sexes, directed with verve, intellligence and great sensitivity by Little Miss Sunshine's Jonathan Dayton and Valerie Faris, follows Billie Jean King (an outstanding Emma Stone) as she navigates her newfound success, fighting for equal rights for women while secretly falling in love with Marilyn Barnett (Andrea Riseborough).

In the midst of it all is publicity-seeking Bobby Riggs (Steve Carell), a tennis ace past his prime who concocts a plan to play King as a final way of determining that men are superior athletes. It is an invitation straight shooter King finds repugnant ... until another woman loses to Riggs and the ante is upped for women everywhere.

The film is actually as much about King's struggle with exploring her sexuality outside her heterosexual marriage as it is about her unflappable efforts on behalf of women's rights while leading a female boycott of the U.S. Lawn Tennis Association in order to stick up for equal pay. As such, the chemistry between Stone and Riseborough (who you may recall from W.E. and Birdman, a movie in which she co-starred with Stone) is palpable, and Stone's performance perfectly captures King's personality — she portrays her as a determined but never nasty young woman who longs to do right by herself and by her fans.

This is not to mention the jaw-dropping specificity of Stone's Billie Jean King voice. She is not a dead ringer for King (though looks more than convincing enough), but is the best sound-alike imaginable.

Surprisingly, considering the ugly nature of King and Barnett's real-life breakup (Barnett, who became a paraplegic, sued King for palimony in 1981, outing her to the world), and considering Riggs' abrasive nature, Battle of the Sexes is a remarkably upbeat film, one that finds the positive aspects in most of of its characters, even the vile Jack Kramer (Bill Pullman), the tennis exec who deeply believes all the male chauvinist crapola Riggs seems to be shoveling just for the sake of showmanship.

Perhaps the only character with no redeeming qualities whatsoever is tennis great Margaret Court (Jessica McNamee), who in real life as well as in the film is staunchly anti-gay. Her disapproving presence is a shadow on King's effervescence and lust for life in the film, and in 2017, the right-wing Christianist has been a loud voice against same-sex marriage in her native Australia. She's one of the most winning female tennis players of all time, but a major loser.

Most interesting to me, Riggs is rendered by Carell as a very likeable goofball, but that interpretation jibes with the fact that King seems to have never taken him seriously, laughing along at his antifeminist cracks in archival video and remaining buddies with him until his death 20 years ago from cancer.

Silverman steals all her scenes. (Image via Fox Searchlight)

The supporting players? Love. Among them, Sarah Silverman is Oscar-nomination-worthy as Gladys Heldman, the brassy promoter who helped King and others do their own thing when the tennis honchos wanted to pay them one-eighth of what the male players were getting; Elisabeth Shue is pitch-perfect as Riggs' long-suffering, woman-behind-the-man wife; and adorable Austin Stowell captures King's husband Larry's progressive outlook and adoration for her. 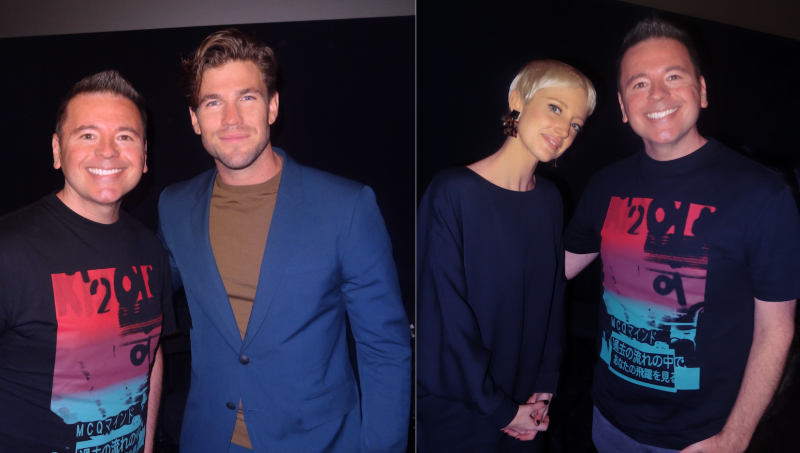 Me with Stowell & Riseborough, who was pleased her W.E. fans came out.

The match itself, held in the Astrodome, is recreated with so much attention to detail you'll swear you've just watched it in full. I complimented Faris on their choice of using actual footage of the late Howard Cosell's cringeworthy play-by-play — as easy as it would've been to hire just about anyone to imitate him, using the man himself lends a vérité element to the proceedings. Brill. Battle of the Sexes is one of the best Gay Pride films I've ever seen, but is also a deft snapshot of the battle for women's rights circa 1973 and of a world-famous event that may just have helped change the course of history.

Battle of the Sexes opens September 22.