Saying she's “just a little mayor from the capital city of San Juan,” Mayor Carmen Yulin Cruz has responded to Donald Trump's abhorrent trashing of her and of her agenda in seeking help for her homeland.

Her plea for help was proper and anything but nasty, and her response to Trump today is also classy and laser-focused on getting help ... 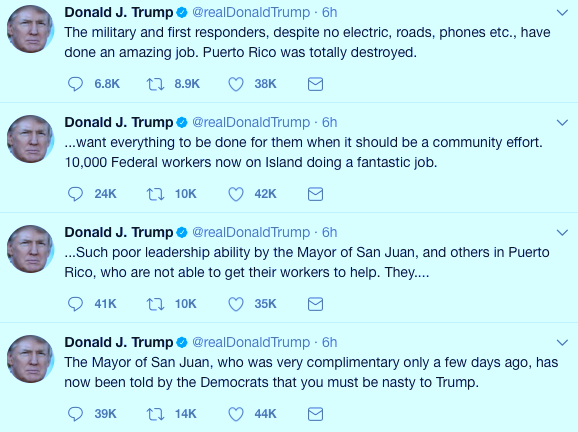 Trump said Puerto Ricans are lazy and that the San Juan mayor is nasty. (Image via Twitter)

Reminder: Mayor Cruz is wading through sewage helping with efforts to aid Puerto Ricans while Trump is literally tweeting in the wee small hours of the morning from the safety and comfort of a golf course. That's a fact.

While you tweet from your golf club, the Mayor of San Juan is saving lives. You've done NOTHING.

I'm with her. Again.

But also, I'm with Lin-Manuel Miranda:

You're going straight to hell, @realDonaldTrump.
No long lines for you.
Someone will say, "Right this way, sir."
They'll clear a path. https://t.co/xXfJH0KJmw