In What the Flip?, Grindr's new Web series, a white dude and an Asian dude swap Grindr profiles to see how what it feels like, girl.

The results are disturbing, with the white guy (posing as Asian) being largely ignored and even called a racial slur. The Asian guy posing as white can't keep up with the interest he's receiving.

The series debut pulls punches with a sort of nicey-nice ending, but it's definitely pretty interesting. Keep reading for that, Trump's latest violent overture regarding Hillary, Madonna's new interview (and Nancy Sinatra's rave for her), tons of hot guys and more ...

The Asian participant admits it was nice getting so much newfound attention. (Image via Grindr)

Grindr: When does a preference turn into discrimination? One point made that isn't usually made when we talk about if it's okay to say NO ASIANS, NO BLACKS, NO WHITES, etc., is that sometimes, guys might have that preference just for one hookup. I don't think that takes away the sting of what is pretty clearly racist (I mean, if you're rejecting all black people, that's a gigantic array of people, not a type), but it does, perhaps, mean the person looking isn't exactly ready to march in Charlottesville.

CBS News: Madonna wants to reinvent pop tours, hinting at a residency somewhere. Meanwhile, she was on CBS Sunday Morning talking up her work with her foundation Raising Malawi, which — haters be damned — is finally bearing fruit. Madonna's not the only one who's a fan of what Madonna's doing; None other than Nancy Sinatra raved about her on Twitter, calling her a hero for her good deeds. Sinatra wrote: “Madonna is my hero. She is following in my dad's footsteps making big changes in the suffering world. Thank you @madonna.”

Kenneth in the (212): Nothing like a ripped, handsome dude packed into a tiny Speedo. Board shorts be damned. Also, nice: A sexy AF actor getting a BJ at bath time, rendered in GIF form. God's GIF form, I'd say. (Work Unfriendly) Also nice: A rugged, hairy-chested ginger. 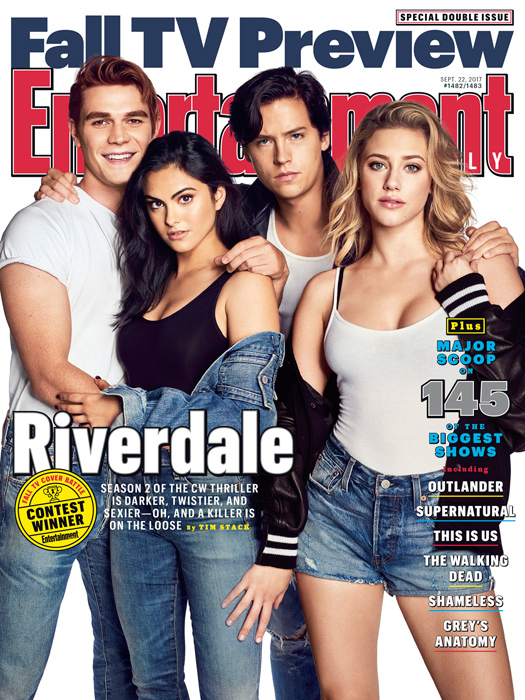 Entertainment Weekly: The cast of Riverdale puts on their straight faces while telling you how to deal with relationships:

... Tennant had turned to the Princess at a picnic on the beach and said: “Would you mind awfully, Ma’am, if I were to remove my swimming trunks?”

The pictures found their way into the newspapers — which gave Margaret’s husband a golden opportunity to portray himself as the wronged party. He declared he felt humiliated, that his position was “quite intolerable,” and that a separation was the only solution.