Kevin Spacey Had A Secret: Anthony Rapp Accuses The Oscar Winner Of Trying To Seduce Him At 14 Comments (0) Anthony Rapp, in an emotional story for BuzzFeed, has alleged that Kevin Spacey attempted to have sex with him when Spacey was 26 and Rapp just 14, and both were first achieving success on Broadway.

Spacey's response after the jump ... 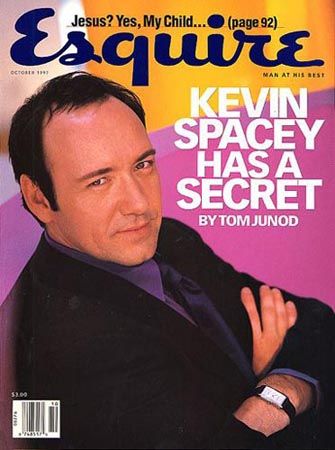 “My memory was that I thought, Oh, everybody's gone. Well, yeah, I should probably go home,” Rapp said. Spacey, he recalled, “sort of stood in the doorway, kind of swaying. My impression when he came in the room was that he was drunk.” Rapp doesn't remember Spacey saying anything to him. Instead, Rapp said, “He picked me up like a groom picks up the bride over the threshold. But I don't, like, squirm away initially, because I'm like, 'What's going on?' And then he lays down on top of me.”

“He was trying to seduce me,” Rapp said. “I don't know if I would have used that language. But I was aware that he was trying to get with me sexually.”

Rapp recalled this all happening — Spacey appearing at the door, coming into the room, picking him up, and putting him on the bed — in one clumsy action, with Spacey landing at a slight angle on top of him. He said Spacey “was, like, pressing into me,” and that he remembers Spacey “tightening his arms.” But while he can't recall exactly how long Spacey remained on top of him, Rapp said he was able to “squirm” away after a short period.

“It was a frozen moment. In terms of fight or flight or freeze, I tend to freeze.”

“It was a frozen moment,” Rapp said of the entire encounter, with a deep, exasperated sigh. “In terms of fight or flight or freeze, I tend to freeze.”

After pushing Spacey off him, Rapp remembered he was able to step into the bathroom and close the door. "I was like, 'What is happening?'” he said. “I saw on the counter next to the sink a picture of him having his arm around a man. So I think on some level I was like, Oh. He's gay. I guess.Then I opened the door, and I was like, 'OK, I'm going to go home now.' He followed me to the front door of the apartment, and as I opened the door to leave, he was leaning on the front door[frame]. And he was like, 'Are you sure you wanna go?' I said, 'Yes, good night,' and then I did leave."

As he walked home, “My head was spinning,” Rapp said. “I have a memory of turning around and [thinking], What was that? What am I supposed to do with it? What does it mean?”

Surprisingly, Spacey does not outright deny the accusation. Rather, he admits it could have happened the way Rapp relates it, chalks it up to drunkennes — and comes out of the closet after decades of remaining steadfastly private on the topic of his sexual orientation:

Crappy way to come out of the closet, no?