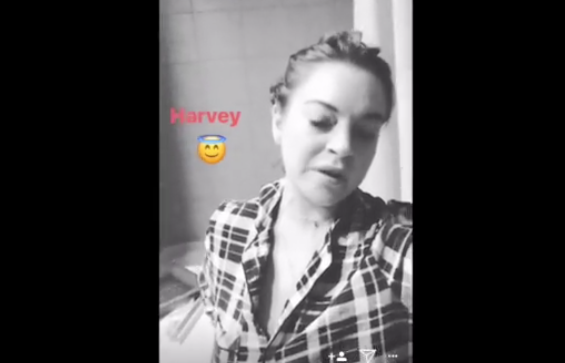 Lindsay Lohan may have mental or substance-abuse (or both) issues, but at what point do you stop cutting slack for that and realize you're not her family so it's okay to abandon her?

Maybe when she goes pro-Trump? Or how about now, as she defends Harvey Weinstein ...

Via Jezebel: Lohan, using her bizarre new accent, decided she needed to defend Harvey Weinstein, who has now been accused of sexual harassment, coercion and outright rape by a number of women. (He denies that anything was non-consensual.)

Hi, this is Lindsay Lohan, uh, hi, I'm in Dubai, I'm home. Uh, uh,  I feel very bad for Harvey Weinstein right now, I don't think it's right what's going on. I think Georgina needs to take a stand and be there for her husband. And he's never harmed me or did anything wrong to me. We've done several movies together, and so I think everyone needs to stop. I think it's wrong. So, stand up.

What exactly is she saying is wrong? Is she accusing the women of lying? So Angelina Jolie is a lying, trifling bitch, or?

Look, Lindsay Lohan is a person I met and worked with. She was beautiful and talented, but never nice. Her family is insane. Whatever has gotten her to this point, she is no longer beautiful or talented, and while I pity her obvious mental deficiency, when she is raving about Clarence Thomas and Neil Gorsuch and Donald Trump and now sucking up to Harvey Weinstein, I think she has to be seen as a villain and scorned.

You can still like Mean Girls, but you're a prick like her if you're still loving Linz, even ironically.