During an appearance on The View, Sen. John McCain (R-Arizona) laughed heartily when asked if he was scared of Trump now that he has gone after him.

Keep reading for the amusing response ... 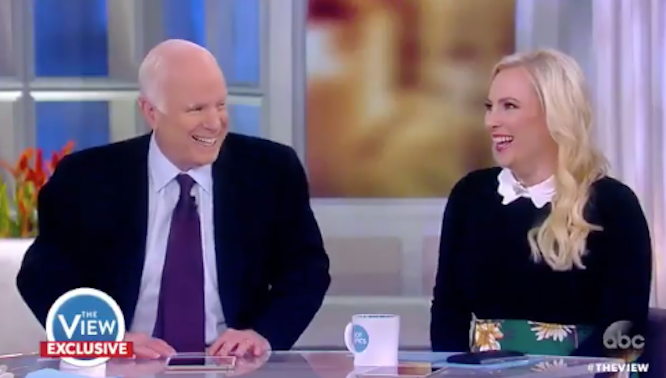 John McCain has not always had a welcome reception at The View, but his daughter Meghan joining as the show's lone conservative voice — and the extraordinary unpreparedness of common foe Donald Trump — seems to have changed that.

In a jovial appearance this morning, Sen. McCain LOLed when asked if he feared retaliation from Trump over their political feud:

McCain is asked if he's afraid of Trump. He laughs for about 15 straight second. pic.twitter.com/u7NYkkBGHf

McCain also said he deplores the fight over Trump's gross call to the fallen soldier's wife:

McCain: "We should not be fighting about a brave American who lost his life serving his country." pic.twitter.com/2lLz6jHrny

Finally, check out McCain going out of his way to bring up the Obama conspiracy theories, yet another Trump dig:

McCain on people questioning Obama's religion, birthplace: "You can't let that go. You just got to do what's right." pic.twitter.com/98OylIWG3W