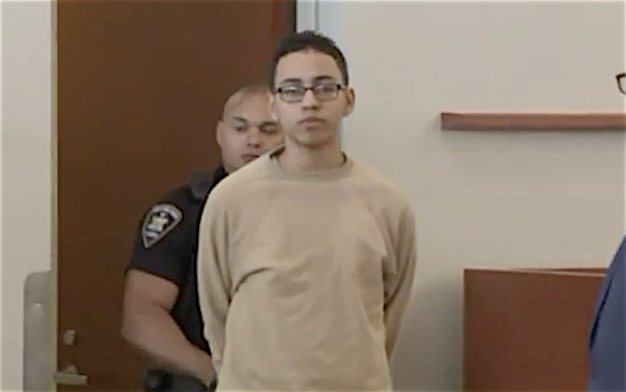 A young man accused of killing one classmate and injuring another over alleged homophobic bullying, is home with his family for the holidays ...

Cedeño, who is openly gay, has said he lashed out at the boys after they had bullied and beaten him for being gay.

At his hearing, which had been set up to specifically consider his bail amount, Cedeño had hoped to have his $500,000 bail slashed to $250,000. Bronx Supreme Court Justice William Mogulescu ultimately agreed, having been persuaded by the arguments of Cedeño's attorney, gay rights activist Christopher Lynn.

"Did you see all the news reports about not protecting gay kids at that school?" Lynn asked the prosecutor as he appealed to the judge. "Never done it," Lynn exclaimed.

"They never protected him," Lynn went on, describing administrators at the school, the Urban Assembly School for Wildlife Conservation. Cedeño had gone "to the guidance counselor," Lynn argued. "The counselor said, 'Be a man.'"

Cedeño, who is openly gay, was also apparently considering gender transitioning at the time of the stabbings.

Cedeño issued a statement following his release that thanked his supporters, including “the many gay men who generously donated.”