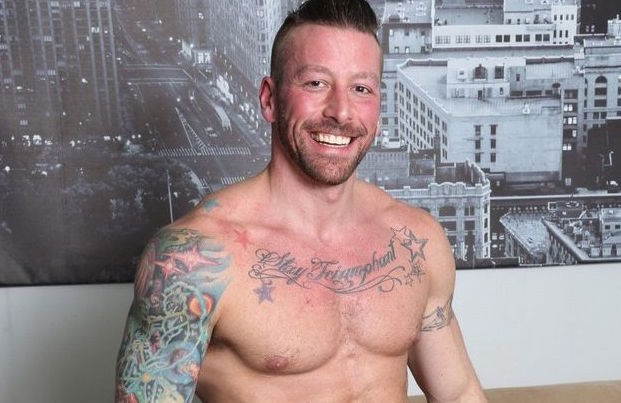 Hugh Hunter, a gay-porn star who has turned down his GayVN noms due to allegations of racism in the process.

Attitude: A white gay-porn actor, Hugh Hunter, has declined his nominations for the new GayVN Awards due to a lack of diversity among the nominees — and a ridiculously dated “Ethnic” category.

The @gayvn awards announce nominations including a BEST ETHNIC SCENE category for black, Latin, and Asian models. Meanwhile none are nominated as best actor or supporting actor.

My response, “...I am respectfully declining my nominations in all categories...”

The Guardian: Susan Sarandon tells The Guardian she's not so bothered by sexual harassment in Hollywood — and that if Hillary had won, the U.S. would be at war (presumably with ... Iran?). She's so far gone it's going to be hard to care when she stops acting, to be honest. Anyone who seriously thinks we're better off with Trump — health care, Roy Moore, the vacant State Dept., the war on science, the embrace of white supremacy, the links to Russia be damned — is a goddamned idiot.

ExtraTV: Prince Harry is even further away from ever settling down with the likes of you.

New York: Trump is now suggesting privately that the Access Hollywood tape was fake. As usual, he says what he is when attacking people or things he despises.

And I am sick that people like Leeanne Tweeden feel comfortable enough to take the traumas of the women and children that have been the true victims of sexual violence and used them for her own personal gains and the political goals of the Republican Party. Leeanne Tweeden is the woman that recently accused Al Franken of sexually violating her at a rehearsal for a USO comedy show in 2006. Her decision to take her story public after 10 years of “silence” has been framed by both the left and the right as a survivor’s act of bravery that demands immediate attention and strict consequences. I see Leeanne Tweeden’s actions quite differently.