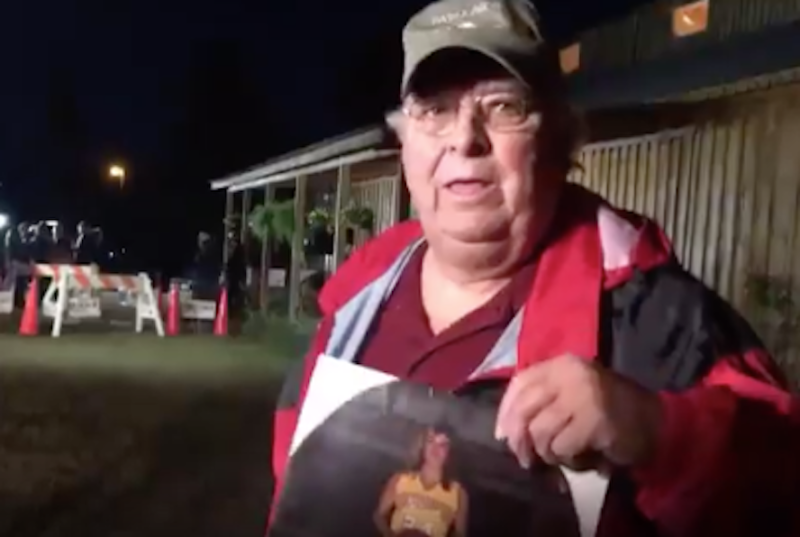 This brave man, who admits he said anti-gay things to his lesbian daughter — who later killed herself —protested Roy Moore the night before the Senate election in Alabama.

I don't know what I'll accomplish — I really don't. I had mixed emotions about comin', but somebody needs to speak up. And if it's all to no avail, so be it. It won't be the first time I've done somethin' to no avail, okay? But my sign there speaks for itself, and my sign is truth.

The man, a local peanut farmer, went on to say:

I was anti-gay myself. I said bad things to my daughter myself, which I regret, but I can't take back what happened to my daughter.

Father, who says he's a local peanut farmer in Wicksburg, outside Roy Moore rally talks about losing his gay daughter at age of 23 to suicide. "I was anti-gay myself. I said bad things to my daughter, which I regret." pic.twitter.com/J0oOU0EJI2

Now, take a look at a letter he wrote about his daughter back in 2012:

On March 22, 1995, Patti took her own life because she didn’t want to be gay anymore. She was tired of being ridiculed and made fun of. She was tired of seeing how a lot of people treat gay people. I found Patti that day.

Sometime after Patti died, I attended church and a visiting preacher was preaching. About 10 minutes into the sermon, he bashed gays the rest of the way. As soon as the invitation song was given, I went out the door with one of the worst headaches I had ever had. I was ashamed of myself for sitting there and not defending Patti. I have not been much since.

I have a hard time believing that God would allow Patti to be born as she was and if the doctors and psychiatrists were correct that “she could not help the way she was,” that Patti was going to bust hell wide open. I asked a local doctor recently if the medical profession had found a cure for being gay and he said, “No.” He changed the subject after that.

I have no quarrel with any letter writers or readers on this subject. Believe what you want to. I only know that if you ever have a child or grandchild who is gay, you’ll think differently.