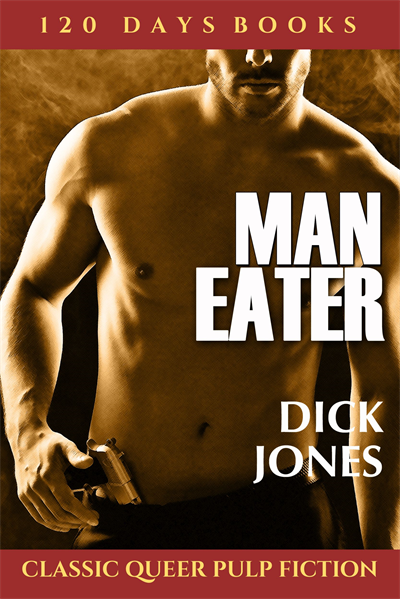 Riverdale's new 120 Days imprint is focusing on reprinting classic gay erotica, starting with Man Eater by (who else?) Dick Jones ...

The first book of the new imprint will be Man Eater, a '70s gay pulp classic that follows a Vietnam vet turned detective who makes it his personal mission to find the deadly serial killer of gay men.

120 Days is an imprint of Magnus Books/Riverdale Avenue Books dedicated to reprinting classic erotica, especially the LGBT titles of the 20th century.  These vintage gay erotic novels, many written by novelists unable to find other outlets for fiction about gay men and women, peaked between 1968 and 1982. As censorship laws were struck down across the US, the best of these writers continued to turn out well-plotted genre novels--spy thrillers, science-fiction tales, mysteries, swashbuckling adventures, gothic romances and even pre-“Brokeback Mountain” westerns--within whose conventions they were able to explore the full range of their characters' lives. Surprisingly modern with just a dash of retro appeal these largely-forgotten novels are both great, fun reads and a bracing reminder that times change but people don't.

“I was drawn to gay adult novels of the 1970s by their teasing covers, but stayed for the books between them. They contained a world of entertaining and often slyly subversive thrillers, horror stories, coming-of-age tales and more, filled with characters who bucked demeaning stereotypes and followed their own dreams and desires wherever they led," explained 120 Days Founder Maitland McDonagh   I'm excited that Riverdale Avenue Books is bringing this queer pulp fiction to a wider audience: They're dispatches from the front lines of how we got here from there, and too much fun to remain hidden.”

“We are thrilled to be able to bring these ‘lost’ stories to publication in the 21st century to an audience that might not be aware of their existence and place in LGBT and publishing history. Maitland has rediscovered some really unique and creative works, ”said Riverdale Avenue Books Publisher Lori Perkins.