Ever been seeing someone who disappeared without a trace?

If you've ever been ghosted — or, let's be honest, ghosted someone — the new Snapchat series Ghost Hunt is for you.

My chat with series host Matteo Lane, an accomplished gay stand-up comic, opera singer, podcaster and popular presence on Logo, lasted longer than some relationships these days, but we at least both knew when it was over ... 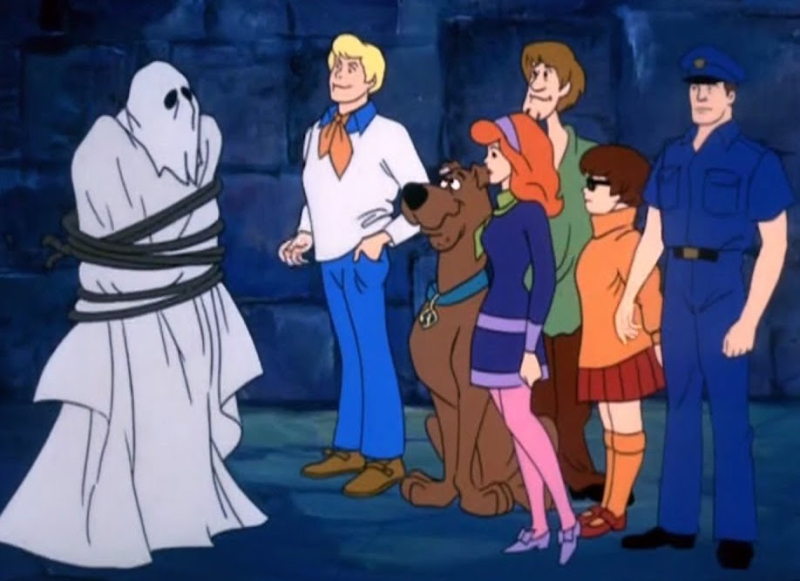 He'd have gotten away with it, too, if it weren't for that meddling Matteo Lane! (Image via Hanna-Barbera)

Matteo Lane: Apps are the new bars and ghosting is the new breakup call. I’ve been ghosted SO much. I’m currently being ghosted right now. And do I ghost? I may or may not have invented the term.

BC: What's the worst breakup you've had or have heard of?

ML: I’ve only had one boyfriend, and in true Italian fashion it ended dramatically and we haven’t spoken in seven years. I think I’d like to see how he’s doing, but I don’t know if we’ll ever speak again? Could I be ANY more dramatic? (The answer is yes.) BC: What's a first date going to be like with you?

ML: I do well with first dates. I know how to put on a show. It’s after that first date I crumble, ha ha. But I’m a conversationalist at heart and am curious about other people’s lives and backgrounds. I would want a quiet place that’s barely lit. I look best in a dark cave with a single candle.

BC: What kind of boyfriend are you?

ML: I think I’m like an Italian mom. I’m a caretaker, I’m sensitive, I will cook for you. Of course, I say this but in reality I’m horrified of commitment and get scared easily. I’m really like a Pokémon in the Safari Zone — easily scared off and hard to catch.

BC: One aspect of your brand is your body — does being ripped ever NOT come in handy when presenting yourself in a self-deprecating way as part of a stand-up set?

ML: I thought working out and changing my diet would give me more self-confidence. All it’s done is make me an insecure exhibitionist.

BC: You post lots of sexy selfies (I saw your body-transformation snap) — do you get unsolicited come-ons? Are they ever fruitful?

ML: I do want to say I post videos of me singing opera, whistle tones, my art work (I’m a classically trained oil painter and opera singer) but no one seems to notice. I have an entire comic book series I illustrated and Bob the Drag Queen wrote called kickass drag queen. It has its own Instagram!

But yes I get DM’s and nice messages. I just take it as a compliment.

He has possibly the best butt in history, sings beautifully and paints exquisitely. In that order. Follow. —Ed.

BC: Which famous guy would you most want to take to prom (this is a euphemism) if given the chance?

ML: Anyone who could make my hair look nice.

BC: Who are your comedy idols?

ML: Joan Rivers. Kathy Griffin and Ellen. They are legends and do NOT get the credit they deserve. Also my aunt Cindy. In my mind, she’s the comedian, not me.

BC: Which drag queen is your spirit animal?

ML: Bob the Drag Queen. I may just be saying that because he’s my best friend. But he’s the smartest person I know, and I love him.

BC: What's the funniest thing you heard all year?

BC: Should we ever forgive some of the people in comedy who've been accused of inappropriate behavior?

ML: You went from asking about sexy selfies to this?

Note to self: Gay Italian comics require more of a segue. — Ed.
BC: People are more PC than in the past, and being enlightened and respectful has its obvious merits, but does it ever mess with your head in comedy? Ever second-guess stuff, or can you think of a joke you told that did NOT go over well for that reason?

ML: Part of comedy is trying out material and seeing if it works. Which you can’t do alone, you HAVE to have an audience. I liken it to painting. In order to get a painting just right, you have to go through years of training, color theory, practice and failing. Lots and lots of failing. Eventually, you’ll make your masterpiece. Jokes are the same. We’re all developing our material and trying the best we can. We’ll fuck up a lot, but at the end of the day, it’s because we’re trying to make people laugh.

BC: What do you like about working with Logo and doing red carpet interviews/hosting?

ML: I’m not very good at it. I accidentally insulted Vanessa Williams, and since then they haven’t had me back. People like Joo and Ashley Graham were cool. But usually celebrities take themselves SO seriously it’s annoying. I like talking to drag queens ,though.

BC: What is the most obnoxious social media trend?