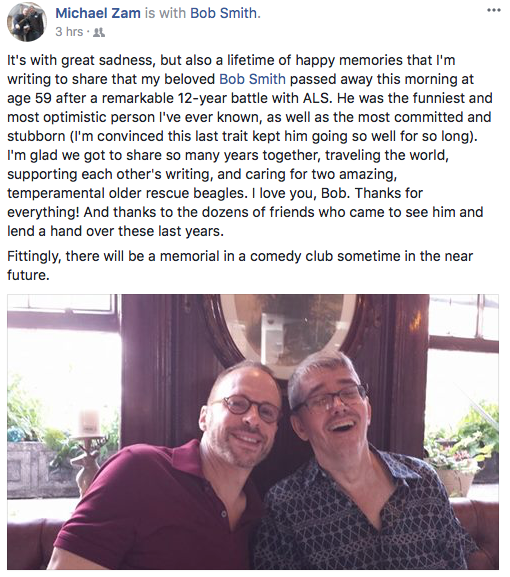 Bob Smith, the gay stand-up comic who blazed trails on the comedy circuit, on TV, and in print, has died at 59 following a battle with ALS, his partner Michael Zam confirmed on Facebook today ...

Smith was born in Buffalo, New York, on Christmas Eve 1960. He pursued his lifelong dream of being a stand-up comic at a time when many acts contained blatant fag and AIDS jokes, yet he persevered and thrived as an out gay man in the hostile profession.

For a 2016 interview, Smith related one of his stories about Joan Rivers, an early booster:

Joan was funny, funny, funny! I was inspired by her filing cabinets full of jokes. She was wonderfully supportive of young comedians. I was a guest on her television show in the '90s and she couldn't have been warmer and more gracious. It was still early in my career and I occasionally took catering gigs to supplement my stand-up income. About two months after I was on her show, I found myself working as a waiter at Joan's Christmas party. I didn't say anything to her--I wasn't certain she would remember me and I didn't want to make her feel awkward in her own home. When one of the other waiters pointed me out, she came over, took me by the hand and introduced me to her guests, telling them how funny I was.

Smith became the first openly gay comic on The Tonight Show and on other TV institutions, and also logged a first when he performed in his own half-hour HBO comedy special. From 1988 for ten years, he was part of the gay comedy trio Funny Gay Males, who also teamed up to write the book Growing Up Gay: From Left Out to Coming Out (1995). The troupe reunited for minitour in the early 2000s.

On The Late Late Show:

That experience led to Openly Bob, a Lambda-nominated humor book that merged his comedy with reflections of his life as a gay man. 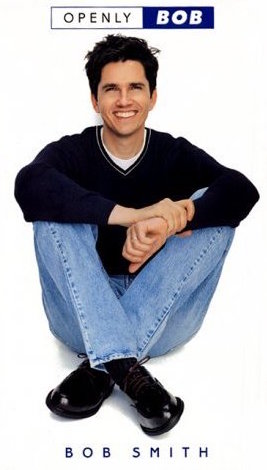 At the Inaugural We're Funny That Way Comedy Fest:

In 2007, Smith announced he had a neurological disorder so as to combat rumors about his slurred speech. In 2012, he announced he was actually battling ALS. A friend recalled he joked of the diagnosis, “Lou Gehrig's disease? I don't even like baseball!”

In a 2013 interview with Canada's Global News, Smith was remarkably optimistic about his lot in life:

I’m not in a wheelchair or dead. Most ALS patients die two to five years after diagnosis. I’m also not on anti-depressants ... Laughter is a good daily vitamin but love is the best medicine,” Smith. I feel loved by Michael, loved by family and friends — and even strangers who see me struggling to swipe my subway card and offer to help ... I’m optimistic that I’ll beat this.

He is survived by Zam, and by the children of fellow comic Elvira Kurt; he assisted in their conception.

Take a look a couple of sketches Smith wrote for MADtv: