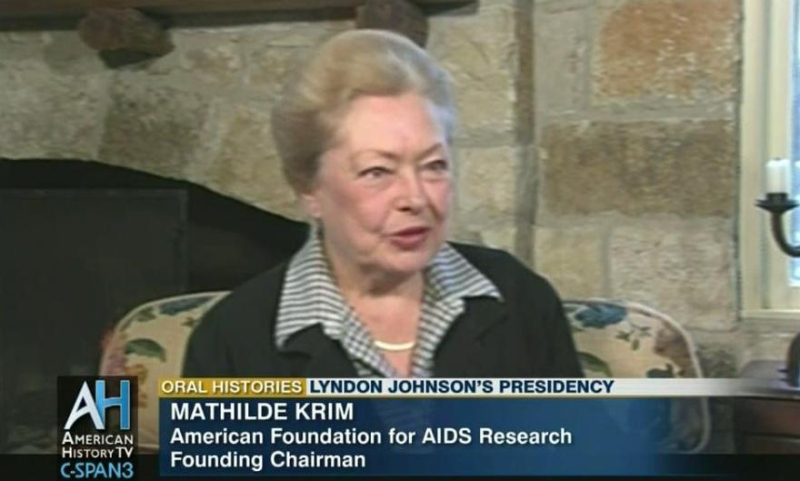 According to friends close to her, including Peter Staley and Andy Humm, Dr. Mathilde Krim, a seminal figure in the history of AIDS activism, has died. She was 91 ...

Europe-born Krim lived and worked in Israel in the '50s, helping to develop a way to determine a child's sex before birth, and studying viral causes of cancer, among other research.

This was at Dr. Krim's home! Imagine. So many points of history in her life. pic.twitter.com/Cd7OnqqTBi

Her second husband, from whom she took her professional name, was Arthur B. Krim (1910-1994), a longtime head of UA and the founder of Orion Pictures. Dr. Krim's husband was also a force to be reckoned with in the Democratic Party; he hosted the party for JFK's 45th on May 19, 1962, which was attended by many glitterati — including his lover, Marilyn Monroe. It was at the Krims' that the only picture of Monroe and Kennedy together was taken.

It was AIDS — a mixture of Dr. Krim's backgrounds in the sciences and in civil rights — that became Dr. Krim's calling. In 1981, Krim began to dedicate herself to AIDS awareness in order to frame the unfolding of what became a pandemic in such a way that average people would not use it to discriminate, and to help determine its causes and potential cures. She founded the AIDS Medical Foundation, which became a part of amfAR in 1983, an organization that has been at the forefront of combatting HIV/AIDS for 35 years now.

A recipient of the Presidential Medal of Freedom, she apparently passed away mid-day today, January 15, 2018. There are no other details of her passing at this time.