Get Ur FREAK SHOW On: Inside Trudie Styler's NYC Movie Premiere Comments (0) 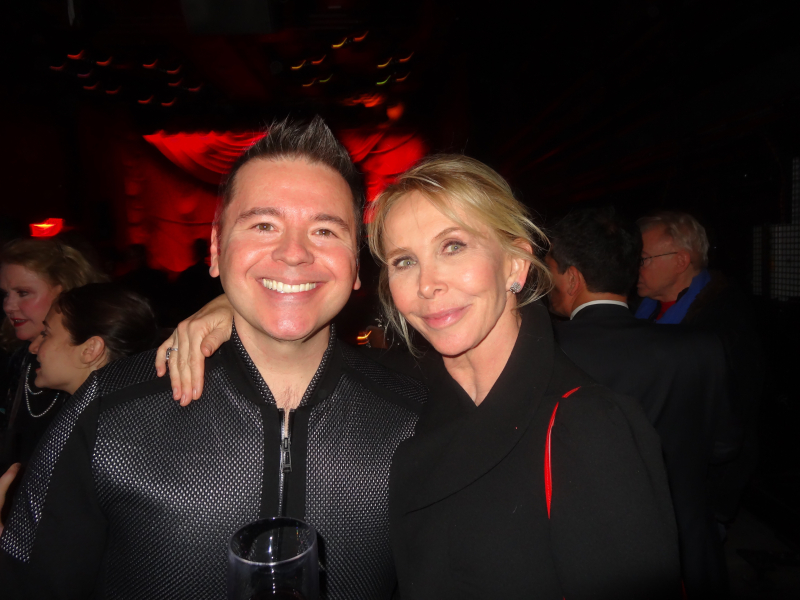 Ms. Styler could not have been more gracious to me, or to her guests (Party images by Matthew Rettenmund)

If you've never read Freak Show by James St. James — as I hadn't, until recently — do! It's a darkly funny coming-of-age story about a flamboyant kid attempting to adapt to his decidedly non-flamboyant surroundings, and it couldn't be more timely.

Now, Trudie Styler is making her directorial debut with a feature adapted from the novel, and I was lucky enough to be invited to the NYC premiere last night ... 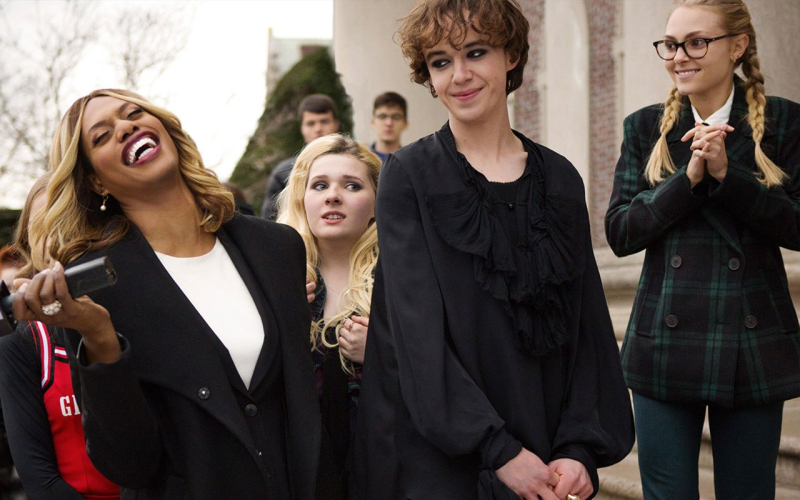 The screening was held at the Landmark Sunshine Cinema (143 E. Houston St.), a historic NYC venue that is set to close January 21, but that Styler announced was actually hosting its final screening of any kind in Freak Show. Bummer. End of an era.

Hopefully, Freak Show will be a beginning of a new era, one in which kids aren't bullied to the point where suicide seems an easy way out. 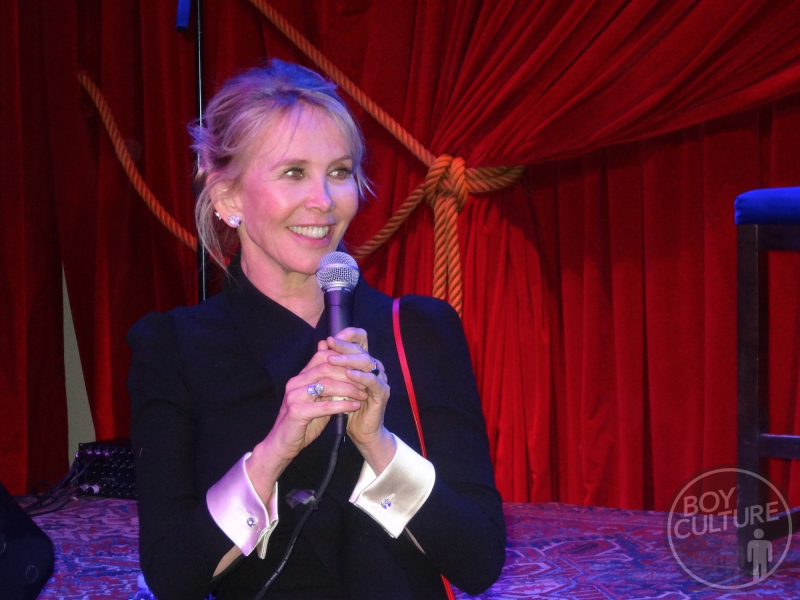 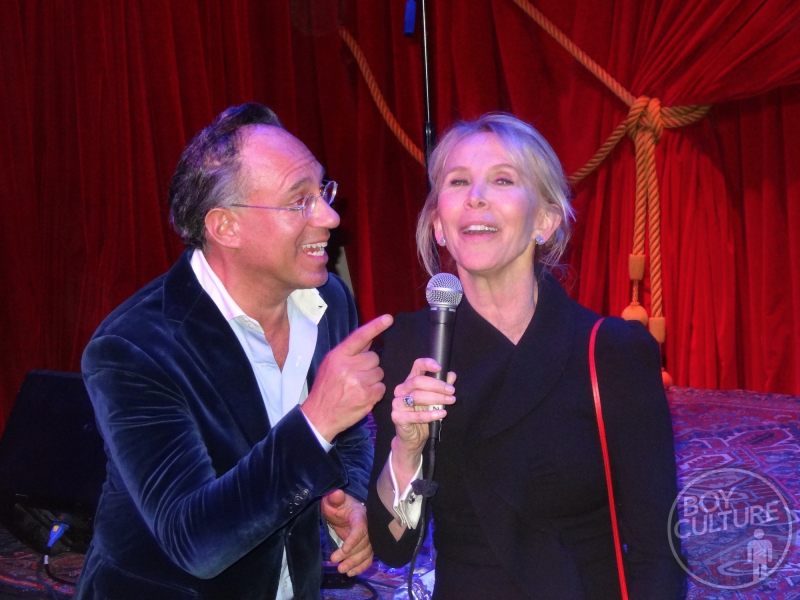 Styler introduced her film with obvious love for the principals and the subject matter, reserving her warmest praise for James, who was in the house. 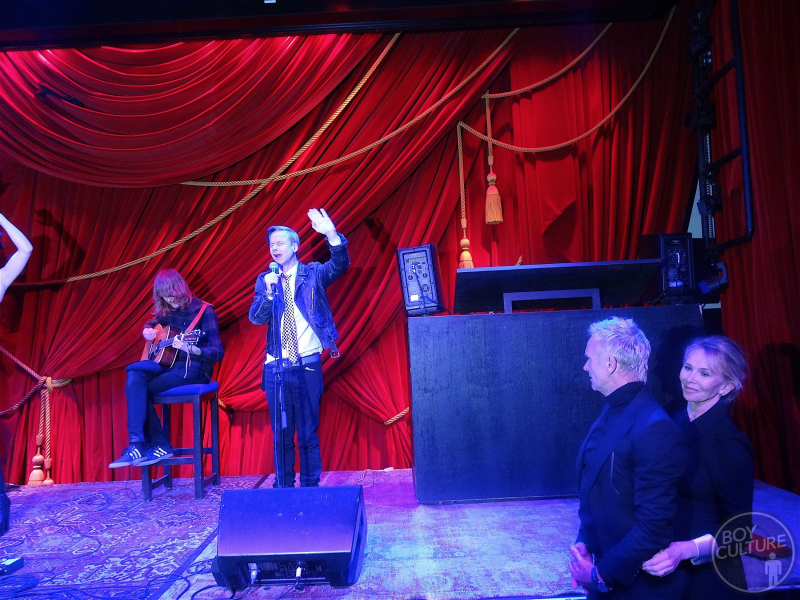 Sting & Trudie sat on the edge of the stage as John Cameron Mitchell and Lena Hall (not pictured) sang.

It was quite a starry house, by the way — I was standing with Hugh Jackman and Deborra-lee Furness Jackman as I entered; bumped into the gorgeous Nick Adams with Erich Bergen; sat with Denis Ferrara of New York Social Diary, Scott Gorenstein (who took most of my pic-withs) and Michael Musto (with whom I chatted about awards season); and also spotted/later saw had been there Patty Smyth and John McEnroe (I was dying to meet her, but I didn't see her at the after-party; he's in the film), Martha Stewart, Gina Gershon, AnnaSophia Robb, Dean Winters, Shaggy, Griffin Dunne (I had no idea he was there until today), Valerie Simpson, Alex & Keytt Lundqvist, Sandra Lee, Kim Petras, Padma Lakshmi, Donna Karan, Ian Nelson (in the film), Kelly Bensimon, Ricky Paul Goldin, Alysia Reiner (of Orange Is the New Black) & David Alan Basche, Lady Bunny, Amanda Lepore, John Cameron Mitchell & Lena Hall, Celia Weston (in the film), Arianna Huffington, Grace Hightower, Condola Rashad, Frederique van der Wal, Cory Michael Smith, Eliot Sumner, Christian Campbell, Dan Abrams, Tara Westwood, Jamie Cepero, Benjamin Thigpen, Cynthia Rowley, Ashley Haas, Patrick McMullan and a slew of NYC models and glitterati. 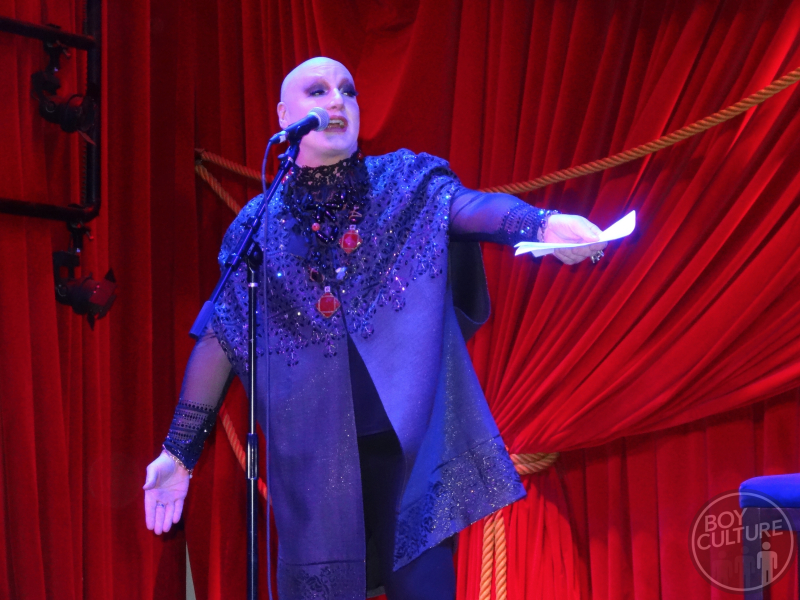 The film seemed to please the crowd — Alex Lawther (pictured) made a fine Billy Bloom,

our gender-nonconforming theyro, conveying youthful resolve as well as devastation when things go horribly awry. (And they do. Often.) I loved Celia Weston as the Blooms' housekeeper/caretaker/Annie from 1959's Imitation of Life. AnnaSophia Robb is pretty hard to dress down into a solid 7.5 shadow person — the kids in the school who go along with the bullies in public but who have been privately prepping for all-out war — and Abigail Breslin is perhaps playing down to her wannabe prom queen character, but I liked Ian Nelson as the romantic lead. He offered a nice blank quality common in boys that age, boys we all worship when we are that age, only to later look back and wonder why we were so smitten. He has real charm, and real heart is what helps the movie along, even through missteps (Bette Midler's small part was distracting).

I was also surprised at how fun John McEnroe is as a macho coach. Styler told us she'd had to arm-twist him into the role, but he was a grand slam.

The movie doesn't have the sickly-sweet ending we've come to expect, and that is also a plus, and a nod to reality and to looking for victories where they are. 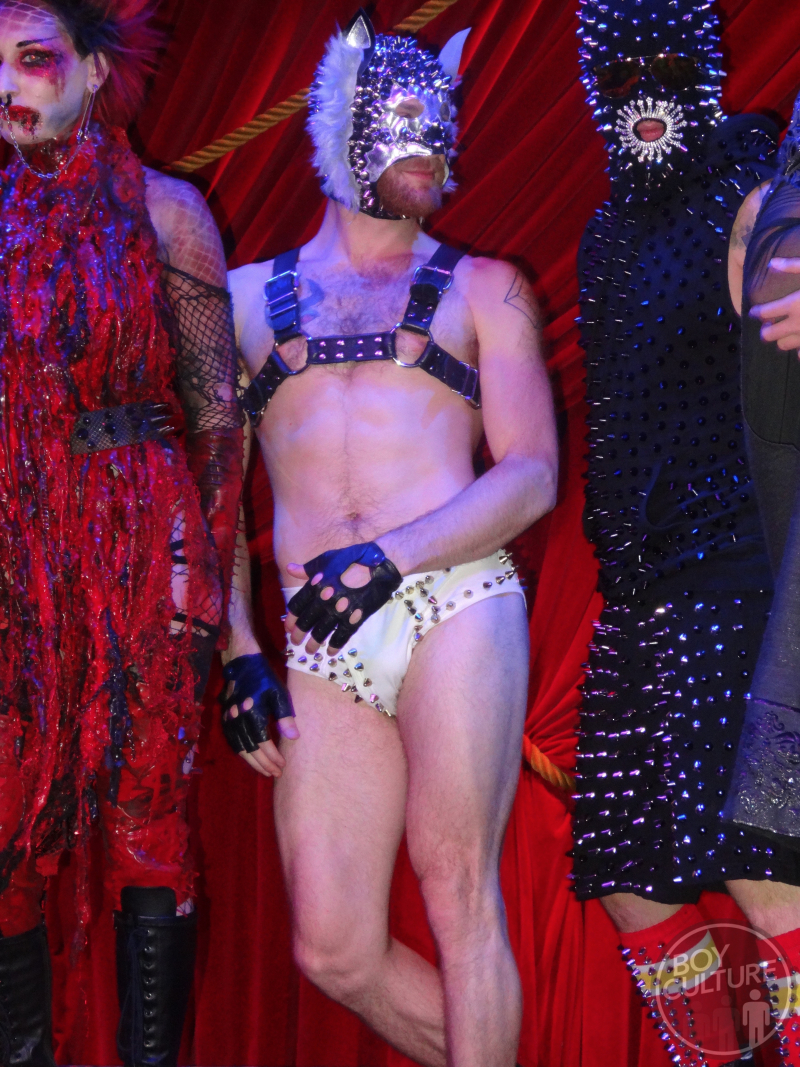 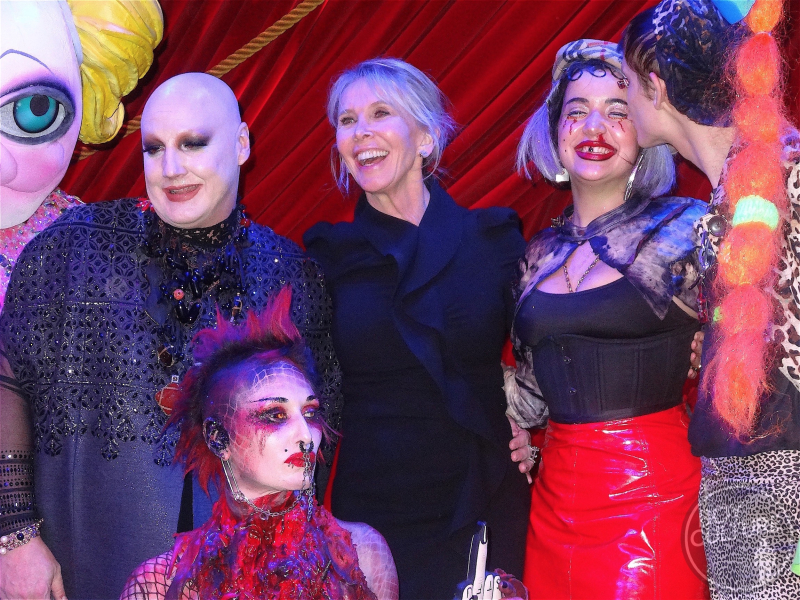 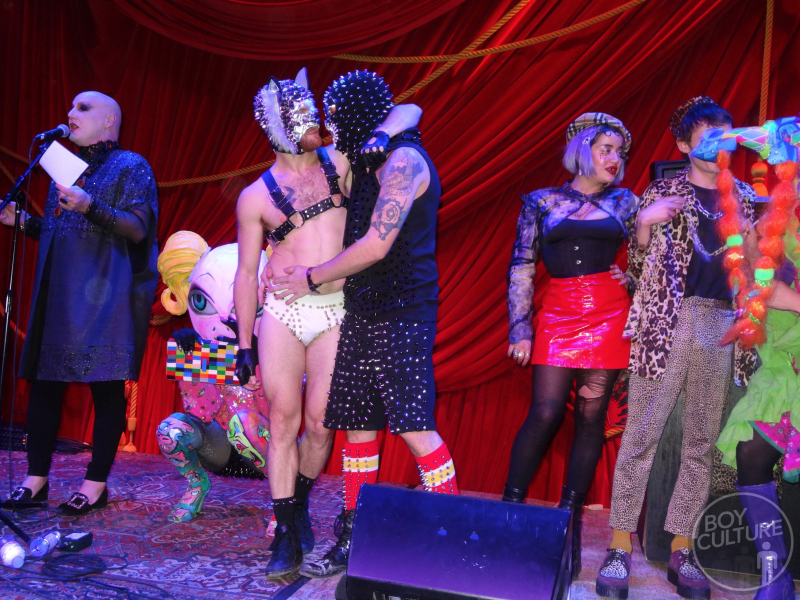 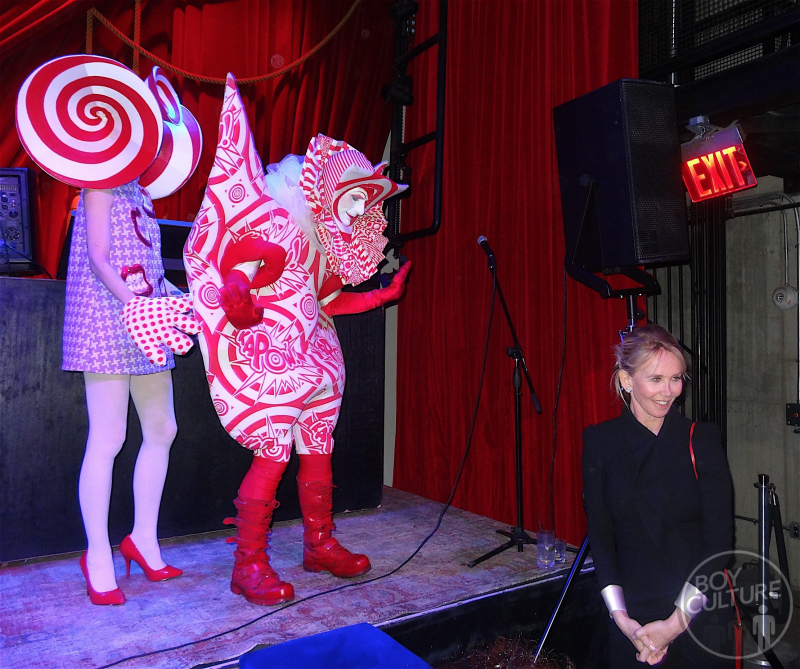 Things got colorful at the after-party! Trudie, Donna Karan and others joined James onstage for the hijinks.

Andrew Saffir of The Cinema Society sure knows how to throw a party! The after-party, at Public Arts (215 Chrystie St.), was dripping with glamour, downtown grit, drag and drinks, and as I told Nelson — even more charming as himself — it won't be every movie he's in whose premiere is celebrated with a live performance by John Cameron Mitchell and Lena Hall!

Yes, I later approached Mitchell to tell him I'd been a fan since 1987's The Stepford Children. He was tipsily amused, muttering, “Barbara Eden ...” and wondering aloud if it's still shown on cable. 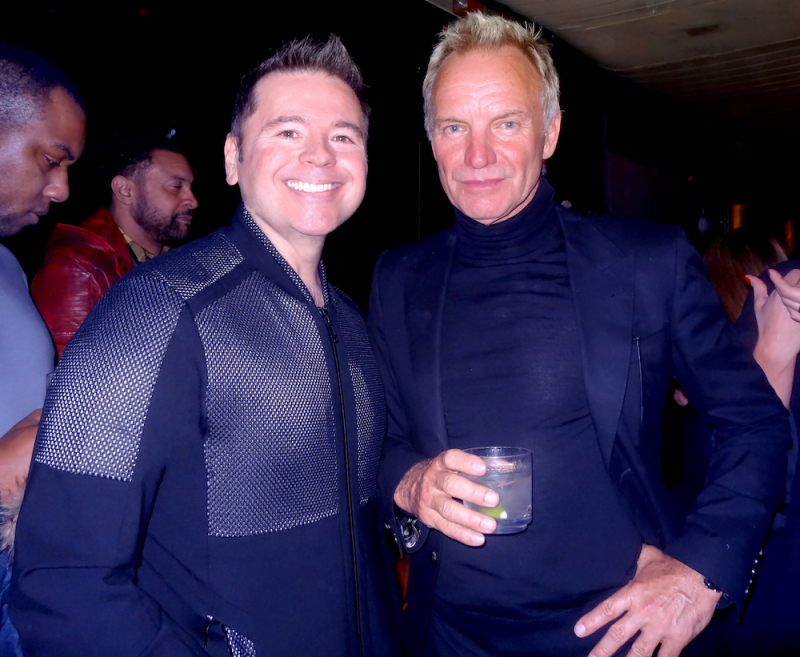 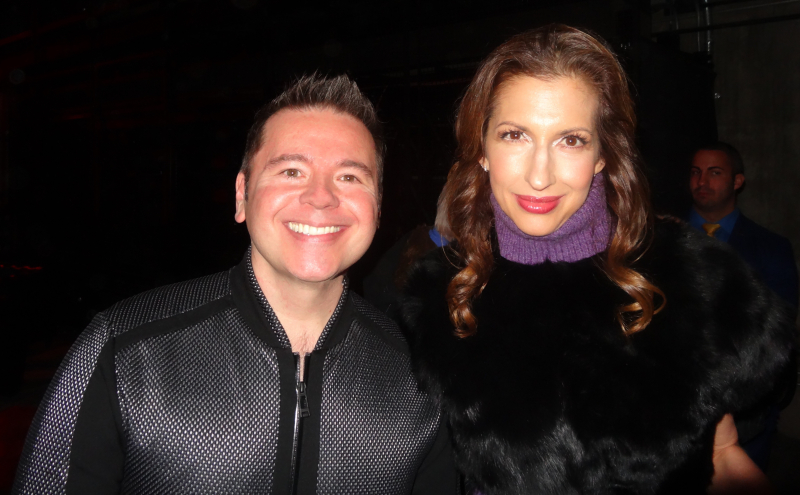 With statuesque Alysia Reiner of Orange Is the New Black, pic by her actor hubby David Alan Basche 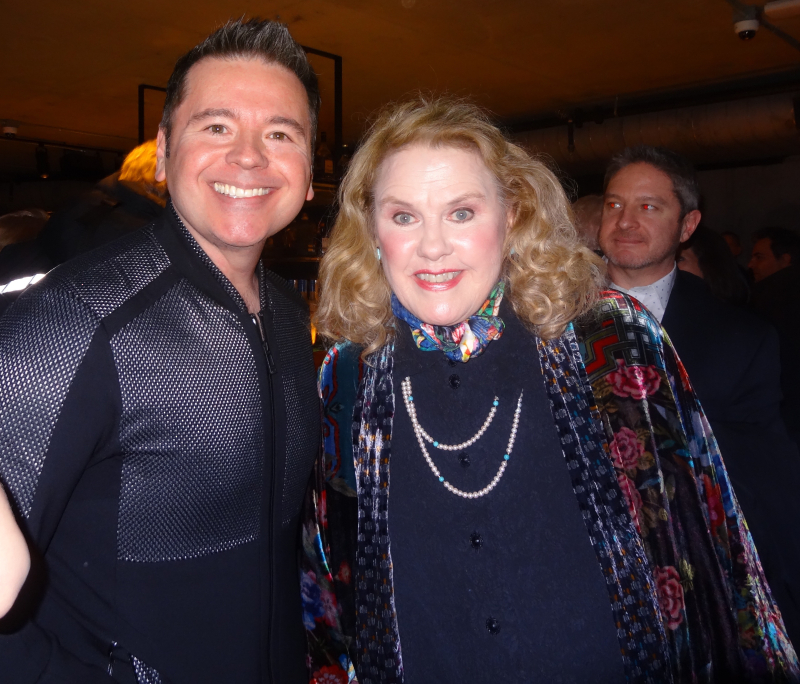 I can't say how much I love me some Celia Weston! 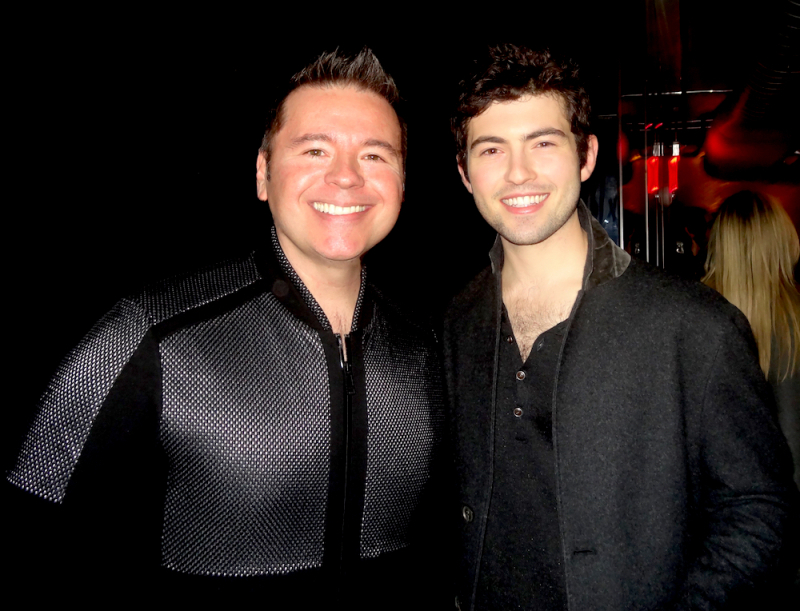 With Ian Nelson, the film's leading man. Adorable! We look high. It's the flash.

Trudie was very kind to me, even though I had to ask an obvious model to take our pic. Trudie wanted to know if people had laughed near me, showing her nerves as a director. I told her they laughed plenty, as there are many light moments in the film, even if it also packs an emotional punch.

Thanks again to James St. James for the invite. The whole evening made me regret my stubborn lack of glittery fabulosity.

Part of Trudie Styler's introductory speech is below. Sorry it's wicked-dark, but there was zero lighting, so this was all I could get, in case you're interested: