KENNETH IN THE (212): Scorching-hot tennis update.

Poor lil pink panther. Why AO18 have to do him that way?😭😭😭 pic.twitter.com/SXbpuMbDPh

THE FILM EXPERIENCE: Head over to Nathaniel's post for the final word on today's Oscar nominations, including which ones surprised him and which did not.

Hey, at least it's not gay, Oscar voters! (Image via Fox Searchlight)

THINK PROGRESS: Rep. Patrick Meehan (R-Pennsylvania) stands accused of sexually harassing a female aide, whose boyfriend he has admitted to envying. The aide claims jealousy turned to hostility, but Meehan's excuse is novel:

... [H]e dropped a bombshell: his hostility towards the staffer was because of Obamacare.

Meehan admitted to “lashing out” after learning about his staffer’s relationship, and attributed it to the pressure he was facing from constituents during the height of the debate over a repeal of the Affordable Care Act, according to the Inquirer.

Yep, it was Obamacare's fault. 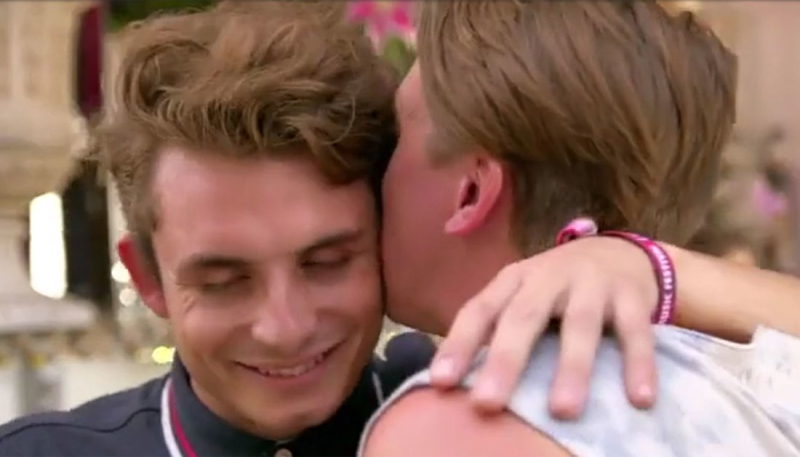 Affectionate? He was born that way. (Image via Bravo)

PEOPLE: Bravo is trying hard to get viewers to question whether James Kennedy of Vanderpump Rules might be gay, just because he's close with his gay BFF Logan.

USA TODAY: Chloë Grace Moretz gets sent to gay conversion therapy camp in The Miseducation of Cameron Post, currently wowin'g them at Sundance. She attended a screening with a talkback that offered a potent reminder:

To prepare for Miseducation, which is seeking distribution, Moretz consulted with actual survivors of gay conversion therapy, one of whom was in the audience.

“They were so candid with us,” Moretz recalled. “Thank you for giving us your story, and really telling us the darkness. And also (sharing) the moments of being able to meet other gay kids like you, where for the first time, you’re realizing you’re not alone.”

Although the film is set in the early '90s, Moretz and director Desiree Akhavan made a point to the crowd that gay conversion therapy is still a very real problem: Only nine states have outlawed it, and for minors only. (New York city council recently passed a bill banning the practice, for both minors and adults.)

The film is currently seeking distribution.

GR8ERDAYS: Connie Sawyer, who had been the world's oldest living working actor, died this week at age 105.

HUFF POST: Rachel Morrison is the first woman ever to receive an Oscar nomination for Best Cinematography. Ever?!

VOX: Sen. Tammy Duckworth (D-Illinois) is pregnant with her second child. She will be the first woman to ever give birth as a sitting U.S. senator. Ever?!

Has Ryan Reynolds got a Clue the uproar this remake will cause amongst 30somethings?! (Image via Paramount)

NEWNOWNEXT: Ryan Reynolds will remake 1985's Clue. Which is not a bad idea, because I'm telling you, it really, really isn't that great. It's cute, but sit and watch it again. It's got a lot of flat moments. It's no Murder by Death (1976), which it shamelessly knocked off.

TOWLEROAD: Watch cast members of the Broadway revival of The Boys in the Band talk about their approach to the play below. I think Tuc Watkins is the one who nails it: