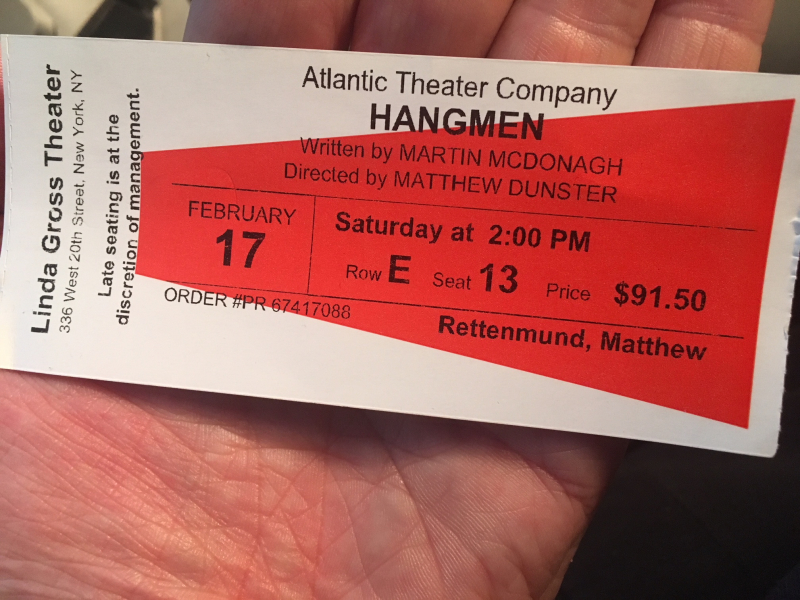 A real extravagance — and worth every penny. (Image by Matthew Rettenmund)

I liked, but did not love, Three Billboards Outside Ebbing, Missouri, written and directed by Martin McDonagh.

I liked and totally loved Hangmen, a new play written by Martin McDonagh that is playing in NYC through March 7 ...

I bought tickets months ago based solely on the participation of Maxwell Caulfield, and actor whom I adore but whom I'd never seen in a play — something he's said to do quite well. Only later did I realize I'd snapped up tickets to a really special and limited event, although one can't help but sniff a move to Broadway.

The 1963-set show stars Mark Addy as Harry, a UK hangman tormented not by his unsavory career or by a new era in which death by hanging has been outlawed, but by a personal rivalry with another hangman (Caulfield, in a small but pivotal, nearly show-stopping, role) said to be more famous than he.

Propped up by the sycophantic patrons in the pub he owns and operates with his nag of a wife (Sally Rogers) and his constantly belittled teen daughter (Gaby French), he comes toe to toe with a mysterious passer-through (Johnny Flynn) who colorfully suggests some forbidding connection to a possibly innocent man (Gilles Geary) Harry unsentimentally hanged a couple of years earlier.

The show is pitch-black comedy with no expense spared, including a breathtakingly filmic stage and impeccable period costumes (nothing overdone).

The acting is incredible, like All in the Family at its finest, the actors so deeply immersed in their roles I felt like some poor chap sipping a pint in the corner and praying they didn't notice me. 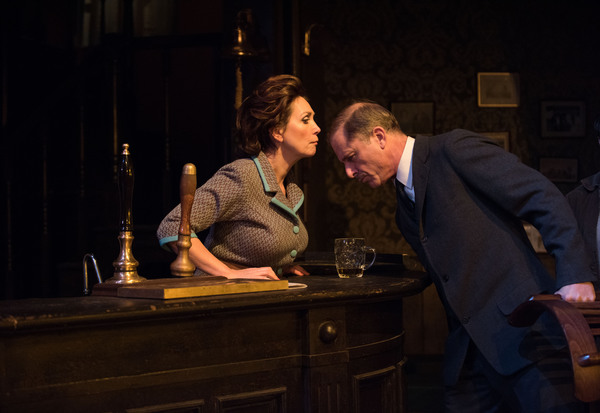 The show, like Three Billboards, explores the foibles of the salt of the earth. It approaches the finality of death as just another day in the office, not only for the hangmen (of which there are more than two), but for each and every character. Nothing is sacred, no bond is unshakeable and no comfort can be taken for granted — not financial security, not loyalty, not marriage, not even the bond between a mother and her “mopey” child.

The dialogue is spellbindingly real and real funny, too, enhanced by cunning staging.

It does not get better than this.

Sold out, schmold out — try anything you can to see it.