PERFECT: The Face Of That Trump Dating Site Is A Convicted Sexual Predator Comments (0) 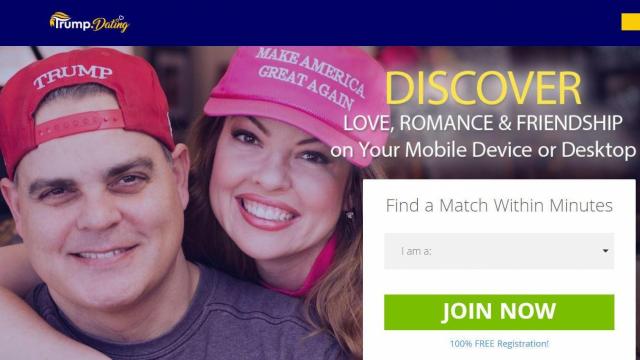 When you want to be sure to pass the stupid on! (Screen grab)

Remember that news story about the (legally sketchy to begin with) Trump.dating site?

Yeah, well, the idiot guy who is the possible founder and face of the site has a conviction for indecent liberties with a child, so that means he's not only the alleged president but also a member ...

Barrett Riddleberger grins from under a TRUMP cap on the site's homepage, embraced from behind by his adoring wifey Jodi.

He served no jail time (it's the South, and working-class people are the salt of the earth, so don't you dare say a word), but claims he has paid his debt ... somehow.

Anyway, not that Trump needs me to look out for him financially, but I'd sue the sucker anyway for using the Trump name without authorization.

The dumb is strong with this one.

The actual founder of the site may not be Riddleberger. Per CBS:

It's unclear who created the Trump.dating website. Riddleberger refused to answer most questions. A press release announcing the site's creation and a paid-for blogpost on the right-leaning Daily Caller website circulated within the past few weeks quoting a Sean McGrossier as the website's founder and owner. Attempts to locate him Monday were not successful.

The site is part of chain of dating sites tied to Friends Worldwide, which owns an entity called WhiteBoxDating. WhiteBox lets people create their own niche dating websites, providing the template and technical support for an initial fee and at least a 50 percent commission on gross income, according to the service's website.

The sites charge $24.99 for a month's membership or $101.94 for six months, prices set by Friends Worldwide, according to the service. Emails to various addresses associated with WhiteBox and Friends Worldwide went unreturned Monday.

Sounds like a total scam, which means it's on-brand with the Trumps.