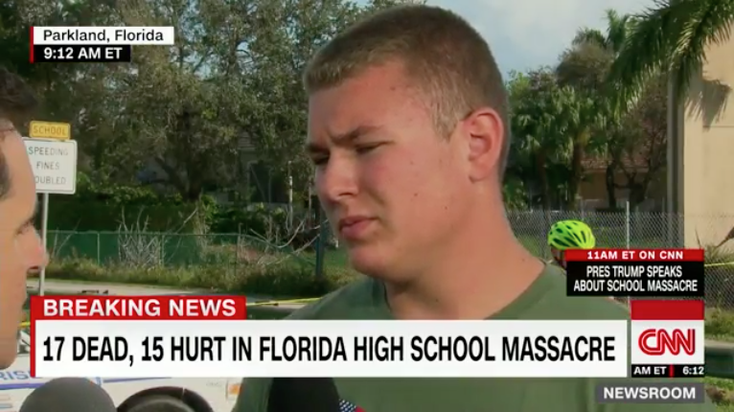 A few days ago, it was reported widely on right-wing sites — and trended high on Twitter — that Parkland shooting survivor Colton Haab had declined to take part in a CNN special about guns because the network had allegedly scripted a question that the boy did not want to ask. Instead, he had wanted to ask about arming teachers.

Or so his father, Glenn Haab, claimed.

Now, according to TampaBay.com, that story has been totally debunked, and the father is to blame. It appears the elder Haab doctored CNN's emails, presenting them to right-wing sites. He now admits the emails were not accurate, but — laughably — claims they were not doctored purposefully.

Just imagine: Your son is almost killed by a lunatic with an assault weapon, and rather than being concerned about his well-being, you're expending energy trying to smear CNN as being so liberal it was scripting questions. That smear does nothing more than further the cause of those who think guns should be everywhere.

The man loves guns more than his own son.

Meanwhile, the right has been barking that the kids of Parkland aren't really speaking with their own voices when they decry the lax gun laws in the U.S, and yet the only example of any kids being used by a special-interest group is this kid, being used by his gun-loving father.