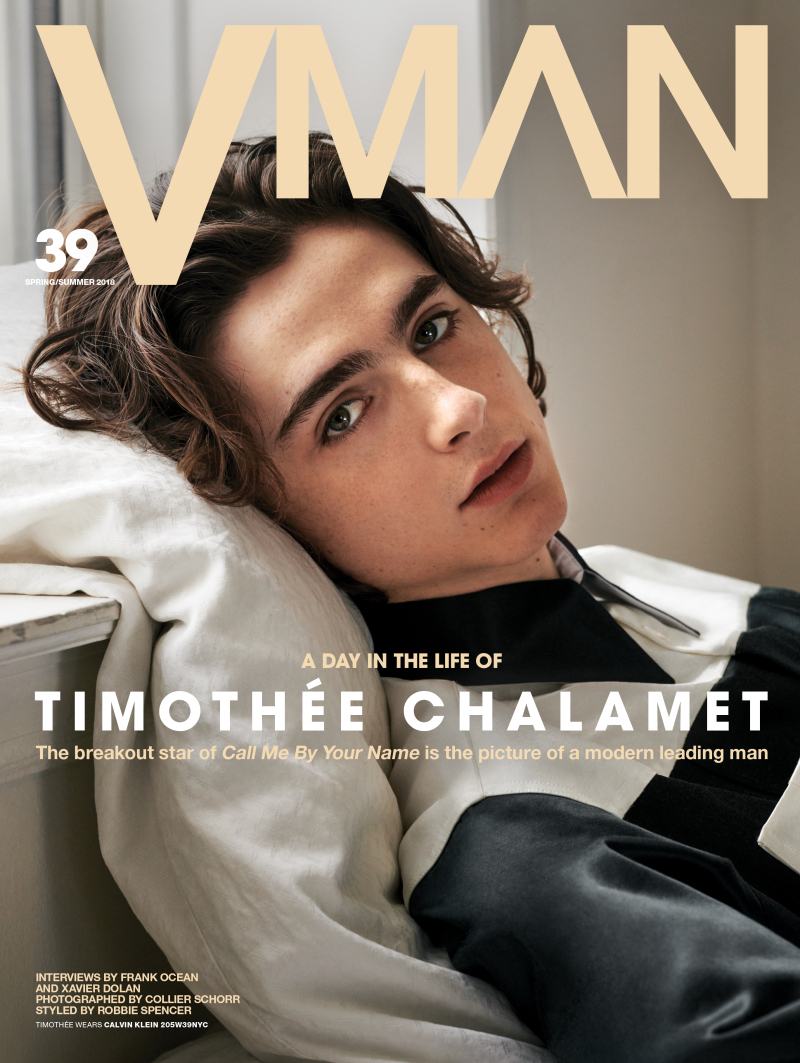 (Image by Collier Schorr for VMan)

Timothée Chalamet gives a characteristically mature interview to filmmaker Xavier Dolan for VMan, which he covers via a stunner of a shot by Collier Schorr ...

Another Schorr Shot of Chalamet Here!

In the piece, Timothée says:

My favorite movie is James White by Josh Mond, and it’s a testament to the filmmaking that I

couldn’t tell where the filmmaking was. It felt like watching a man’s journey. Josh has his finger on what it is to be alive now. You keep seeing stories told with similar tropes, and that, as a viewer, is what’s scariest to me. I’m not worried about being bad in anything, because I know I’ll be bad in things, and that’s fine. But what scares me is being boring, and being part of stories I feel too familiar with, or being cynical for the sake of being cynical.

The last sentence should be re-read by some of Call Me by Your Name's nastier gay critics.

He also talks about his chemistry with Armie Hammer, saying:

I wish everybody could hang out with Armie, because our relationship, the way it blossomed when we first met, was so conducive and helpful to what it is in the movie. I was way more inexperienced, and I knew seconds after meeting Armie that I was in the best hands. He’s an instinctual caretaker, which is part of his incredible performance in the film: his character wants to succumb to his love and desire for another human being, but also doesn’t want to hurt him. It’s best epitomized in this scene towards the end where I’m sleeping in bed, before the farewell at the train station. Oliver sits on the bed next to Elio and you see about 6,000 emotions go across Armie’s face: love, empathy, regret, and fear. There’s so much Armie in that moment; so much love there. We were also in Luca’s hands—this movie is Luca’s baby. Truer to this experience than in any movie I’ve been in, it felt like, hey, we gotta be into the director, but we gotta be into each other...

Meanwhile, Chalamet was also interviewed by out artist Frank Ocean for the same issue.

Ocean has raved about CMBYN. Here, he gets some terrific quotes out of the newly minted star:

FO Which school of thought are you in: that what you do is kind of in you, like a gift, this thing you’re really good at? Or, do you feel like whatever you decided to do and really believed in, you would’ve been good at?

TC I think I have to go with the first. I had this feeling I couldn’t not act and yet to get there I really needed teachers, and one teacher in particular, to make me comfortable with failing. To be bad and get over it—that opened the floodgates. I did a play in New York when I was 15, after this really difficult but ultimately helpful sophomore year in high school; that’s when it kind of took off for me. I’m also really passionate about music. I want to pursue other things creatively, not so much music, but definitely writing and directing. I’m going to be very, very patient about that. The dream as an actor is to be economically self-sustainable and what this year has been is beyond that now. I’m getting a creative license of sorts.