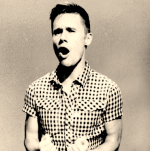 The adorable and vocally gifted Seth Sikes is returning to Feinstein's/54 Below with The Songs That Got Away, an all-new show of Judy Garland tunes he hasn't performed in his previous tributes.

If you've never heard him work and if this concept makes you cringe, get over the hump and give him a try — he really sells the songs, and his feelings for Judy shine through.

More info after the jump ...

Seth Sikes will return to Feinstein’s/54 Below in The Songs That Got Away, an all-new show singingJudy Garland songs he hasn’t yet performed in his previous tributes to the legend, plus some that Garland never got the chance to sing herself.

Sikes has been performing at Feinstein’s/54 Below in a series of consistently sold-out appearances in his critically-acclaimed tributes to Garland (which won a Broadway World Award), Liza Minnelli and Bernadette Peters.

The New York Times said of Sikes’s debut, “The performance — less an impression of Ms. Garland than an interpretation of her vibrato-heavy method of belting – was a hit.”

The critics were just as kind for his follow-up show Seth Sikes Sings Liza Minnelli and The New York Post said, “It was a heartfelt concert. Sikes has a heap of fans and his audiences are always tightly packed and brimming with enthusiasm for his booming, jazzy renditions of their favorite songs.”

Previously best known in the theater as an Assistant Director (on shows like The Band’s Visit, The Nance, and Pageant), Sikes will perform with a full band under the direction of Jesse Kissel. The evening will be directed by Eric Gilliland.

Cover charge starts at $30 and there is a $25 food and beverage minimum. Tickets and information are available at:

The show's title was, duh, inspired by: