Above: I'm a sucker for a tanline. 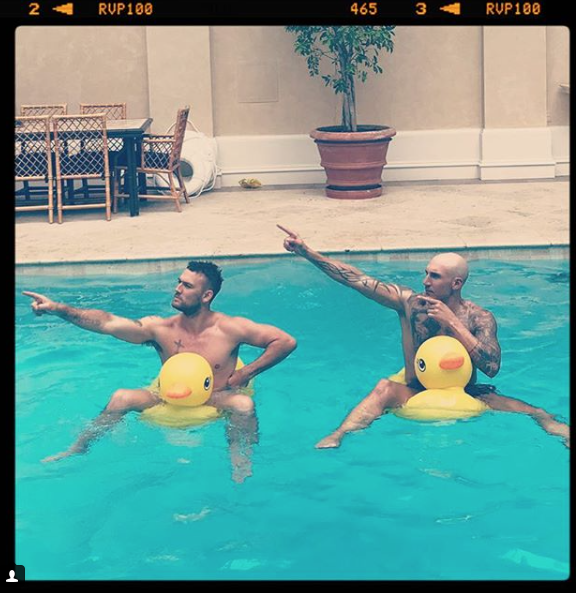 FORBES: Jeff Tidwell reflects on 35 years in business, and offers his Humanist + Activist approach to battling ageism and homophobia. His opening salvo:

Before you react, take time to understand the experiences and point of view of the people you interact with. That’s the humanist part.

You DO have a right to be at the table without discrimination though so, don’t ever back down. - That’s the activist part.

DLISTED: Even Barbra Streisand has to deal with fake news. Real nails, but fake news.

INSTAGRAM: Gus Kenworthy and his partner Matthew Wilkas met and chatted with Ricky Martin and his husband at the Oscars, then got separated — so Kenworthy posted a very clear invitation, a mock missing connections ad. And Ricky was just talking about open relationships a week ago. Hm:

AD AGE: CNN's Erin Burnett point-blank asked Sam Nunberg, whose interviews yesterday were more eyebrow-raising than a 1960s facelift, if he were drinking or off his meds. He does seem outta control, but in his defense — how can people surrounding Trump point fingers at Nunberg and call him crazy considering their boss's own actions and statements?

PAGE SIX: Madonna's Oscars bash is still called the best party in town ... and Madonna's older fans need to get the fuck over impotently trying to micromanage her life and career. She posed with Cardi B and that's your apocalypse? Check out Cardi B's heartfelt message about meeting her queen and tell me this is somehow a bad thing. Madonna's not too good to mix with young artists, and what a crashing boor she would be if she took herself as seriously as her critics accuse her of doing, or as seriously as some of her shook fans want her to.

KENNETH IN THE (212): How would you like to see this businessman at the urinal next to you at work? Sexual-harassment bait!

HAARETZ: Etty Ausch, a Hasidic woman profiled in the Netflix doc One of Us about people leaving the Hasidic community, has come out as a lesbian. Netflix knew she was gay, footage of her with her GF was filmed, but the company decided to exclude that information from the final product.

PEOPLE: Tony winner Ruthie Ann Miles was seriously injured and her 4-year-old daughter and another 1-year-old pedestrian were killed when a woman plowed into them with her car in Brooklyn. The driver, Dorothy Bruns, was in a car cites four times in the past two years for running red lights; she is claiming a seizure, but there is no evidence of that yet. Also, she apparently attempted to drive away before crashing into a parked car — dragging the 1-year-old's stroller the entire way. I hope she gets life in prison.

POLITICO: The Congressional Black Caucus is sick and tired of sick and tired politicians sleeping in their chambers, which is against the rules and an abuse of taxpayer money. Also, they say it's “nasty.”