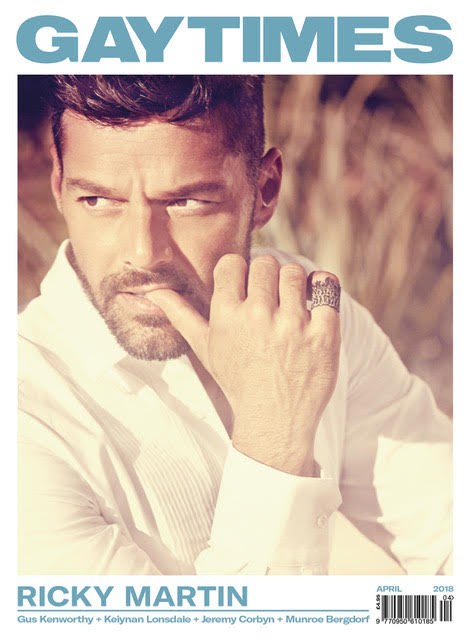 Every month, it's multiple covers for Gay Times, which is taking multiple bites at the gay apple.

The last one I had not yet posted features Ricky Martin. More pics of him after the jump ...

In the feature, Martin recalls being in Miami when Gianni Versace was slain. Twenty years on, he would play the fallen designer's lover Antonio D'Amico in The Assassination of Gianni Versace: American Crime Story:

When [the murder] happened, I had a contract with Giorgio Armani. I was invited to Gianni’s parties and to the fashion shows, but obviously I couldn’t go because it was one of those things. When I walked into the house to film this — because we shot in Miami in the actual house — it was for the first time, and I thought, “I’m going to use that and be open to whatever this piece of furniture or this window or these ceilings will give me.” It was special.

D'Amico spoke to Martin about his open relationship with Versace:

Antonio told me, “Yeah, we were free. We were free and we were really happy.” That was their love and it cannot be questioned. They were adults, they were together for 15 years. Back then, that was a lifetime and the fact that they were together for so long, that’s something to celebrate. It should not be questioned ... Love manages itself in millions of ways. I talk to my kids every day about how every family is different. Let me be, I let you be. It’s simple.