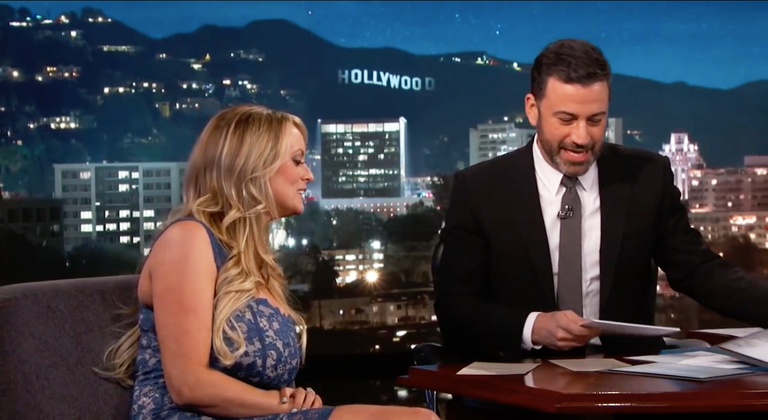 Daniels with Kimmel, before her lips got looser (Image via ABC)

The two have apparently never discussed the affair. The 64-year-old Gregory said her daughter stopped talking to her and she doesn’t know why.

“It hurts me deeply,” she said. “My friends all say the same thing: ‘I can’t believe that is the same sweet child — you took such good care of her.’”

Clifford’s estranged dad, Bill Gregory, is also feeling torn between his concern for his daughter and his love for Trump.

“I see her in the news — everything that’s going on — it’s hard,” he told Inside Edition this week. “It’s become a real mess, looks like to me. I like Trump and I like my daughter. I don’t want to pick sides. It’s unfortunate that it’s gotten to this point.”

Hey, Sheila, if you're wondering why your daughter won't speak to you, maybe it's because you and your husband don't want to pick sides when one side is your daughter and the other is a total stranger who slept with her, tried to pay her off and is threatening to sue her for $20M.

But hey, at least Trump hates brown people like you do, right, Ma?

The Dallas Morning News piece is really fascinating, including more quotes from Stormy's parents, from her neighbors and some insights into other aspects of her life.