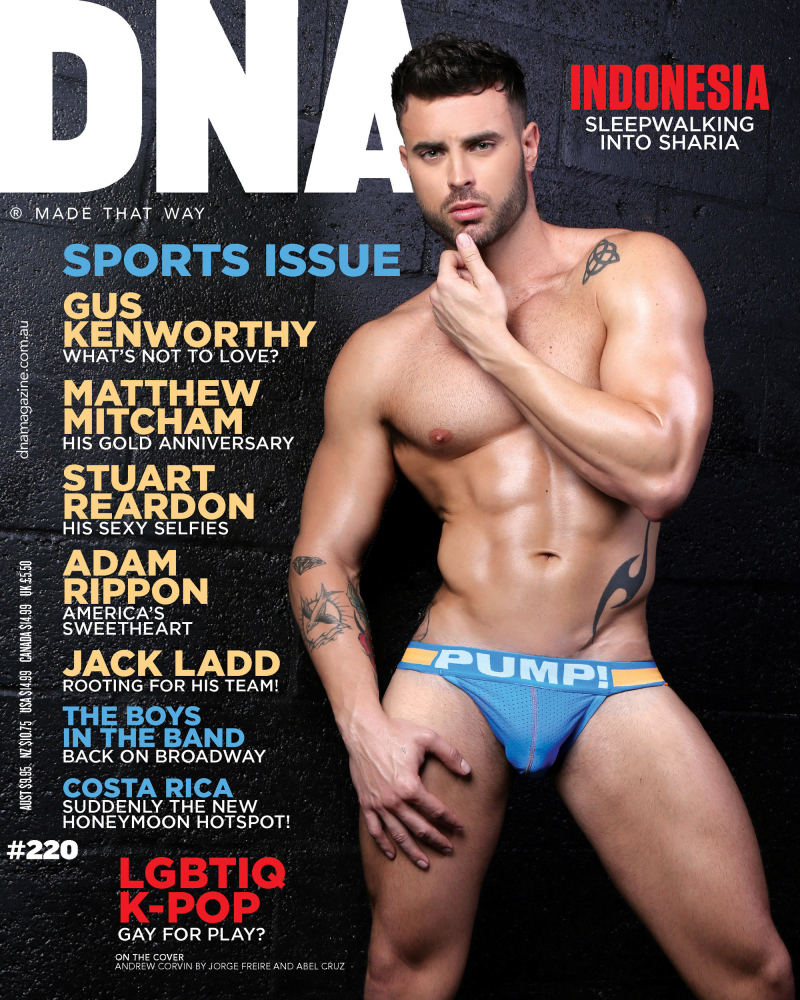 Keep reading for another taste ...

Slip into your hottest jockstrap and spray on some extra deodorant – it’s the Sports Issue!

Meet the Players… Adam Rippon, America’s ice-skating darling; Gus Kenworthy the hunky out skier loves kissing his boyfriend – and Adam Rippon! We’ve got UK rugby’s Stuart Reardon who’s not only a total tattooedhunk, but now and author and accomplished photographer and we have some very sexy selfies from Stu to prove it! And Olympic Golden Boy, Matthew Mitcham on being the first openly gay athlete to win Olympic gold and the highs and lows of his ten years since then!

We also have a sexy story from Jack Ladd recounting a very memorable encounter with a high-profile rugby fantasy!

Rocking the Pump! jockstrap on the cover is American model Andrew Corvin – and there’s a lot more to see of him inside.

In the serious features department, we have an excellent news story on Indonesia’s slide into repressive religious laws that are going to make gay sex illegal. And we have a fascinating insight into the K-pop industry: for a country that does acknowledge homosexuality, they certainly use a lot of boy-on-boy imagery to sell music!

In travel, we reveal Costa Rica as the new gay honeymoon hotspot. In popculture we catch up with Tracey Thorn, Datarock and Melodywhore. In theatre, it’s all about the Broadway revival of The Boys In The Band, Trevor Ashley’s Bodybag, and the Catherine McGregor story, Still Point Turning.