Bodies Of Work: 10 (Or More) Of The Best Golden-Age Physique Photographers Comments (0) 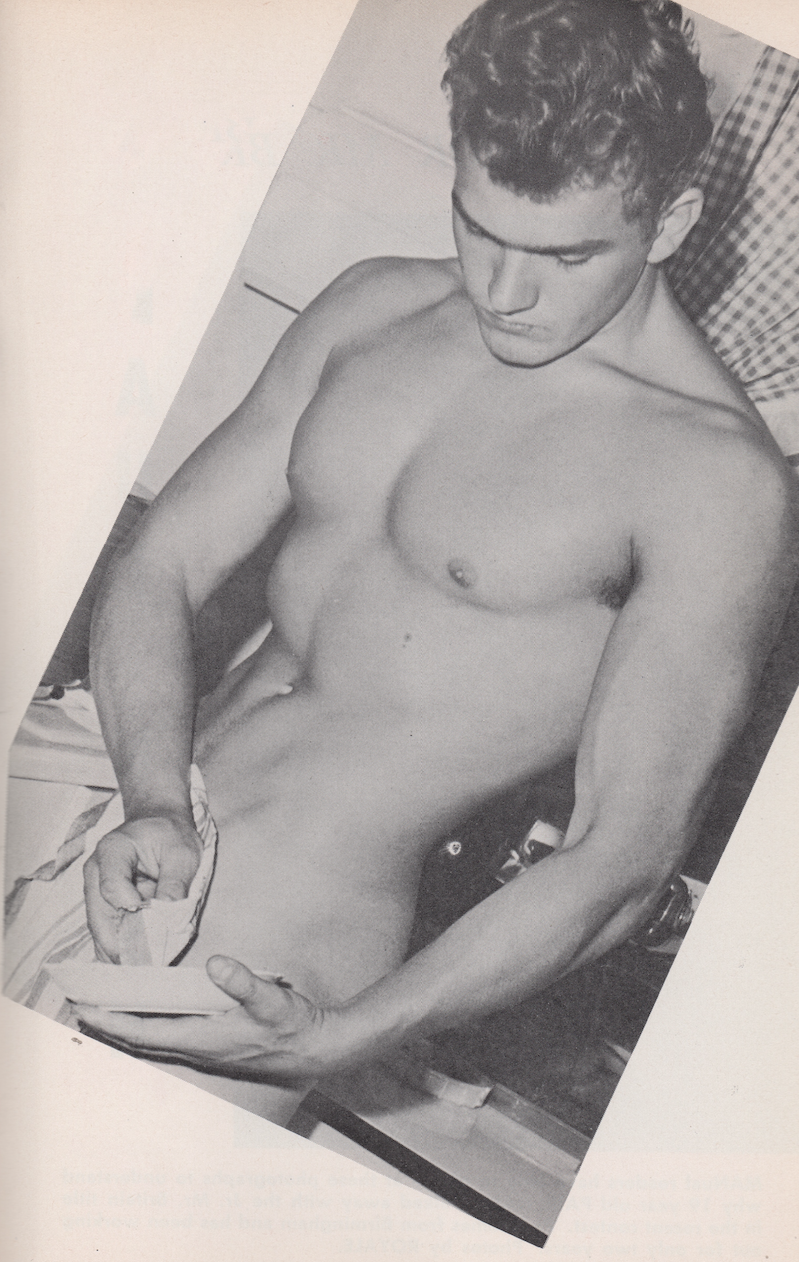 BigKugels Photographic is the place to go for vintage beefcake photography of the 19th and 20th centuries, a clearinghouse of grapefruit biceps, melon glutes, and cocky grins, all rendered in black-and-white — and usually captured artfully, a detail many in the art world overlooked for years because of all that skin.

I asked Bob of BigKugels to tell me the 10 photographers he thinks represent the best of the best in physique photography.

It was a heavy lift, but he hunkered down and delivered the goods, even if he cheated by tripling up a couple in his ranking... 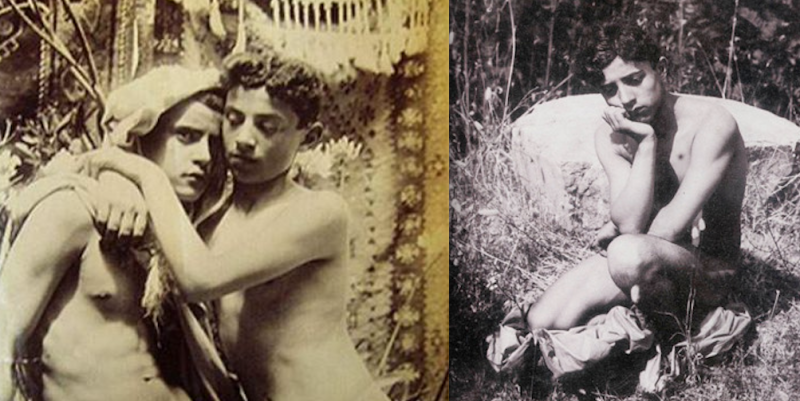 (9) French photographer Henri Oltramer (?-?). Perhaps lesser known than most, he mainly photographed the female model, but did such clear photography of the male form, too, including working-class models and bodybuilders.

Oltramer's 1900 image of a bodybuilder, cropped (Image by Henri Oltramer)

(8) Edwin Townsend's (1879-1957) studio work was stunning at the time and quite artistic. Today, he is best-known for capturing the beauty of the famous Tony Sansone (1905-1987), one of the most famous bodybuilders of all time. His work has that lovely Pictorialist approach with a softness to the image and a dreamy quality found in early work from that era. 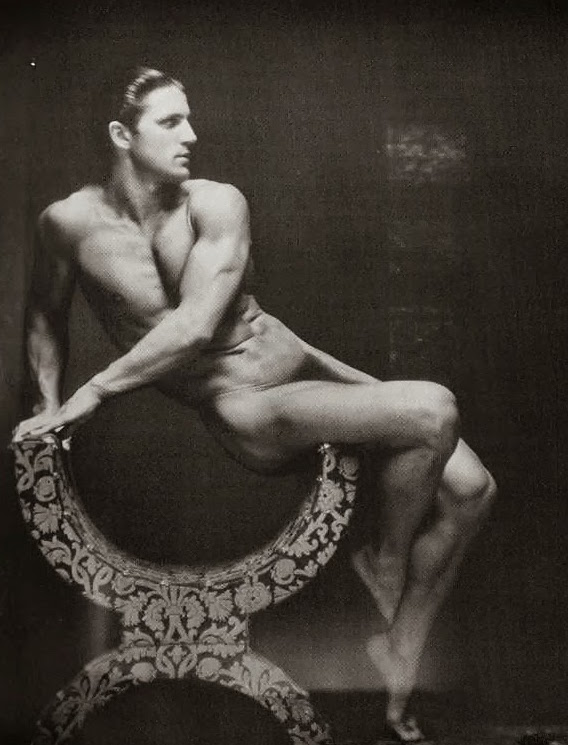 Sansone by Townsend, who was a huge inspiration to Lon of New York (Image by Edwin Townsend)

(7) The Ritter Brothers, Fred (?-?) and William (?-?), were great models as well as great photographers, highlighting German Naturist images of exercise and breathing fresh air for the health benefits. And we benefited from the handsome aesthetics of the work and models. 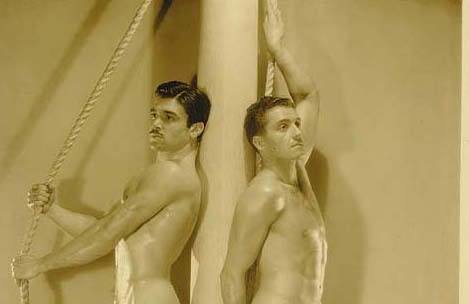 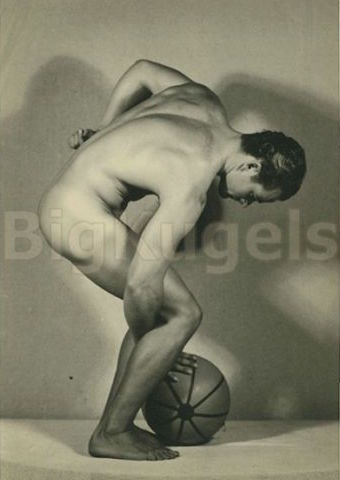 (6) Another early photographer was Lou Melan (?-?). He worked alongside photographers like Townsend and the Ritters, capturing models in the studio and outdoors. Two of the brothers who posed for Melan were the body-culturists Frank (1918-1996) and Bill Hillgardner (1915-2001). Some of his best work parallels any of the work from the Ritter Brothers. Melan was also a photographer for New York's Metropolitan Opera in the 1930s and '40s. A stunner by Lynes (Image by George Platt Lynes)

(5) The famous George Platt Lynes (1907-1955) was very conceptual and artistic, and his work went well beyond beefcake, into fashion photography and photographing the American Ballet Company in the 1930s. His private work, however, was very homoerotic at times, certainly not considered in the work of his predecessors in such an honest way.  He was not trying to appeal to the bodybuilding audience of Strength & Health as the others perhaps were. 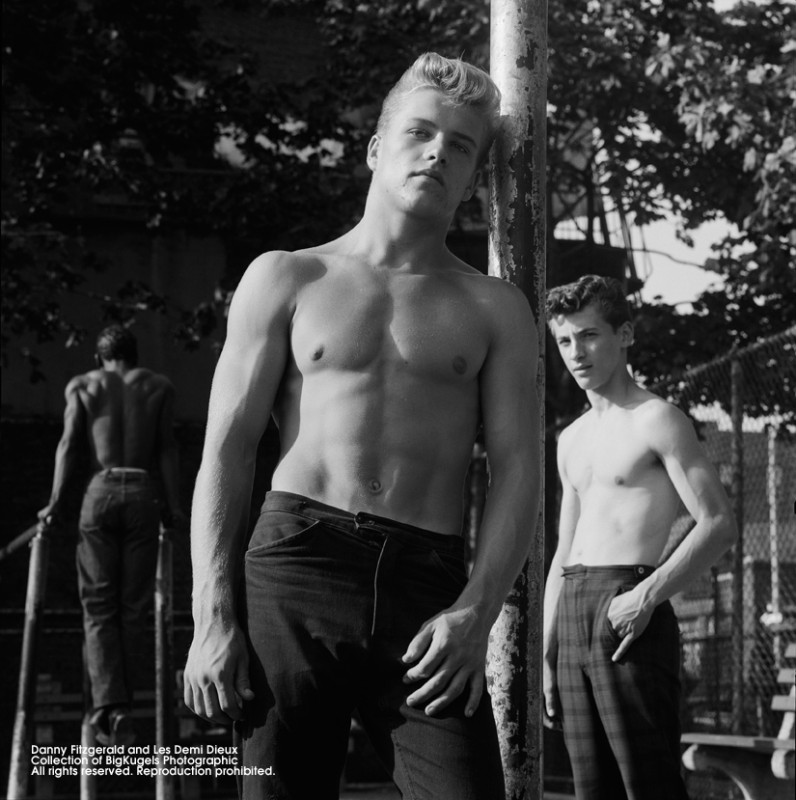 (4) I really feel the work of Danny Fitzgerald (1921-2000) aka Les Demi Deux transcends traditional beefcake. It really goes well beyond that into a more conceptual and aesthetic approach. Of course, like many, Danny had his roots in tradition and classic bodybuilders, but that is not where his interest lay, as seen in the types of models he chose — not bodybuilders at all.

Some of his work certainly inspired later contemporary photographers. 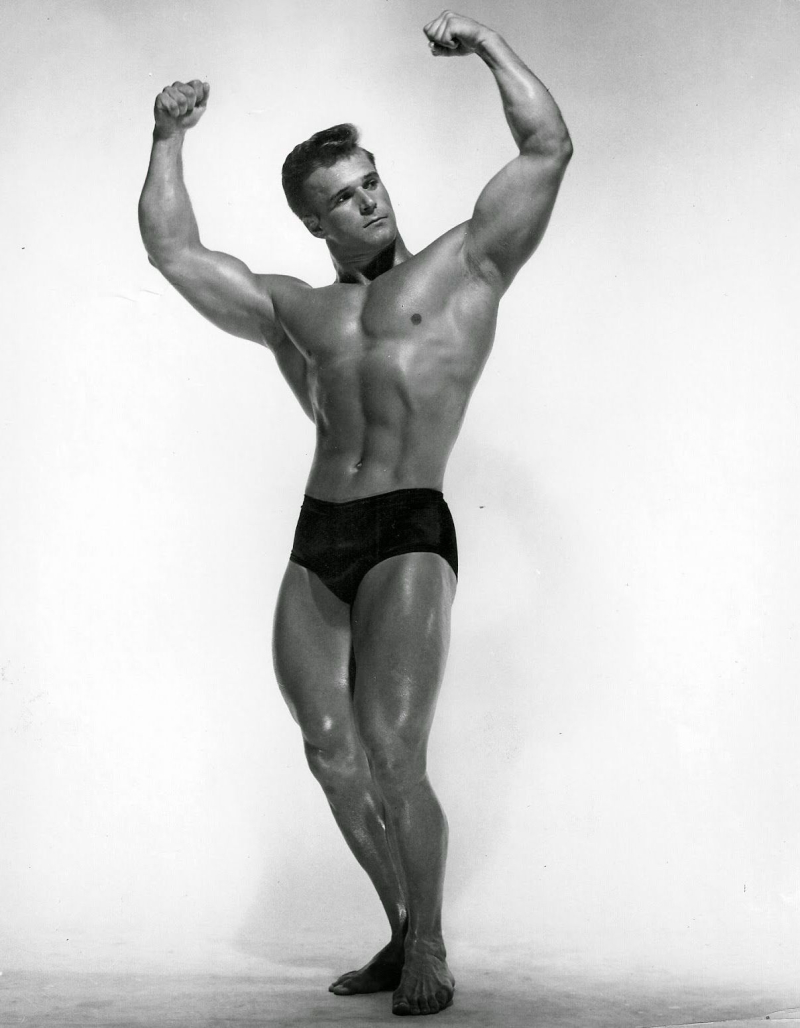 (3) Douglas Juleff (1917-1999) aka Douglas of Detroit was a master of lighting with such beautiful studio work featuring the classic bodybuilder. Of the group of 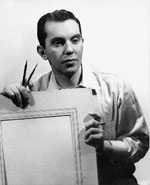 people publishing their work in magazines like Strength & Health, Tomorrow’s Man, and others, he elevated the male physique to godlike beauty. Great darkroom skills as well. His prints are lovely and tonally rich.

Ed's Note: Check out this piece on the man who rediscovered Douglas of Detroit, who stopped working after a traumatic experience similar to what most if not all beefcake photographers endured:

But during the McCarthy era, nude imagery was considered obscene. It was illegal to send anything like that through the mail. Early in his career, Douglas had taken a photo of a Detroit police officer with a nightstick and an erection (the irony). Several years later, in the late 1950s, it landed on the captain's desk. His house was ransacked. All his prints and negatives were confiscated by the police, and his father, whom Douglas lived with at the time, assisted by handing over whatever he could find. Douglas was traumatized. Many of his models' lives were destroyed as well, and the guilt settled in good. Shamed, Douglas quit taking pictures altogether. The few prints and negatives he had left in his studio at Hudson's — where he occasionally shot, developed and printed portraits for clients after hours — are all that remain. Lon, unlike some of his peers, shot many black models. (Image by Lon of New York)

(2) Alonzo Hanagan (1911-1999) aka Lon of New York was working alongside people like Douglas of Detroit in the 1940s, but he had a very long career as a photographer, shooting some of the greats of competitive bodybuilding like John Grimek (1910-1998) and others. While Lon did not seem to care about making every print he made clean and beautiful, he was a great technician when he wanted to be. Some of his early prints that have passed through my hands are absolutely stunning, often filling the frame with a lifelike quality that I have not seen in the work of others. Hard to explain, really, but in person, this particular work can be palpable and have a freshness to it that is very approachable. 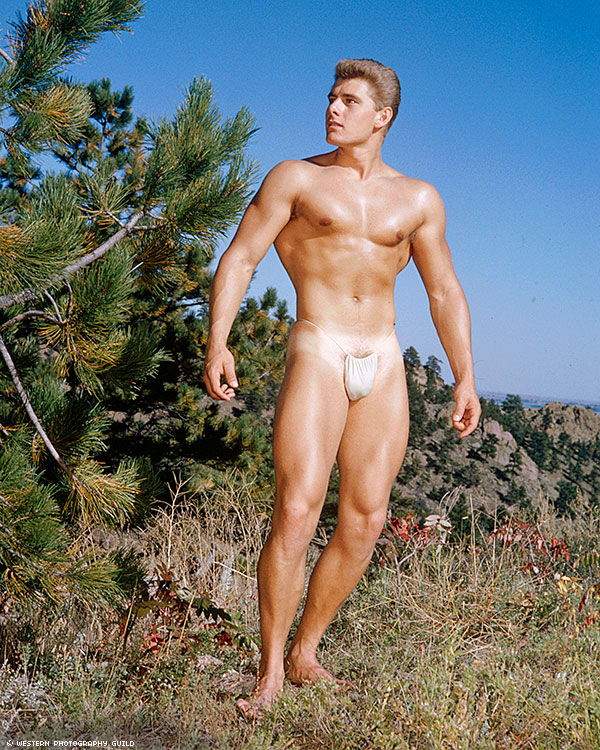 I love each of them for various reasons. I love WPG for the wonderful outdoor work shot in Colorado. One is caught up in the freedom and the great West. 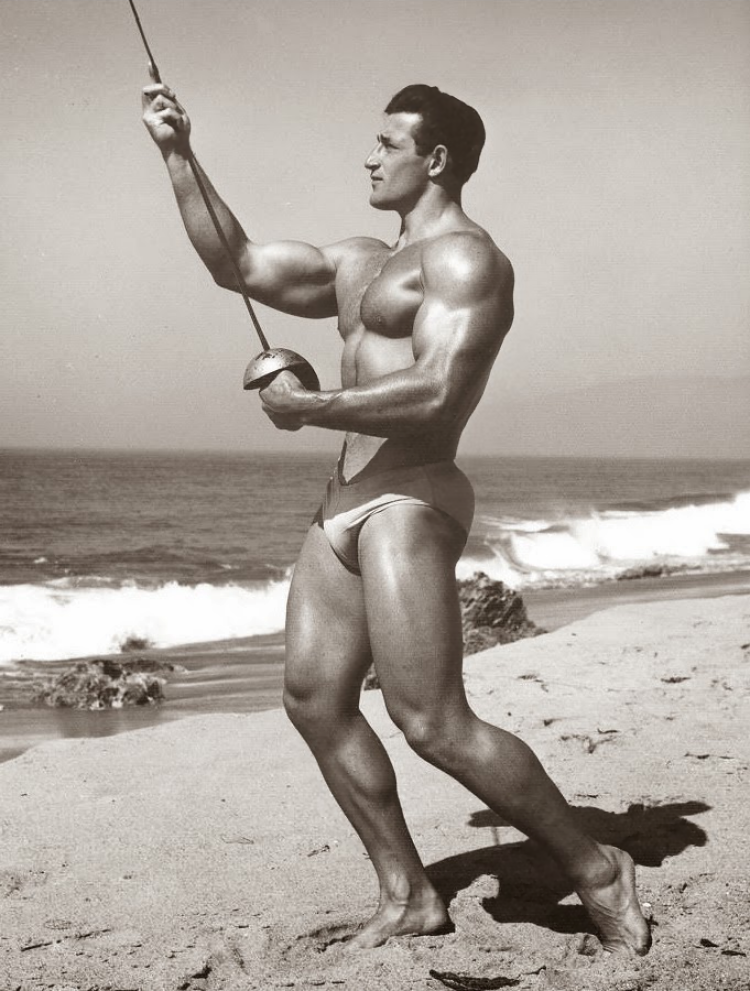 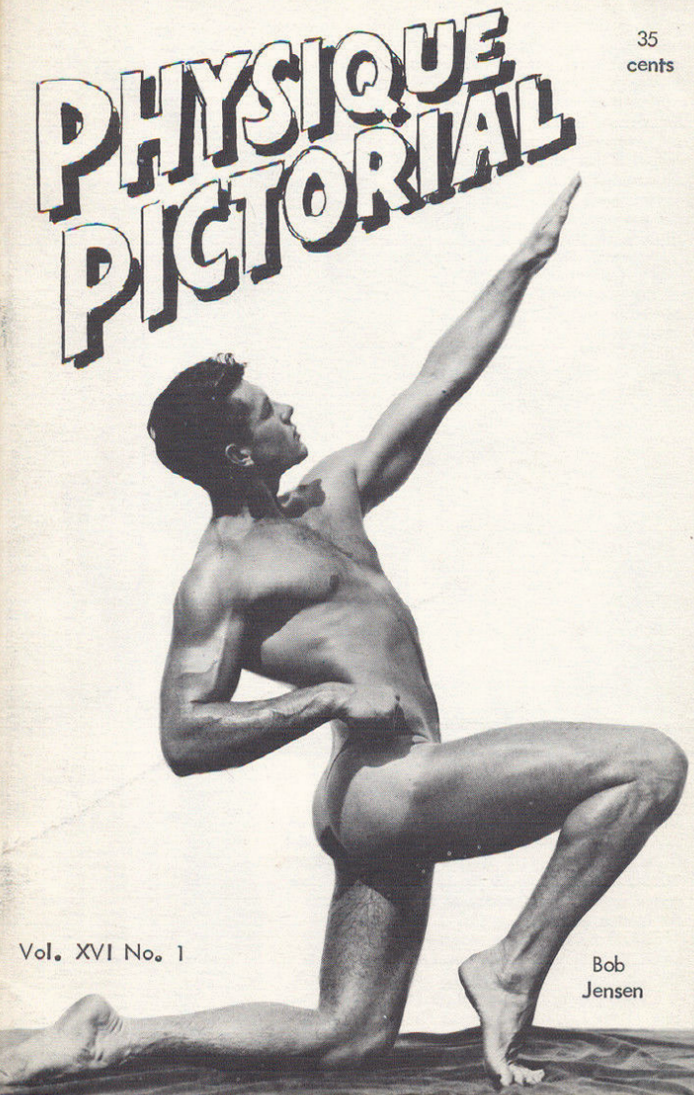 Mizer tops my list because he tried everything and was so playful and elaborate, creating sets unlike his peers and using projections to place his models in various settings.

Hope you enjoyed Bob's expert opinions as much as I did.

Obviously, there are scores of other beefcake photographers and influencers out there worthy of exploration and attention, but if I had to add any to the above list, it would have to be Chuck Renslow (1929-2017) aka Kris Studio, more for the uncanny ability in selecting models: 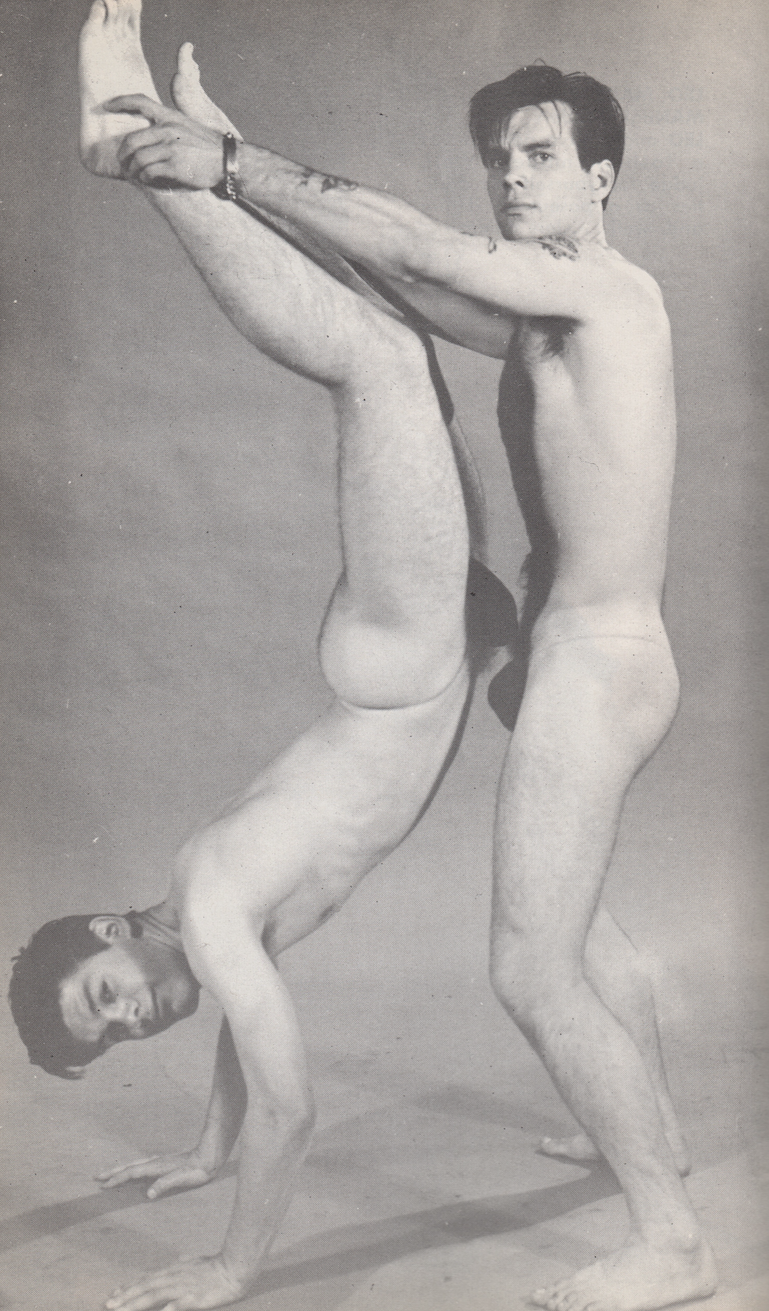 Kris had a way with duos (Image by Kris Studio) 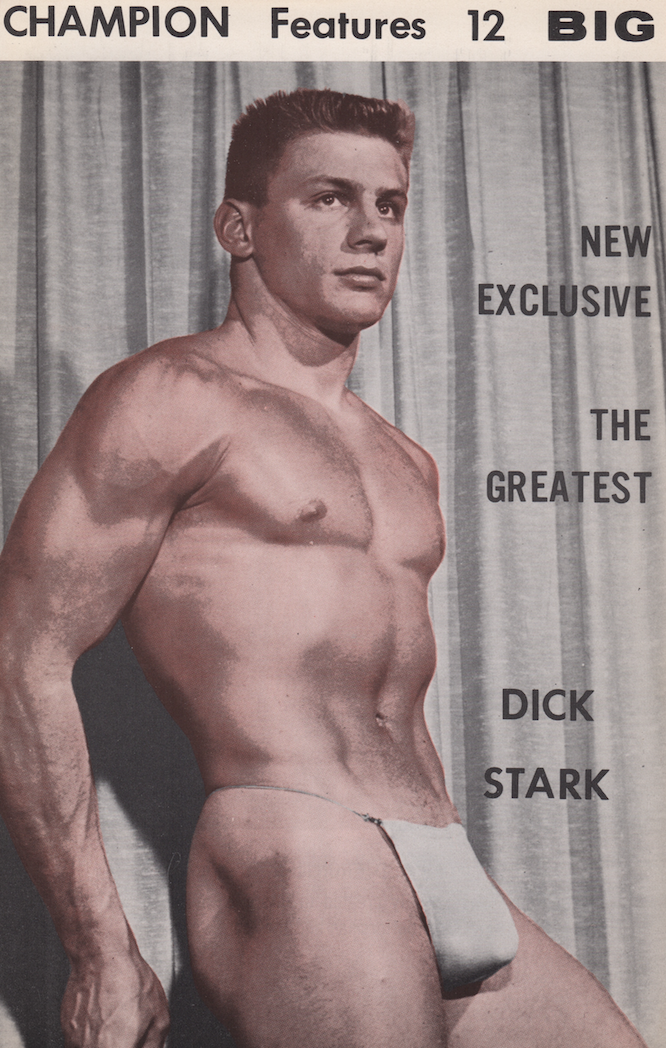 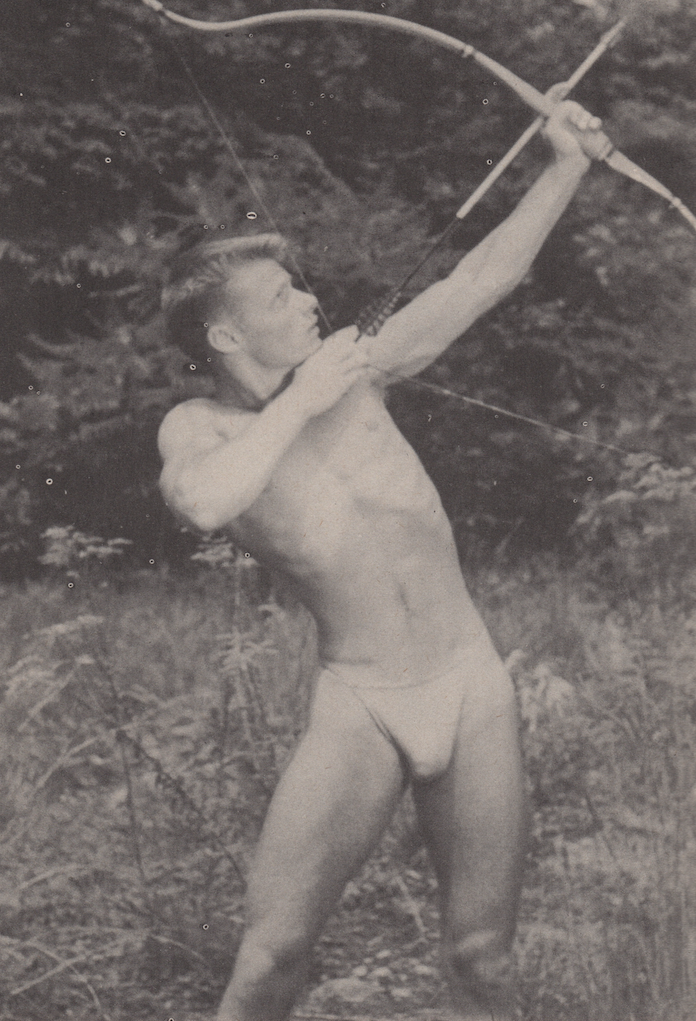