ADVOCATE: 100+ photos of gay men wallowing in desire at Foxhole.

CNN: James Comey's controversial memos documenting his interactions with Trump have leaked, and in them, Comey notes:

In his January 27 conversation with Trump, Comey recounted that Trump said “the hookers thing is nonsense,” but then later said that "Putin had told him, “We have some of the most beautiful hookers in the world.”

GOLDSTAR: Discounted Bon Jovi tickets for the This House Is Not for 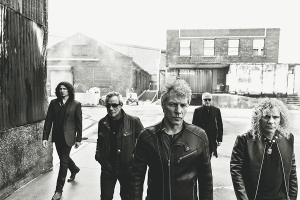 TIME: None other than Cher did the write-up for Adam Rippon, who was chosen by Time to be among its 100 Most Influential People. She wrote, in part:

When I was young, I had no role models—everyone looked like Sandra Dee and Doris Day. There was nobody who made me think, Oh, I could be like them. They represent me. Adam shows people that if you put blood, sweat and tears into what you’re doing, you can achieve something that’s special. You can be special. And I think that’s very brave.

Nice! (However, Sandra Dee was exactly four years older than Cher, not exactly a childhood role model for her anyway!)