BILLBOARD: There is now a Tommy Page Scholarship in honor of the late pop singer turned A&R man who died one year ago. It was such a tragic story — a husband and dad, a successful businessman, a performer. He was lovely in person. I am so happy I got to meet and chat with him, and to carry on a Facebook-message friendship for a bit. 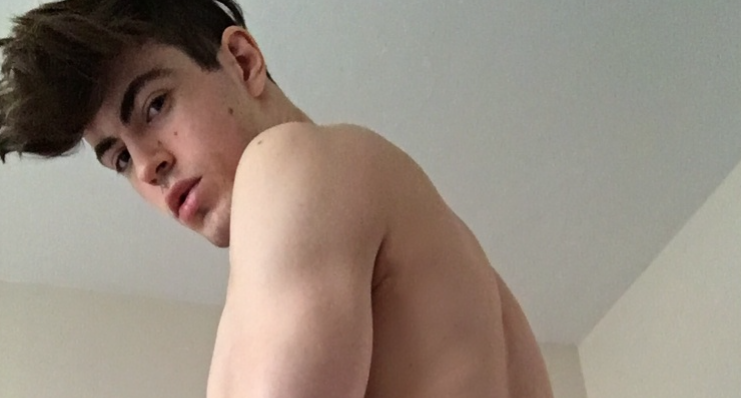 ONLYFANS: If you are thinking of starting an OnlyFans account, please use this link HERE — I'll get 5% of your earnings (OF takes 20%, but gives 5% of that to referrers), and if you have hot stuff, I will be happy to plug you on my social media and on the blog!

FACEBOOK: Speaking of Jesus ... Jesus, is it painful and hilariously watching and listening to Sarah Huckabee Sanders speed-reading to children the story of Jesus rising from the dead. She simply can not be bothered:

OMG BLOG: Looks a lot like Sam Smith is giving oral in this pic.

SURVEY: Please take this 10-minute gay survey — it would be most appreciated.

Do you take this man to be your lawfully wedded husband? Oh, ADELE! (GIF via GIPHY)

JUST JARED: Try to imagine being married by ... Adele. I mean, she could officiate a straight wedding and the couple would be gay by the end of it. In reality, Adele did indeed officiate a gay wedding — and she did it without anyone knowing until now.

HUFF POST: In case you're not paying attention, JAY-Z has a gay mom. Here, he describes feeling so happy for her when she came out — because she was finally free. I find that to be a very mature and enlightened response for anyone to have when it comes to a parent's sexual orientation not being exactly as expected.

HOUSTON CHRONICLE: Joe Watts, a towering figure on the Houston gay theater scene from the '80s on, has died after a battle with cancer:

In 1985, during an extremely homophobic period in Houston's history when many gays were deep in the closet, he founded one of the city's first gay theater companies, The Group Theater. That same year, as the gay community was reeling from the AIDS crisis and people living with HIV were objects of fear and loathing, Watts directed one of the first plays about AIDS in Houston. The Group Theater presented "One," featuring actor Kent Johnson portraying a person living with HIV. Houston Post theater critic William Albright selected it as one of the best productions of the year.

"He was truly a gay Houston hero," observes Larry Lingle, a retired Houston entrepreneur who owned Lobo, a gay bookstore that was a gathering place for gay men in the '80s and '90s.

COCONUTS: A petition is going around urging that Love, Simon not be rated R21 in Singapore. R21 is reserved for very explicit films, and Love, Simon is anything but.

YOUTUBE: Season 2 of Successful People is here, and it features Jeff Meacham (Black-ish) and Alec Mapa: