Amiss Before Dying: A Review Of PEACE FOR MARY FRANCES Comments (0) 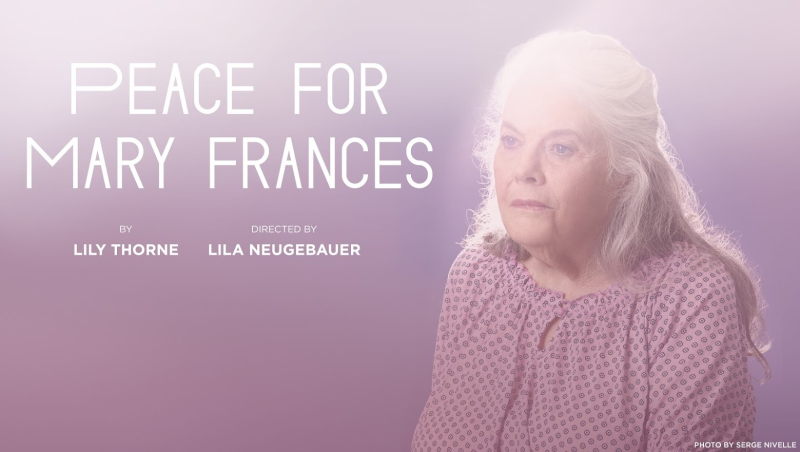 Lois Smith, 87 and still a master on the stage (Image via Serge Nivelle)

Lois Smith is giving one of the most challenging and dynamic performances I've ever seen from an older actor — she is 87 — in Peace for Mary Frances, a new dysfunctional-family drama with black-comic touches that opened Wednesday evening at the Pershing Square Center in NYC. 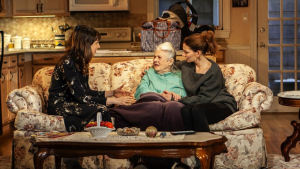 As I watched her masterful, emotionally exhausting take on a woman in hospice care welcoming death, I was reminded of the awe I felt seeing Estelle Parsons, then 81, stomping up and down the stairs throughout August, Osage County on Broadway in 2009. Smith is not stomping anywhere with this role, but she must affect the gasping breath of a person experiencing end-stage COPD, and at one point leaves her bed to holler at the top of her lungs out a window at the wayward daughter with whom she fights most and whom she loves best; it is a nuanced and often witty characterization that is well worth sitting through the show.

The show itself, written by Lily Thorne and directed by Lila Neugebauer, is less of a marvel, but it contains stellar performances and is often a queasily accurate depiction of how many of us die, a gut punch spiced with uncomfortably familiar familial situations, sibling spats, and high drama.

Set in Connecticut, the show frames Smith's character's slide into the grave by profiling her relationships with her children, controlling Alice (J. Smith Cameron, heroin addict Fanny (Johanna Day), and nebbishy Eddie (Paul Lazar), and grandchildren, new mom Helen (Heather Burns) and TV starlet Rosie (Natalie Gold), and their relationships with each other, mostly of the toxic variety.

The mother-daughter angst is what drives the play, and the love-hate chemistry between Smith, Cameron and Day is intense as the daughters go to war trying to out-nurse their mother and one-up each other. Eddie's uselessness and head-in-the-sand approach will ring a few bells for anyone who's been through a similar situation, as will all the finger-pointing by people who all seem flawed, albeit to diferent degrees and in different ways.

Trying to make sense of everything are two hospice pros (the note-perfect Mia Katigbak and Brian Miskell) and a homecare nurse (Melle Powers), but their jobs are futile, except the one job at which they can not fail — being there as Mary Frances slips the unusually surly bonds of Earth.

The play is imperfect — it is overlong, it sometimes feels tonally akimbo, and it has a remarkably unsatisfying ending — but there is a lot of truth on that stage, and it feeds these skilled actors, who in turn deliver a compelling night at the theater.