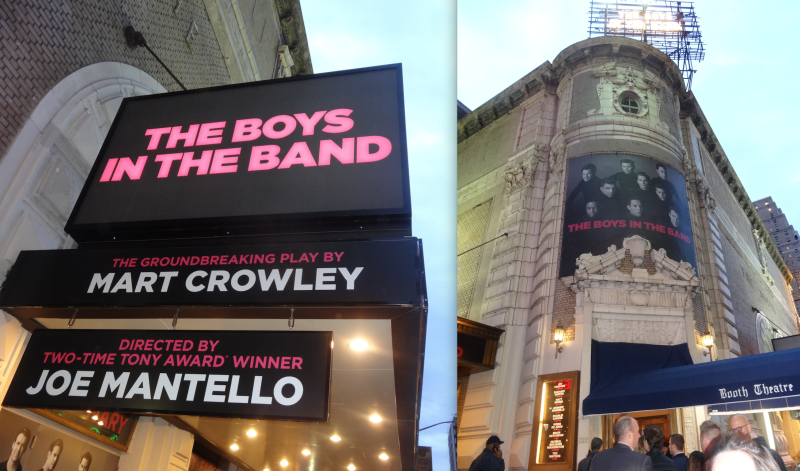 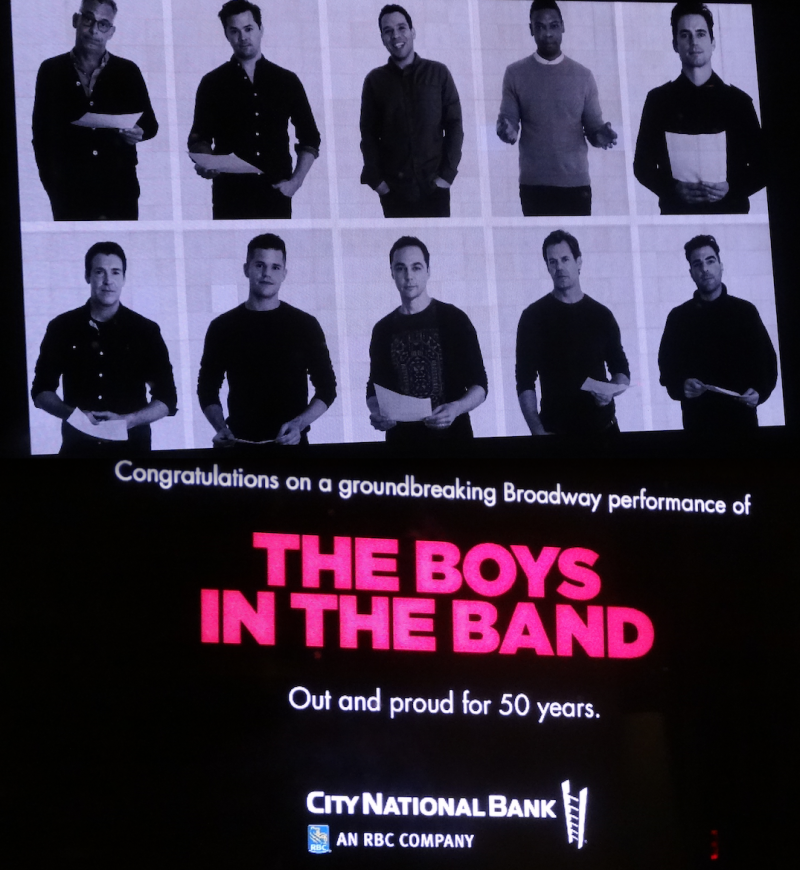 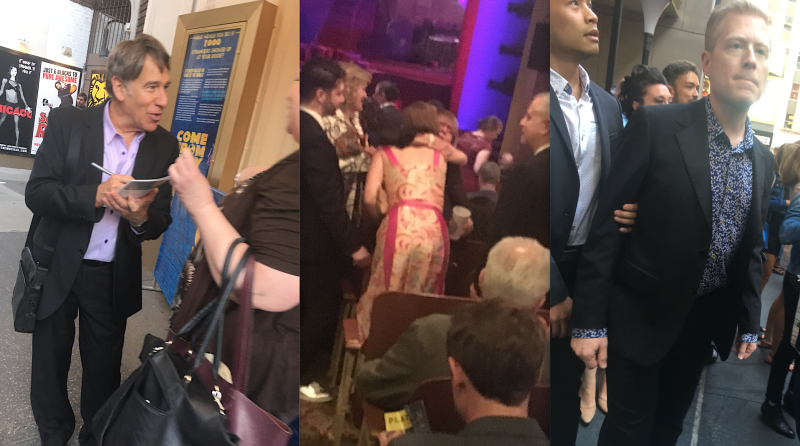 Making my way in, I spotted Steven Meisel — I was swooning contemplating Madonna's first work with him for Mademoiselle

all the way through their Sex book (he later beyond-politely declined a photo request because he'd had an accident and was sporting a shiner) — and then Lena Dunham. Lena was so approachable I couldn't resist asking for a quick selfie in the theater, which she happily submitted to. I also saw, four or five rows up, Patti LuPone greeting Christine Ebersole and also Stephen Schwartz.

Seated in my row was a tourist who slept through the consistently engaging production, and Larry Kramer with his husband, architect David Webster. Larry, who turns 83 next month, loudly protested his malfunctioning earpiece for 10 minutes, but nobody dared complain — I mean, it's Larry Kramer, faggots, and nobody wanted it to be the night we dissed Larry Kramer.

Full Review of The Boys in the Band — HERE

After the play — full review here — I went outside and randomly walked by Tina Fey as she was darting off. She was adorable! I asked for a pic and she was not just indulgent, she was totally, totally happy to do it. Probably one of my all-time favorite performers. I also grabbed (not literally) sexy Adam Rodriguez, who was happy to pose with everyone, as was fellow heartthrob Max Carver.

I bumped into my friends Mike and Domenick outside, and while I missed Robert Wagner (who runs fast for an octogen

arian), I did chat with Laurence Luckinbill, who was there with his wife, the fab Lucie Arnaz. Larry originated the role of Hank Off-Broadway in 1968 and played it in the 1970 film. He was effusive in his praise for the new production, and for the performance of Tuc Watkins in his old role. 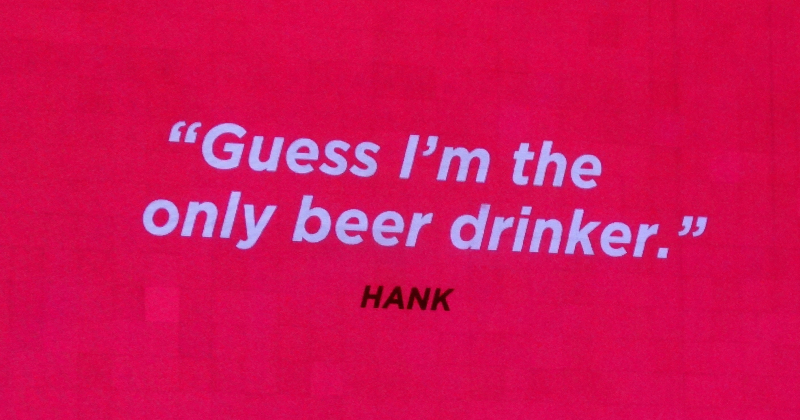 Having met up with Larry, I was determined to meet Peter White, who originated the role of Alan. Along with Larry, the's one of only three surviving cast members of the first Boys in the Band, the other being the elusive Reuben Greene, who is apparently living in Philly now and who was not at the show. (Forties movie actor Carleton Carpenter would have been a fun invitee as well; he took over as Michael during the show's original Off-Broadway run.) 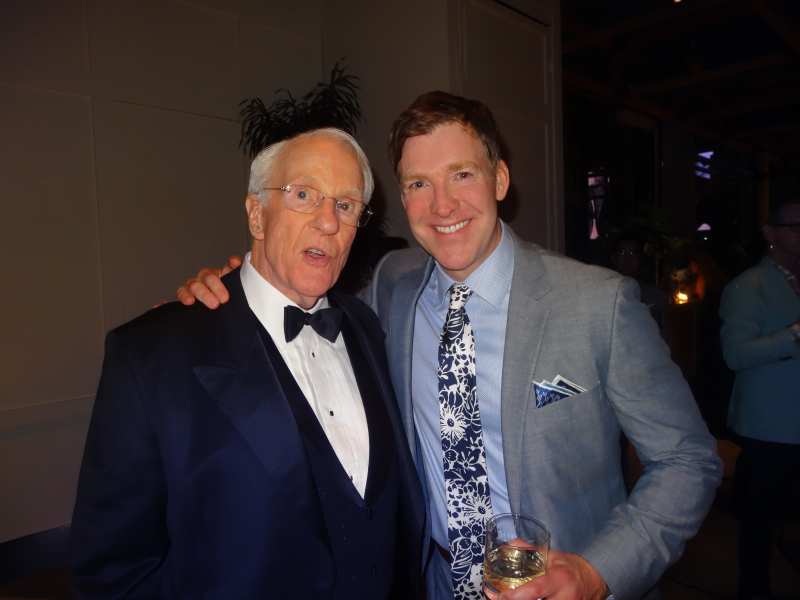 I went to the party and was invited in by a friend with an extra ticket, lucky me. The bash, at 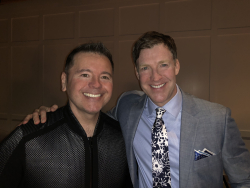 The Second Floor on 6th and 30th, was elegand but relaxed, and I bumped into Peter immediately! Peter, who is now 80, let us know he was wearing the original tuxedo he wore in the movie — still fits! He was personable and seemed a little embarrassed by the attention. Charmingly, he didn't stop talking while being photographed. It was really excited to get to tell him and Larry how much their performances in the film meant to me.

We had a cringeworthy encounter not long after, when we spotted Mark Cuban. 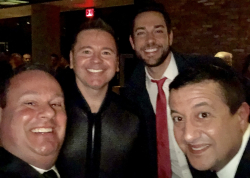 As my friend pounced on him for a photo, I realized it wasn't him, but a pretty great look-alike. The guy agreed to pose anyway, well aware of who people think he is. I asked him if he had any money and when he said no, I lost interest. We had better luck with strapping Zachary Levi, who told us he loved the play and was surprised how funny it was. 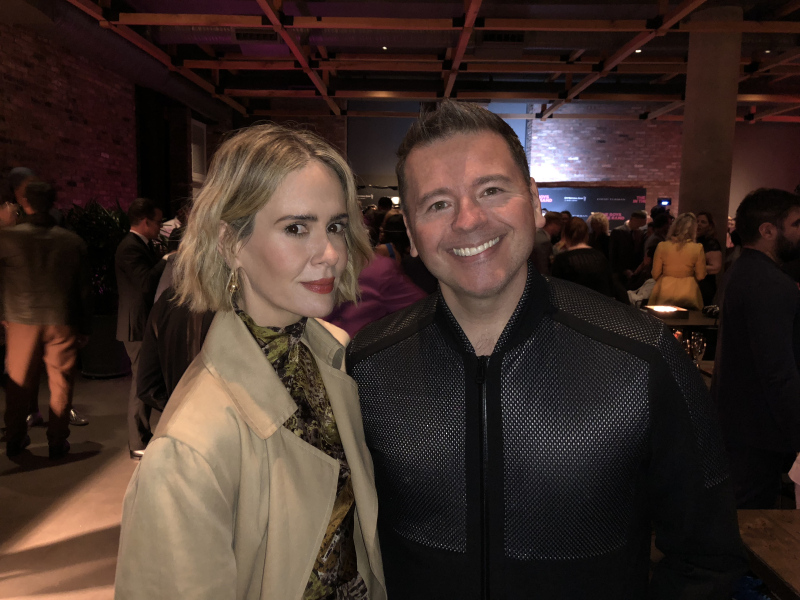 The photo ops at the party were plentiful, both for us and for the stars, who posed in every 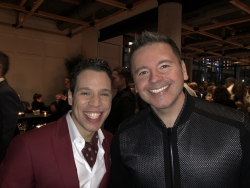 permutation possible, including with each other, with Crowley, with Kramer, with some of the celebs in attendance and, of course, with my gaggle of gays.

Sarah Paulson was our first get, and what a stunner. She could not have been more game, and made sure to pose working her good side. She knows her angles, and they work with mine — my best pic of the night. She loved the play. 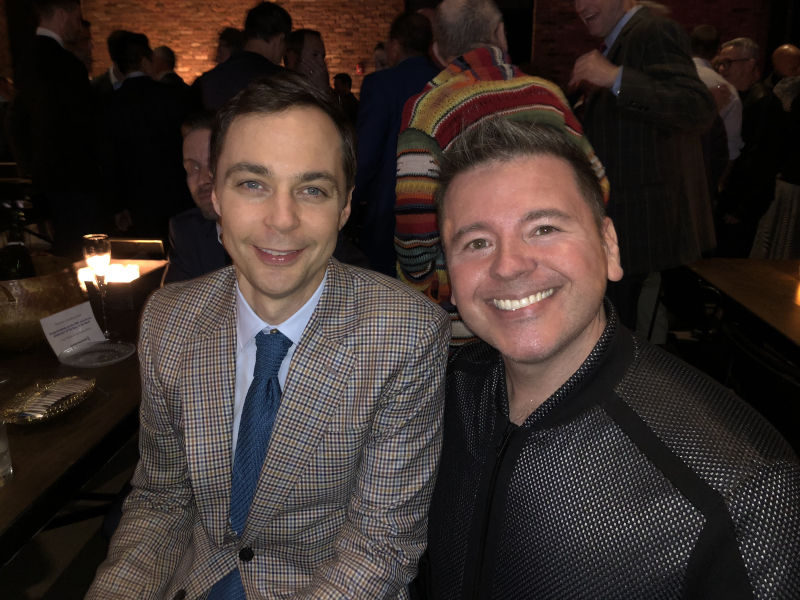 The actors were mostly very, very nice, and for a change I had things to say other than asking f 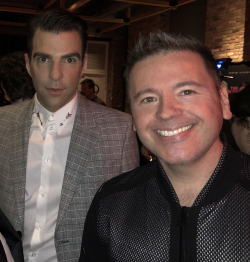 or a photo since I'm so familiar with the play and told them I'd seen the first preview as well as that evening's performance. Robin (best-dressed? I liked Charlie's look, too) was curious about differences I'd detected, and he told me the slight changes in some of his character Emory's dialogue were not his doing. Zachary Quinto was pretty ready to not pose with us, but I can't complain; I told him he was a most worthy Harold and I suspect and hope he knows it.

Matt Bomer, dazzling to look at, was interested in my observation that his 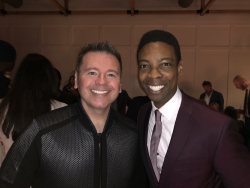 character, Donald, came off (thanks to him) as having more of an inner life than I'd noticed before. He also graced me with two photos when the first try resulted in no flash.

Jim Parsons is the lynchpin of the play and hurt his ankle not long ago, but he wasn't displaying any signs of feeling the pressure. He actually looked ... radiant?! ... seated (in order to rest the healing ankle) and, like Bomer, was keenly interested in my comments about his performance. 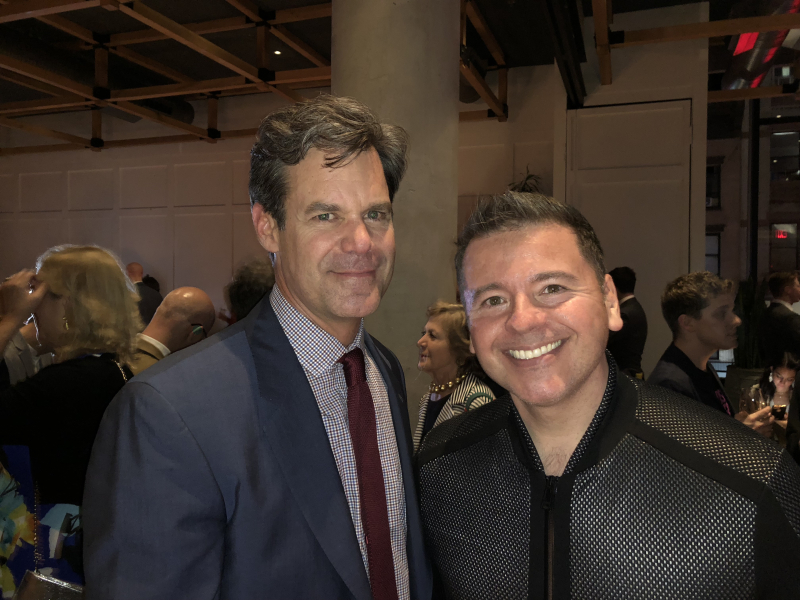 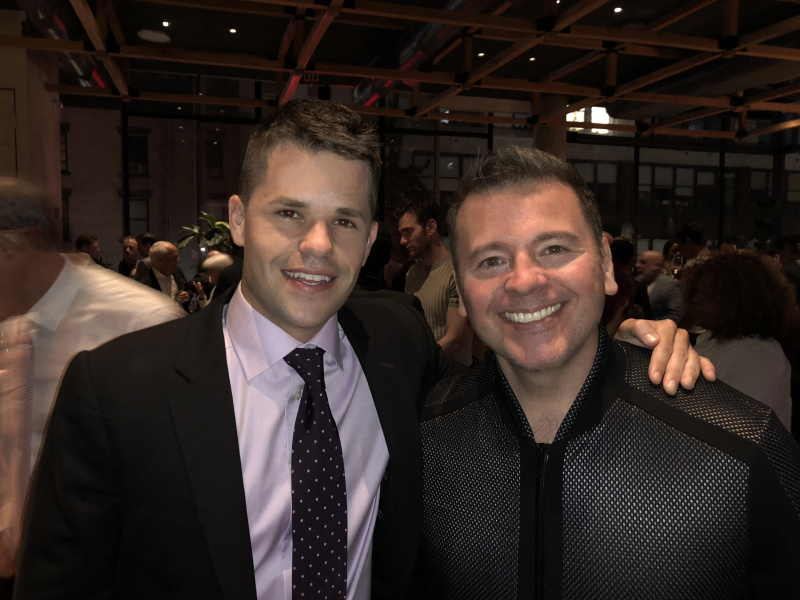 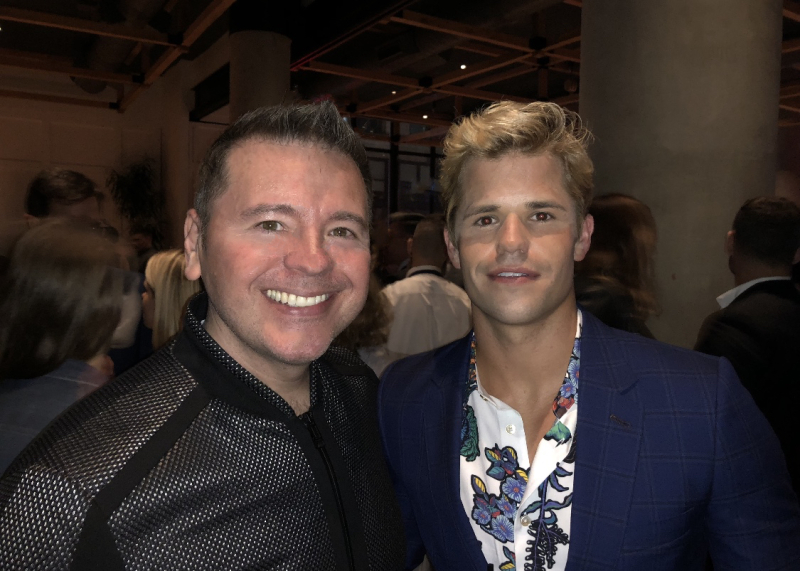 Tuc Watkins was the most relaxed out of everyone, so I was able to chat with him a bit longer. 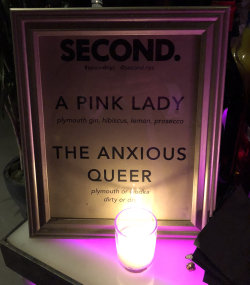 He expressed gratitude toward Larry Luckinbill, whom he said had made it clear he was passing the baton on the role he'd played. Watching Luckinbill hug him while wife Lucie sneaked iPhone pictures was so sweet. Watching Brian Hutchison chatting with Peter White as they discussed their (very different) Alans was also stirring.

Michael Benjamin Washington and Andrew Rannells were similarly kind. I was really wowed to discover that Andrew is so tall (as is everyone in the cast except for Robin, which works visually since Robin's character is a “chicken wing”).

The Carver brothers are just so hard not to stare at. Max was there with Sarah Sutherland of Veep 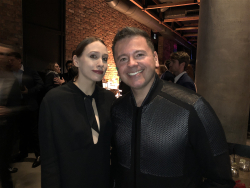 (told her how obsessed I am with that show and how much I love her character and she was humble and gracious), and both Max and Charlie were way indulgent with all the gay men seeking selfies. Max told me he was proud of Charlie, and he should be — Charlie's part is the smallest and some of his lines are barely written to be jokes, per se, but he gets big laughs with them all and a huge cheer on his exit line, which as written really isn't that funny. 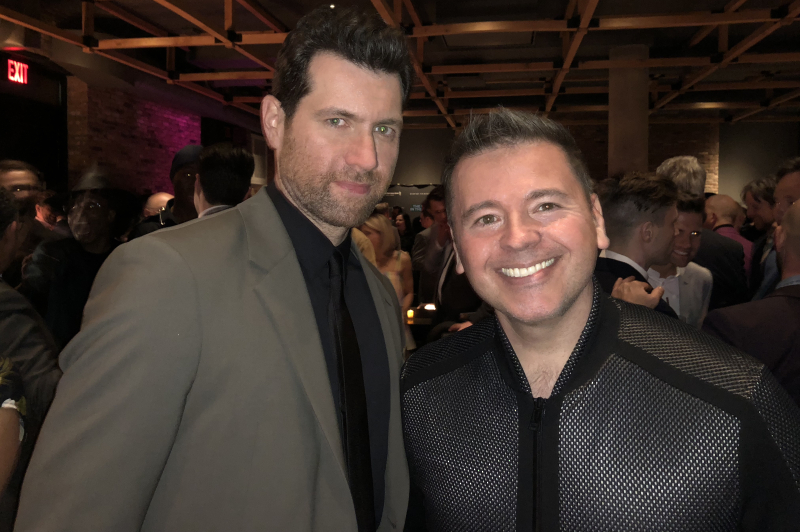 It was also nice chatting with Taylor Frey (whose husband is Kyle Dean Massey, one of the play's understudies), whose GBF producer Stephen Israel is the lead producer of my upcoming Boy Culture: The Series. And Billy Eichner! He was super funny — I told him he should take over one of the parts and he haughtily said, jokingly, “I don't replace.”

It was a celebratory night, one I'm grateful not to have missed, and one that was a long time coming for a historically important and still relevant gay play.