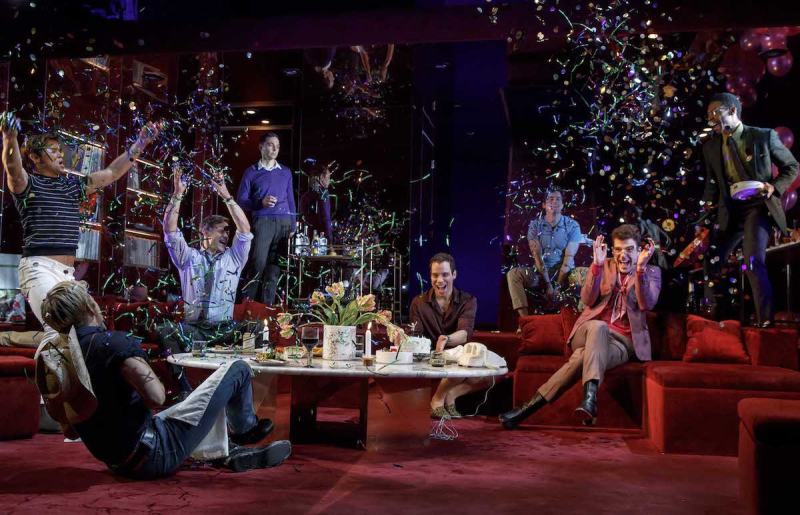 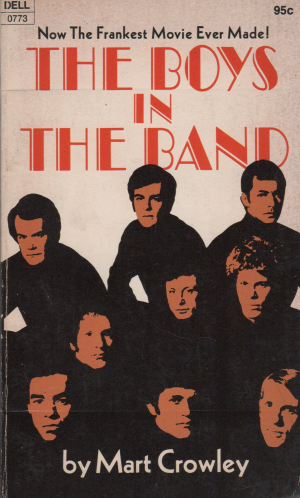 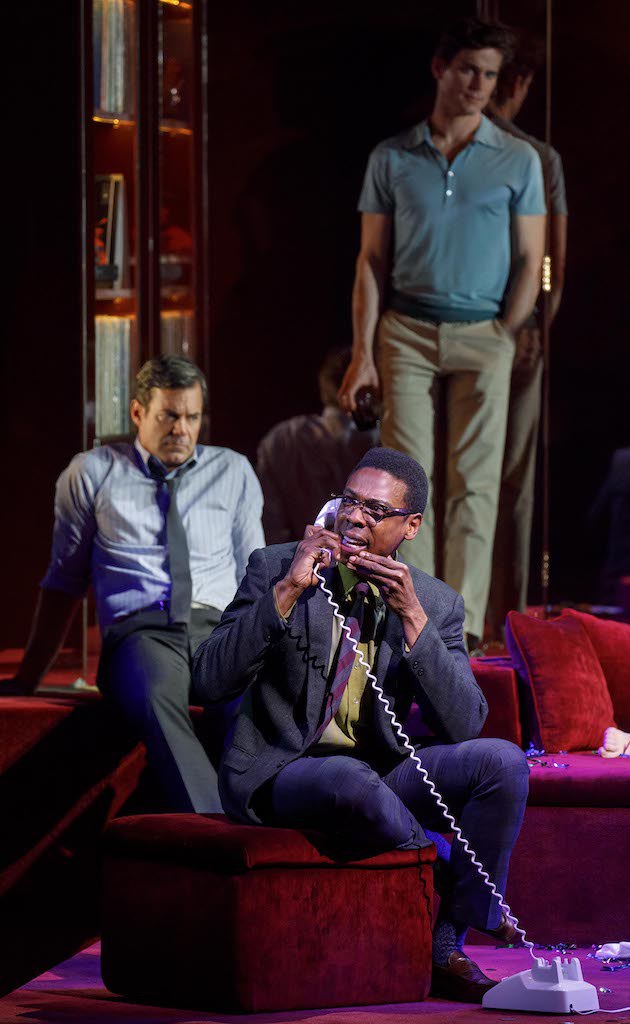 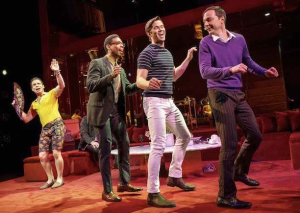 and Ryan Murphy, and directed by the ubiquitous Joe Mantello, things are mostly as we left them with the Boys, albeit with fewer pop-culture references (who would recall Rita Hayworth and Sebastian Venable now anyway, in the age of Kim Kardashian: prison-reform expert?) and a set so exquisite it looks move-in-ready. There is a timelessness to the apartment in which all the action takes place — a magenta duplex with chic spaces sectioned off by glass and mirrors as if a commentary on the compartmentalization in which the gay characters on the stage must indulge.

It's 1968, as the use of rotary phones reminds, but visually, the show looks contemporary, a choice that underscores the play's relevance.

Massive Recap of the Original Boys in the Band! — HERE

Michael (Jim Parsons) is throwing a birthday bash for Harold (Zachary Quinto), the world's first frenemy, with the moral support of his onetime trick and forever friend, blue-collar bookworm Donald (Matt Bomer). The expected guests are shameless flamer Emory (Robin de Jesús); warring couple Hank (Tuc Watkins), a bisexual with a decided preference for men, and Larry (Andrew Rannells), an unapologetic run-around; and young professional Bernard (Michael Benjamin Washington). The evening's unexpected guests will be a bleached-blond hustler in cowboy drag (Charlie Carver) meant to be Harold's gift from Emory, as good a bargain at $20 as any I've ever seen; and Alan (Brian Hutchison), a presumably straight friend of Michael's from college who calls him in the middle of a murky personal crisis.

Michael is a bundle of nerves, having planned what he hopes will be a flawless evening, one to impress his friends and to continue to convince them to think of him as a man of sophistication and class, not a poor boy from North Carolina whose expensive taste is rarely paid for, yet often indulged. Donald is his stoic rock, but he isn't enough of an anchor to keep the host from falling off the wagon, not with the stress of Alan's surprise visit, Harold's beyond-bitchy judgment, and the complex dynamics of a roomful of gay friends, lovers, and rivals, to torture him. 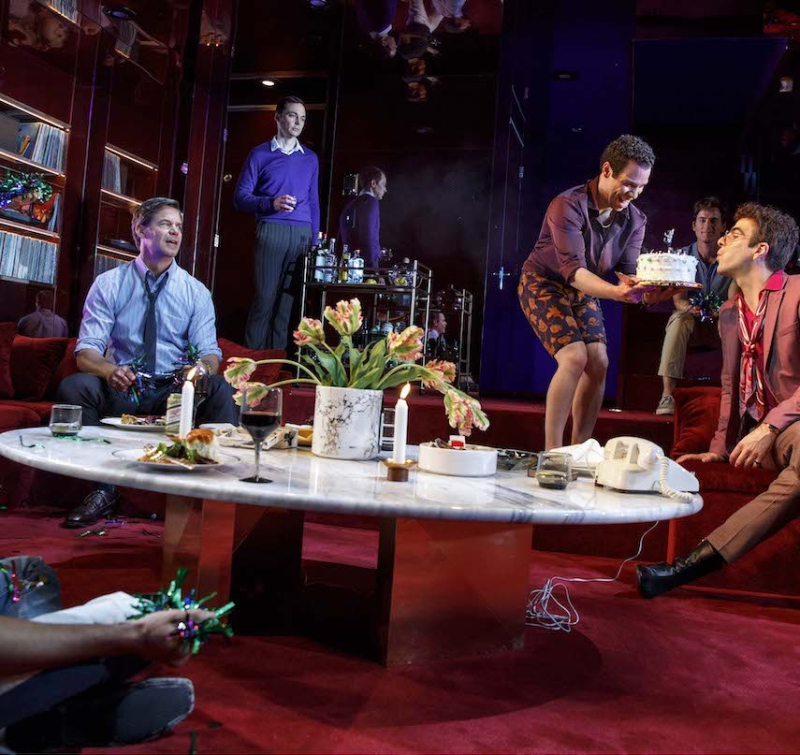 Emory takes — and gives — the cake.

In short, if there's one thing he's not ready for, it's screaming queens singing Happy Birthday.

Over the course of the evening, patrician Alan will snap and assault Emory, who has been egging him on, and mean-drunk Michael will encourage his guests/guinea pigs to play a game he calls The Affairs of the Heart, in which each guy gets points for calling the one person they've ever truly loved, identifying themselves, and telling the person on the other end of the line they love them.

Harold knows right away it's “hateful,” so he's one of the smart ones who declines to play. But many of the others take the risk, with some coming away deeply wounded, and a couple of others winning both the game and each other's trust.

By evening's end, Michael has revealed his shortcomings — a temper as bad as Maria Montez's acting, 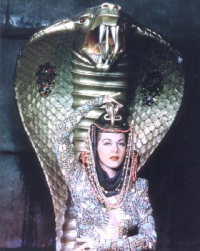 a tendency toward race-baiting, a penchant for bullying, wholesale hypocrisy — and his friends have retreated to their corners, leaving the audience to wonder if anything will ever be the same again between them.

As Michael, Parsons has the heaviest lifting to do, having to create a man we like, but whose actions we will soon deplore. His performance has enough of the frenetic energy of the late Kenneth Nelson (who originated the role) to be reminiscent of it, but a more modern delivery that tamps down the camp. If anything, he is too likable; it is almost hard to believe it when he spits venom, especially when he sinks into racism and anti-Semitism to put guests in their place. (It doesn't help that the actor is unable to make the “p-p-p-p-a-a-a-h labial lip noise” required as he sneeringly imitates lazy “nigras” down South.) But having seen his performance evolve from the first preview to this latest installment, I think he's made remarkable progress, creating a new Michael, one who is more sympathetic, more vulnerable. His palpable fear of Harold — and of Harold's deft manipulation of that fear — truly registers.

Harold was always the flashiest, most satisfying part in this play, and Quinto lives up to it, slithering about the stage, languid in his confident supremacy, rising to strike when provoked. By the time he warns Michael not to warn him, the audience is preemptively cheering his predatory words.

The biggest surprises for me about this production are the differences in Donald, Emory and Larry. 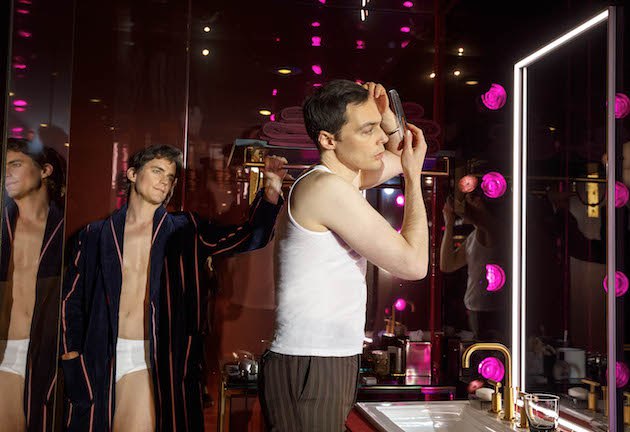 Donald is one of the many that got away from Michael — or that he drove away.

Matt Bomer imbues affable Donald with an inner life that simply doesn't exist in the movie. He is emotionally layered, not just a sidekick. Bomer mostly does this by choosing to make Donald more seductive, more introspective. He has genuine affection for Michael, but enjoys teasing him, and when he talks about his “prick quack” shrink, it isn't just for laughs — it conjures up a far more complex image of him than is typically portrayed. 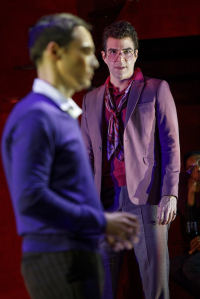 someone please get him into an adaptation from Dancer from the Dance and give this queen her triple crown.

Emory rivals Harold as the play's most memorable figure, and it's impossible to forget real-life hetero Cliff Gorman's shrill, singular “butterfly-in-heat” performance, but though de Jesús nails the character's fragility while calling up the love of his life, he sometimes holds back, making the character less over-the-top and perhaps occasionally too close in tone to that of Michael.

Larry's part feels expanded. If it isn't, then the line readings have new emphases by Rannells, who turns Larry into more of a wisecracker, earning unexpectedly uproarious responses. It works with his character, and the note-perfect Tuc Watkins is  a good choice, their age difference informing their debate about monogamy. That debate is still going on today.

Michael Benjamin Washington is convincing as a black gay man who has had to make concessions to get where he is (in a searing touch, his accent changes to a deferential, less cultured one when he speaks by phone to the woman his mother worked for as a laundress) and who knows exactly why he allows his friend, Emory, to belittle him. Charlie Carver, given the lightest part, kills with lines that are not particularly funny as written, including an exit line that brings down the house. 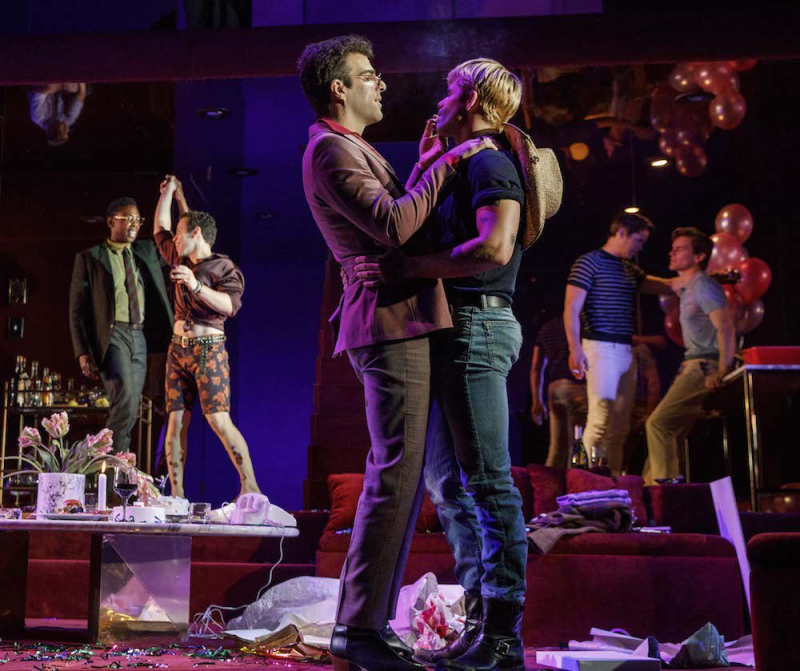 He tries his best. And Harold tries Cowboy's best, too.

Perhaps the most difficult performance to cotton to is that of Hutchison. Alan's always been somewhat opaque, and while the movie gives him extra scenes when he first calls Michael, the play keeps him off to the side most of the time, or drunkenly strewn on the floor, mulling his internal strife while the others lob one-liners. The central question of the play is whether Alan is a closet case, or Michael just wants him to be, but I've yet to see a version that makes me seriously doubt he's with the band, and this one is no exception.

If the production has flaws, they are not fatal: it gets shouty, some of the timing of the one-liners feels off, I don't know why Emory says the anachronistic “see you next Tuesday” instead of “SuperCunt” (but can guess why “black-eyed pea” replaces “pickaninny”) a revelatory story Michael tells in the script about his coddling mother is jettisoned, some acknowledgment that Emory is now a Latina would be nice, they should all be 40 and not 32 since 40 is the new — oh, Mary, don't ask. 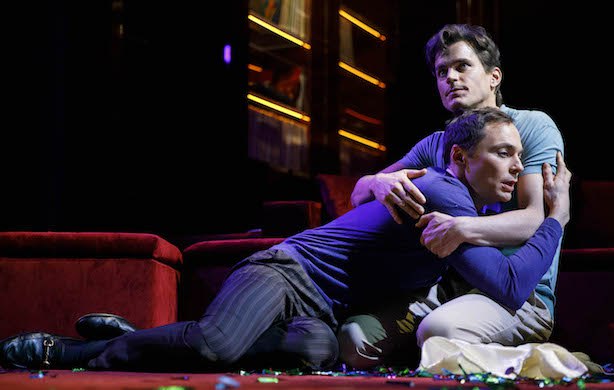 Overall, and more than ever, The Boys in the Band is the gayest story ever told — written and produced by out gay men, acted by out gay men and, most importantly of all, honestly and earnestly about gay men.