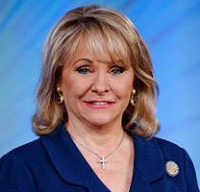 Guess the idea is that it's better for kids to be raised in an orphanage with no parents at all rather than to have GASP! gay parents.

Now, it's LGBTQ rights groups' chance to fight back ...

Fallin says the law does not restrict LGBTQ couples from adopting. While that may be technically true, it would allow agencies to reject couples “in accordance with their beliefs” ― that is, because those couples are in the LGBTQ community.

“Rather than stand up to religious fanaticism, the governor has chosen to reinforce the delusions of those who confuse discrimination with liberty,” Oklahoma ACLU external affairs director Allie Shinn said. “This measure serves no legitimate policy purpose.”

Two state equal rights groups, Freedom Oklahoma and Oklahomans For Equality, said they are looking into or will take legal action.

I would say I'm glad these groups will sue Oklahoma back into the Stone Age, but it's clear Oklahoma's one of several states that's comfortably in that time period already.